The pelagic ocean community is often called the blue water community and it extends from the water’s surface to 600 feet deep. The animals in this community have no seaweed, rocks, or ocean floor to hide in. In order to survive in this community, the animals must rely on their speed to escape predators. 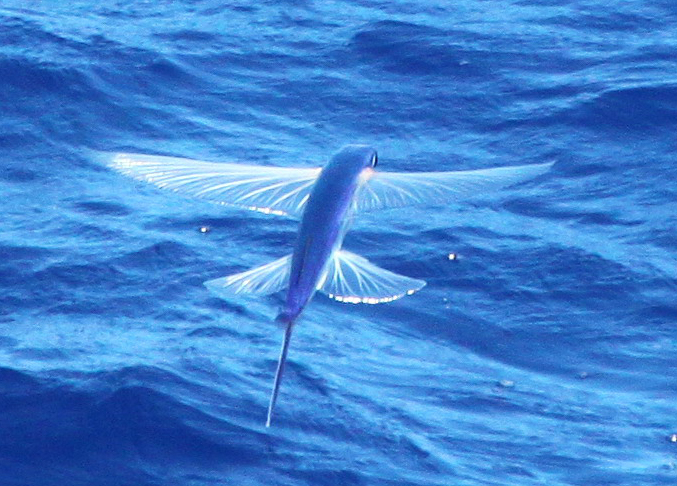 Who ever heard of a fish that can fly?  Well, that is one of the reasons I started to study these amazing fish.  The fish don’t actually fly but rather glide, they do this by swimming very fast underwater and then launch themselves above the surface while keeping the lower part of the tail in the water moving side-to-side.  At the same time they spread their large fins to catch the air and glide, sometimes as far as three football fields.  They do this to escape other fish that are trying to eat them.  I never get tired of watching these fish in the air. Marine Biologist, Jim Cotton 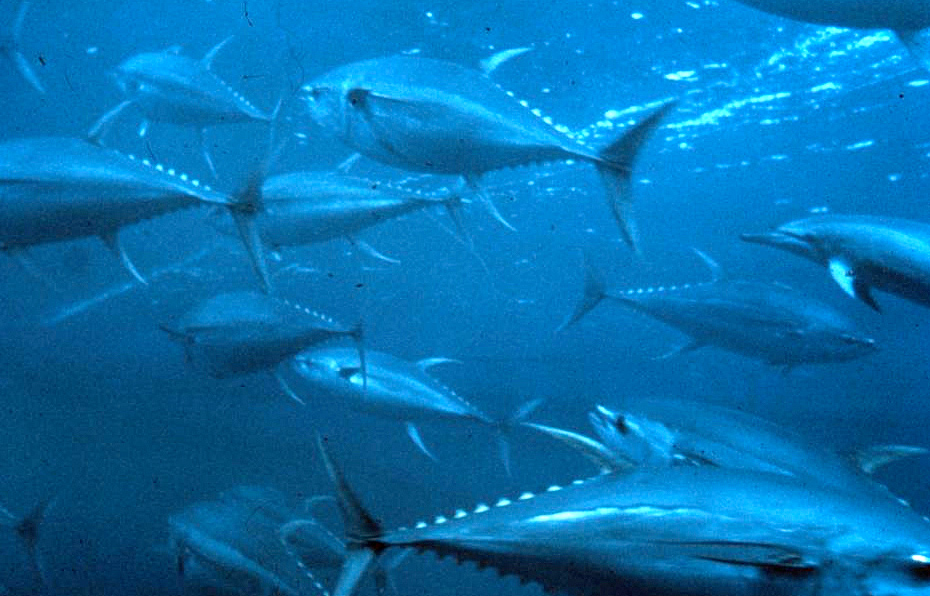 Tuna can weigh over 1000 pounds. The tuna is one of the fastest fish in the world, swimming up to 50 miles per hour. It is a schooling fish and undertakes great migrations, often swimming an entire ocean in a year.

Yellowfin tuna are often found in mixed schools with dolphins. This created an environmental problem over 40 years ago.  American tuna fisherman used to set their nets around dolphin schools because there was tuna swimming with the dolphins. The dolphins would not jump over the nets and thousands of them drowned in the process. Today, all of the canned tuna found in supermarkets in the United States has a label on it that says “Dolphin Safe,  which means that the tuna was not caught with dolphins. 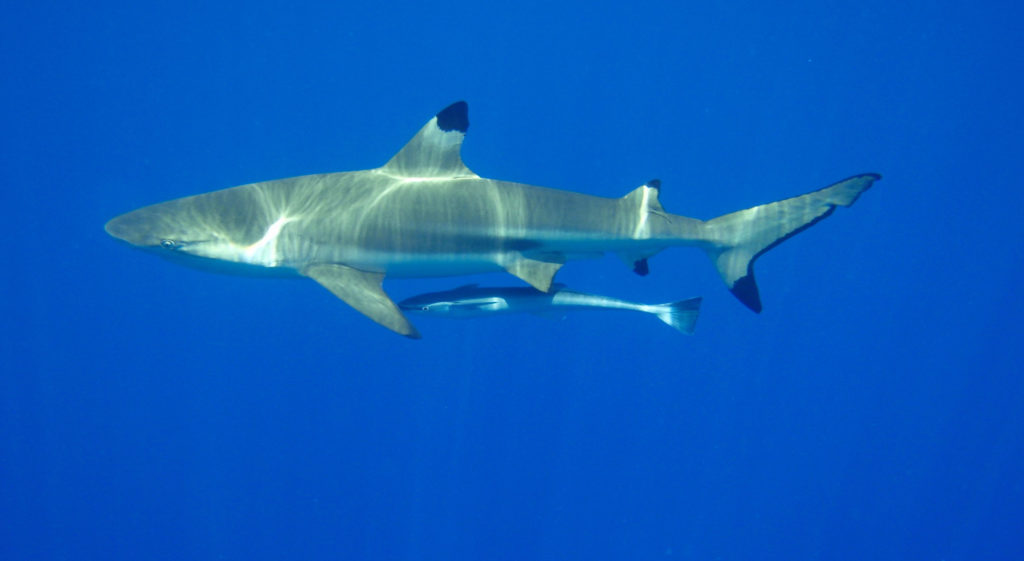 Sharks are top predators. They are some of the fastest fish on earth, capable of bursts of over 30 miles per hour. They feed on many types of fish and have often been referred to as “perfect killing machines.” They can detect small quantities of blood in water (equivalent to one drop in twenty-five gallons of water) at distances of greater than a quarter of a mile. The teeth of sharks are adapted for slicing and are one of the hardest materials produced by an animal. The teeth are loosely set into the jaw of the shark. In 10 years, a shark may lose as many as 20,000 teeth.

Photographer Jen Ganley said this about her experience swimming with the sharks:
I was petrified to swim with the sharks, and it took me 15 minutes of hanging on to the boat’s ladder until I mustered up enough courage to put my face into the water.  It was a completely different world down below, with hundreds of purple trigger fish swimming all around the sharks.  Once I felt comfortable enough, I let go and enjoyed snorkeling with the peaceful sharks!” 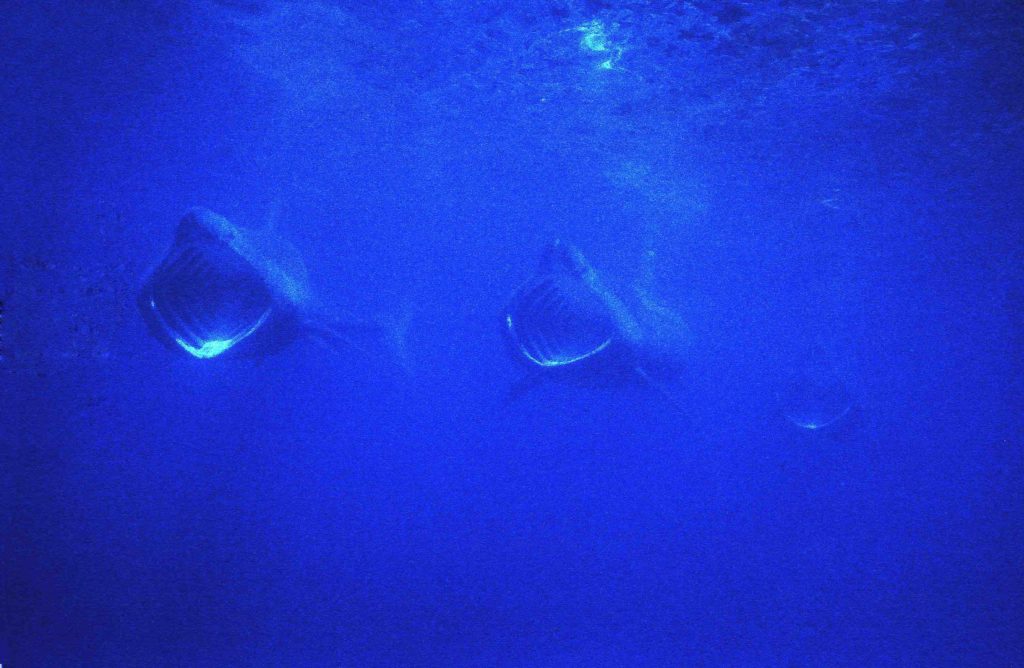 Basking sharks are one of the largest fish in the world, getting up to 40 feet in length. Basking sharks are usually seen swimming slowly at the surface with their mouth wide open, taking in a continuous flow of water while feeding. The basking shark is a filter feeder, preying upon zooplankton which are abundant in the summer. The shark strains the plankton through its long gill rakers. In the winter, it sheds the rakers and is believed to hibernate or feed on bottom-dwelling creatures.

Basking sharks are a “Threatened Species” due to overfishing. They were hunted for their oil, meat, fins and liver. Only Japan and China still hunt them for their fins because they are the main ingredient in shark fin soup. A pair of fins will sell for $1000 in Asian fish markets. The basking shark liver is vitamin rich and huge, taking up almost ¼ of the weight of the shark.

Sea turtle fossils date back as far as 100 million years. Leatherback turtles are the largest of all sea turtles growing over five feet in length and weighing up to 1500 pounds. Their shell feels rubbery, not hard like most turtles. Leatherbacks may live up to 40 years. They eat jellyfish, and sometimes confuse plastic bags as potential food. The bags may lodge in the turtle’s esophagus and the turtle will die from starvation. Female leatherbacks only come to shore to lay their eggs and the males never leave the ocean during their lifetime. They are powerful swimmers and can dive up to a depth of 4000 feet. 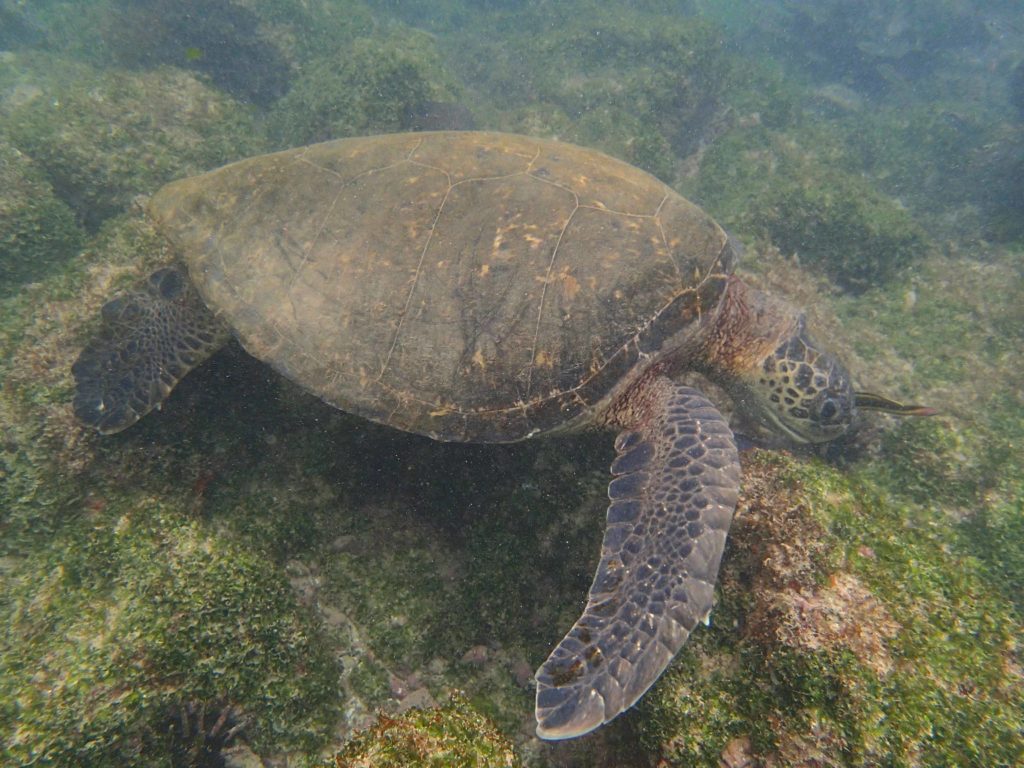 The green sea turtle is the most common turtle in the world. A female turtle will come ashore to lay her eggs at night. In the past, turtle populations were harmed tremendously by poachers taking the eggs. Currently, turtle populations are increasing due to protection given by local natives who realize that turtles are an important tourist attraction.