The text and photos were submitted by John Allen, Minnetonka, MN, May 10, 2013 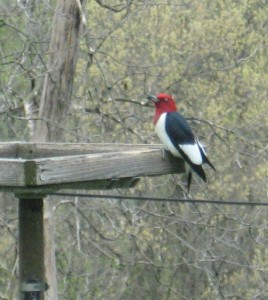 “I was so overjoyed to see my first red-headed woodpecker since childhood, so I had to tell someone who truly understood the wonder of seeing special creatures from one’s past. Many people say they see them often and then I must remind them that a woodpecker with a red head is not often a red-headed woodpecker. It seems that he is very interested in the recently added dried meal worms which Anita gave me as a birthday gift.  I have a block of suet suspended below the feeder tray that he has so far ignored.  He is a very friendly fellow who often shares the tray with blue jays, cowbirds, cardinals and the smaller birds as well.  He is definitely not a bully but neither is he to be bullied.  As an octogenarian-plus I had never expected to see this bird that was so much a part of my childhood years on a southern Minnesota farm.  I suspect they liked the dead branches of the many huge cottonwoods in our farm grove.” 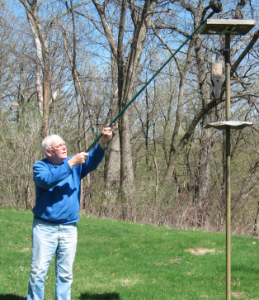 [editor: John’s connection and caring for the Earth comes through in his writing. He has a tremendous sense of wonder and respect for living things. Reading between the lines, you can feel the wisdom that oozes out of him. John has a land ethic that too few of us embrace. If we all strove to respect the land and the living things, our planet would be a better place.]