Napoleon Wrasse, Red Sea, Egypt (Jane Ball)
The Napoleon Wrasse is also called the Humphead Wrasse. This fish can get up to 6 ft and weigh 400lbs. Males have a large bulge on its forehead. Napoleon Wrasse can live up to 30 years.

The coral reef is an important ecosystem. The Great Barrier Reef, in Australia, can be seen from outer space and is the largest living ecosystem in the world. Twenty-five percent of all species living in the ocean are found in or around coral reefs. The main building block of a coral reef is the coral itself. Without the coral, creatures that live on the reef could not exist. The coral provides homes for creatures and is even eaten by many reef fish. 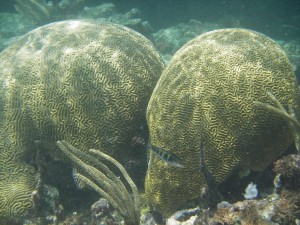 What exactly is coral? Coral is actually a colony of animals that live together within a common skeleton. A reef may consist of billions of individual animals called coral polyps. Each polyp has tentacles (to feed on phytoplankton), a mouth, stomach, and algae (plants) that live inside of it. The algae are called Zooxanthellae. The “animal part” of the coral polyp provides waste material and CO2 for the algae . In turn, the coral may use food and oxygen produced by the algae. Without 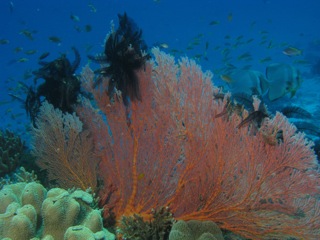 the algae, the coral would not be able to create its skeleton, which forms the reef. Reefs are made of coral limestone and laid down by the algae at rate of 1 inch/year. The Zooxanthellae algae need sunlight to live, and because of this coral reefs are found only in shallow water (less than 300 feet). 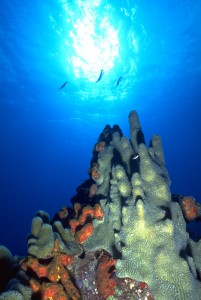 There are more than 2500 species of coral that are divided into two basic groups: hard coral and soft coral. The brain coral is a type of hard coral that builds the reef. Another hard coral, pillar coral grows upwards to eight feet above the sea floor. Elkhorn coral  provides ledges and holes for reef fish to hide in. Coral reefs grow very slowly (1 inch/year) and take hundreds of years to actually form. The sea fan (upper right), is a type of soft coral. It is flexible and moves with the currents, but soft corals do not help build reefs. 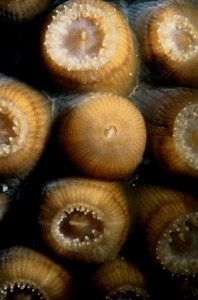 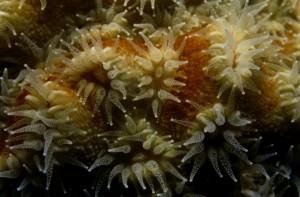 The coral’s polyps are used to capture phytoplankton from the water. The polyp has stinging cells, which they use to paralyze the plankton. When the polyps extend their tentacles, they form a mesh, which catches passing plankton. To protect themselves from reef fish, many corals feed at night. During the day, the polyps withdraw its
tentacles into the coral skeleton. 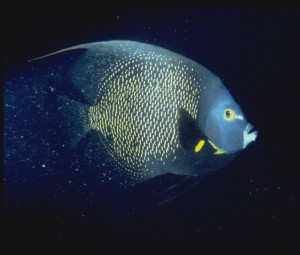 Angelfish are some of the most beautiful fish found on the coral reef. Angelfish are active on the reef during the day and are often found in pairs (they mate for life). They rest at night in hiding places along the reef. Angelfish are flattened along the sides of their body. This body shape allows them to find food or hide from potential predators in tight places.They feed on sponges, algae and sea fans. 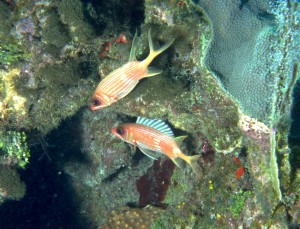 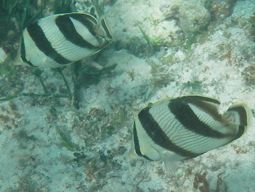 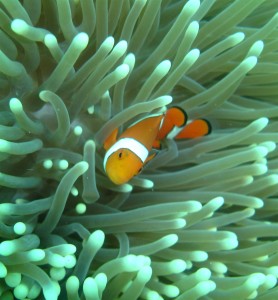 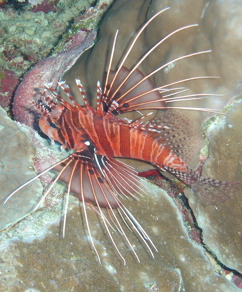 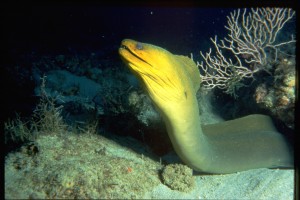 Moray eel coming out of its hole (Jane Ball)

Moray eels play an important role on the coral reef. A large part of their diet is feeding on weakened creatures. In doing so, they help keep the reef populations healthy. Eels make their homes in dark holes and feed mostly at night. They get up to 10 feet in length and have snake-like bodies that allow them to curl up in small crevices. Eels feed on fish, squid, and crab-like animals. An eel will wait and ambush its prey. Although, they have poor eyesight, eels have a keen sense of smell that allows them to locate potential prey. Eels have long needle-like teeth to help them grab and hold fish. Moray eels look vicious, but are generally not a threat to humans. However, if an eel is wounded or disturbed it may give a nasty bite. 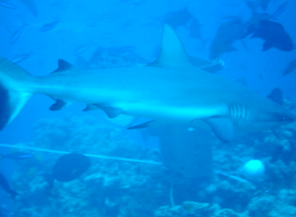 Sharks are the top predator on the reef. A shark is one of the fastest fish on earth, capable of bursts of over 30 miles per hour. Sharks feed on many types of reef fish and have often been referred to as “perfect killing machines”. They can detect small quantities of blood in water (equivalent to one drop in twenty-five gallons of water) at distances of greater than a quarter of a mile.

Sharks also have the ability to detect minute amounts of electrical energy given off by possible prey species. The hammerhead has many sensory detectors that allow it to find prey easily. During the day, hammerheads will swim in large schools (photo to the right), and then at night hunt for food alone. 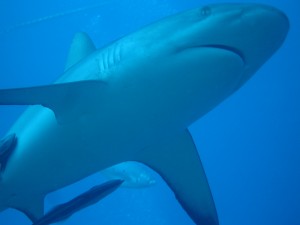 The teeth of sharks are adapted for slicing and are one of the hardest materials produced by an animal. The teeth are loosely set into the jaw of the shark. In 10 years a shark may lose as many as 20,000 teeth. Sharks have strong jaw muscles, capable of biting with a pressure of 44,000 pounds per square inch (a human exerts only 150 pounds per square inch.)

Barracuda are important predators on the coral reef. They are sleek, powerful fish that get up to six feet in length and weigh over a 100 pounds. They have fang-like teeth and powerful jaws.When hunting, they will wait and ambush unsuspecting prey. A barracuda’s body shape allows it to strike its prey with lightning speed. A larger barracuda may herd a school of reef fish into shallow water and watch over them until it is ready for another meal.In spite of its reputation as a man killer, there have been very few attacks ( only a few dozen) on humans by barracuda.

Potato cod, as it is known in Australia, is a member of the grouper family. A similar species which lives in coral reefs in the Caribbean and Florida, is the goliath grouper. It grows to over 8 feet in length and weigh up to 700 pounds.Goliath grouper and potato cod are predators and feed largely on lobster, crabs, parrotfish, rays, octopus, and even young sea turtles. They like to ambush prey by hiding behind coral and waiting for it to swim by. A grouper has such a large mouth that it may eat its prey in a single bite. 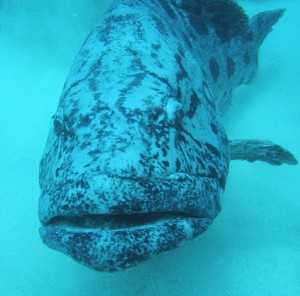 Goliath grouper are found on shallow reefs less than 150 ft. deep. Normally the potato cod and goliath grouper live alone in the same reef area for many years. However, during mating season, they may travel as much as 50 miles offshore and join groups of up to 100 fish for spawning.It takes several years for a goliath grouper to become an adult and spawn (lay eggs). They are slow growing animals, with the largest groupers possibly living as long as 50 years. The largest animals are most important for spawning because they lay the most eggs.In the past, large groupers were targeted by sport fisherman, and the population was reduced severely. The goliath grouper is an endangered species and has been protected since 1990. Also, the potato cod is protected off the Great Barrier Reef of Australia. 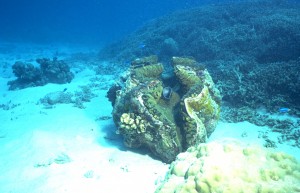 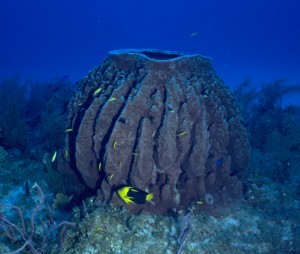 Giant clams get up to four feet across and weigh over 500 pounds. In the western Pacific, the giant clam is rare because so many have been eaten. Gian clams feed on microscopic phytoplankton that are around the reef. Giant clams may live more than a 100 years. At one time this large clam was known as the “killer clam” because a person might get his/her arm stuck between its shells.

The barrel sponge looks more like a plant than an animal. But it is actually a very ancient, simple creature that has been on Earth for over 500 million years. The body of this primitive animal has thousands of small pores that allows water to flow in and out of its body. The pores are used to filter phytoplankton for food. The pores also bring in oxygen and remove wastes from its body. Many types of animals may be found around barrel sponges. Small fish might use it as a hiding place and larger reef fish use it as a food source. 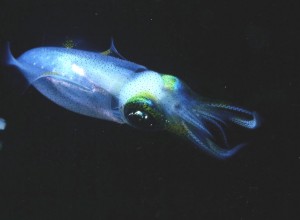 Cuttlefish are not fish at all but, closely related to squid. They feed on small fish, using their long tentacles to grab their prey. The cuttlefish have an a internal shell or “cuttlebone” which is used to keep the body rigid. To escape a predator, both the cuttlefish and octopus will emit ink through its siphon. Octopus hide in holes in the reef. The Blue Ringed Octopus is slightly larger than a golf ball, but it carries a deadly venom that will kill a human in minutes. In fact, a James Bond movie, Octopussy, featured the deadly animal. 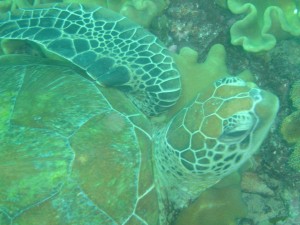 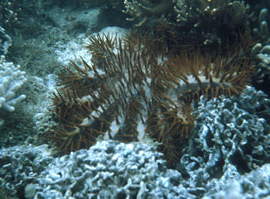 The crown of thorns is a sea star that eats coral polyps. Unfortunately, populations of the crown of thorns have increased greatly since the 1970’s. These animals are partly responsible for much of the loss of coral reefs around the world. They can wipe out large areas of coral in just one year. In addition, the starfish is capable of causing great pain, if accidentally touched by humans.The green sea turtle is the most common turtle found on coral reefs. They feed on turtle grass that grows in shallow water close to shore. Female turtles come ashore to lay their eggs at night. Turtle populations were harmed tremendously by poachers taking the eggs. Today, the number of turtles is increasing due to protection given by local natives, who realize that turtles are an important tourist attraction.

Survival on the Coral Reef 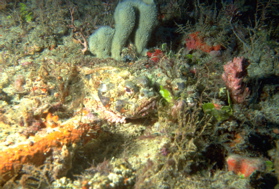 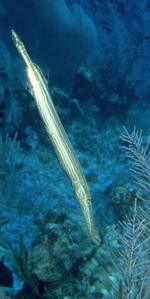 The cornetfish hangs in the water column looking like a piece of seaweed or a floating stick and waits for an unsuspecting fish to swim by. The mouth of a trumpetfish is tubular and the fish will suck up its prey with its straw-like mouth. The scorpionfish has hair-like objects hanging off of its head and fins that resemble algae. Since scorpionfish live on algae-covered sea floors, unsuspecting fish are ambushed and eaten by them. The scorpionfish has one of the deadliest poisons of any fish in the spines of its dorsal fin. The poison is lethal enough to kill a diver in two hours. 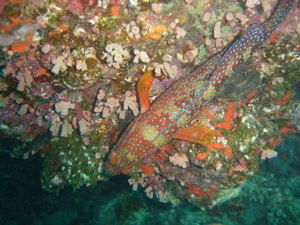 Spotted groupers have the ability to change colors to blend in with coral or algae. They are patient hunters, stalking their prey. Camouflage also helps them to hide from larger fish who might want to make a meal out of them. 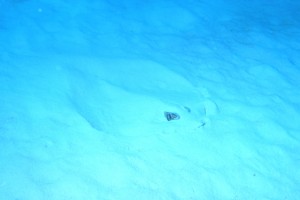 Rays live on the ocean floor in sandy habitats. A ray will flip sand over its body using its wing-like fins. Rays feed on clams and other bottom-dwellings animals by fanning the sand with their fins. People can be injured by sting rays as they walk in the shallow water along the beach. A sting ray spine is poisonous, and an injured person must get immediate medical attention. 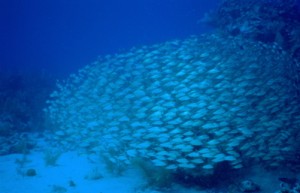 A small fish can survive on a coral reef if it is part of a school. This large group of fish looks like a larger fish to potential predators. When a school is threatened by a predator it forms a tighter mass. An individual fish in a school is less likely to be eaten than one not in a school.