Memorable People in My Life

Two of the most memorable men in my life in high school were my coaches.

In our little town of 4,000 if you were male and had a pulse, chances are you would be on a sports team. I was all in on sports because I loved the camaraderie of  football and basketball. Both of these men were excellent male role models for me.

Mr. Gordon Steward (on the right) was my track coach for four years. He was very a caring person and did not yell at anyone, but if I did something that was not right I could see the disappointment in his eyes and that was much worse than someone yelling at me. Coach Steward often gave me fatherly advice. He noticed I was dating and one day said to me “Lar, a stiff pecker has no conscious.” He always encouraged us to work hard in practice and do our best. At one track meet, I was asked to run a quarter mile split in the relay. I took the baton and moved over to the inside lane. After the race, one of my team mates told me that I was supposed to stay in my lane. Of course my time was very fast and the Coach was pretty excited about it. I did not have the courage to tell Coach Steward that my time was not accurate because I had changed lanes.

Claire Herrill (photo on the left)  was the varsity football coach. When I was 10 or 11, I used to see Mr. Herrill fishing on Sespe Creek for trout. My oldest brother played football and used imitate Herrill’s whinny voice.  “Wade, get in there and hit that guy”. My junior year, I went out for varsity football and played guard weighing 145 pounds. About mid season, I broken part of my vertebrae and was off the team. I worked out with weights and got up to 160 pounds that summer. I also painted Coach Herrill’s house with my friend Frank Drew and got to know Coach Herrill well.

Mr. Herrill was about as crusty a dude as I had seen. His whole body looked like roughed-up leather. He was a tough man, but he believed in us, maybe more than we did ourselves. 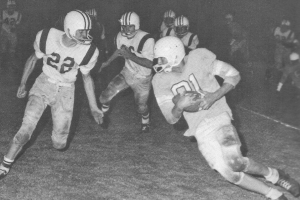 The year was 1966. The Fillmore Flashes record going into the last game against arch-rival, Santa Paula was 1-7.  Even though we looked horrible on paper, we loved our coach and being together. It is a wonderful feeling representing your school and your community by playing Friday night football. Most of us had gone to games since we were kids and had dreamed about this opportunity. Santa Paula was having a great year. They had some good players, but the night of the game, they were not prepared. They were joking around during warm-ups, and looking at our team like we were a bunch of losers.

The most important event of the game was actually after the game, when Coach Herrill came into the locker room. No one knew what to expect, but he had stood with us through every loss that season. He got a few words out, “I hated to see you lose that……” then broke down sobbing. It was the most honest and loving expression I had ever seen from a man in my 17 years. His caring energy for each us went right through us. The Santa Paula game was not a loss for any one who was in that locker room, and we walked out with pride. Coach Herrill was a tough guy, but he taught us that caring was more important than being tough. That is something I still believe today.

A while back someone told me that Coach Herrill had died. I would only hope that the funeral hall was filled with men whose lives had been touched by him.