Oceanography Lesson 2 – Features of the Sea floor and Climate Change

From: Whales in the Classroom – Oceanography
By Lawrence Wade

Features of the Sea Floor

The sea floor has many unique features. The mid ocean ridges are undersea mountain ranges that extends 42,000 miles throughout the Earth. The ocean trenches form the deepest areas of the oceans. There are undersea volcanic peaks called seamounts.

The drawing below shows some of the distinct features of the mid ocean topography. There is a second page showing the undersea coastal features. Download both the mid ocean and coastal pages. 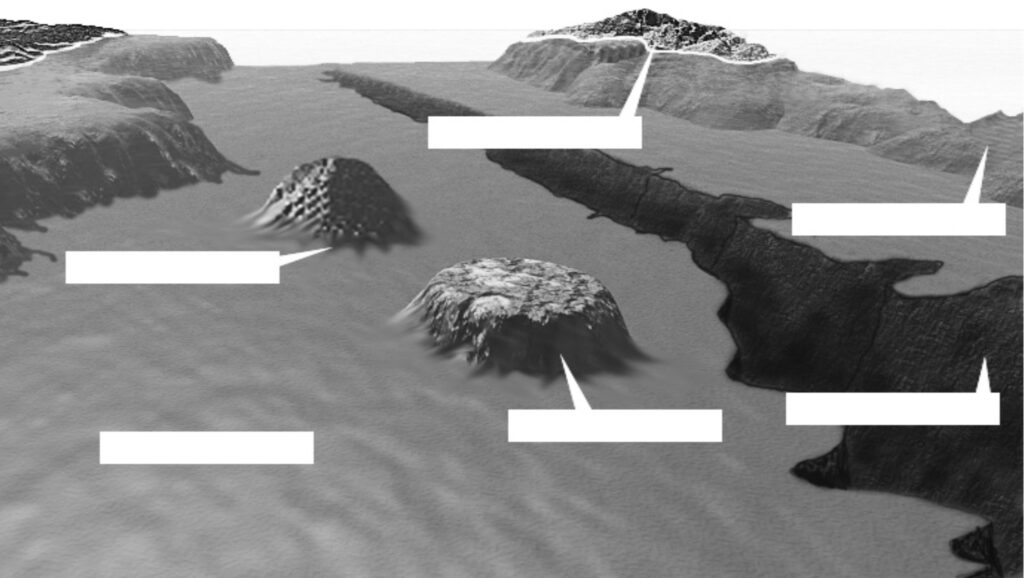 So You Want to Be an Oceanographer

Read the descriptions below of the ocean floor and label the geologic features on your downloaded pages. Even better make your own drawing of the sea floor and label each of the features.

Features of the Ocean Floor

Abyssal plain – The abyssal plain begins at the base of the continental slope, usually at least 2 miles (10,000 feet) deep. Much of the ocean floor is abyssal plain. These plains form the ocean basins of the world.

Estuary – An estuary is a salt-water bay that has a river emptying into it. Estuaries are important nursery areas for fish, shorebirds, and other sea animals to lay their eggs.

Island – Islands are the tops of ocean mountains that rise above the surface of the water. On the island of Hawaii, the twin peaks of Mauna Loa and Mauna Kea rise almost 14,000 feet above the sea. If you add in the depth of the adjacent sea floor (16,000 feet), these volcanic peaks, beginning at the ocean floor, are comparable in height to Mt. Everest.

Mid-ocean ridge – Mid-ocean ridges are undersea mountain ranges that extend approximately 42,000 miles and cover 23% of the Earth’s surface. This is the largest geological feature on the Earth, yet it was not explored extensively until the 1970s. The ridges occur where mantle material rises to the top of the Earth’s crust and spreads out to create a new ocean floor.

Ocean trench – Ocean trenches form the deepest areas of the oceans. The Mariana Trench is more than 7 miles deep. Many of the trenches are several hundred miles long and several miles wide. The ocean floor is very slowly disappearing into the ocean trenches, moving at a rate of approximately three inches per year.

Seamount – Seamounts are undersea volcanic peaks that are not part of an undersea mountain range. The top of a seamount forms a cone.

A Trip to the Ocean Floor  –   A Guided Imagery 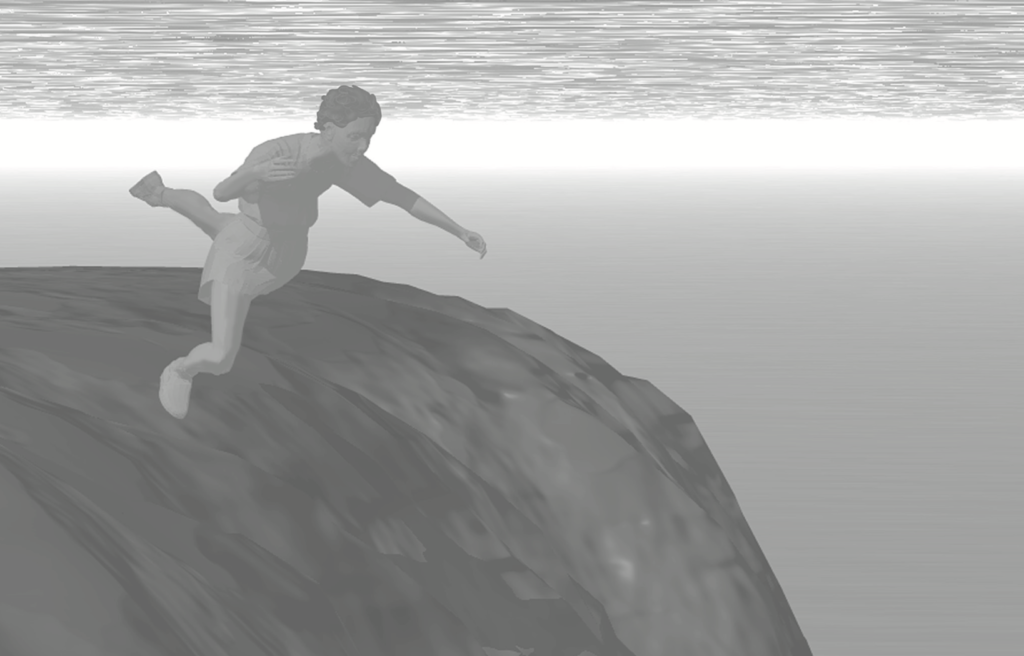 Take a journey in your mind into the oceans and explore the ocean floor. Swim through the breakers of a sandy beach and move to the edge of the continental shelf. Think about the steepest drop-off that you can imagine (mountain or building) and know that it is a short drop compared to this one. From the edge of the continental shelf to the floor of the abyssal plain it is over two miles—or greater than eight Empire State Buildings stacked on top of each other. You slowly swim down the continental slope to 10,000 feet deep. The pressure is enormous on your body. But it doesn’t bother you today.

It is dark in the abyss, but somehow you can see. You can see the great abyssal plain that stretches for hundreds of miles. You quickly move across the plain and can see the mid-ocean ridge, a huge mountain range that rises up above the plain. Most of the mountains in the mid-ocean ridge rise over 6,000 feet above the plain, but some of them are so huge that they rise above the water and form an island. You follow one of the tall ridges to the surface, then sink back to the depths. Along the mid- ocean ridge you find the place where the sea floor is being formed from molten lava. You can feel the heat because this lava is coming from below the ocean floor, in the mantle of the Earth itself. Just for a moment you imagine going into the core of the Earth.

Continuing your journey across the ocean, you leave the mid-ocean ridge and drop into another abyssal plain. It stretches a great distance, like a barren desert. At the far edge of the desert you see a huge canyon, called an ocean trench, that is over fifty miles wide and hundreds of miles long. You float above the ledge that leads into the ocean trench, the deepest of the ocean’s deep. As you swim down three miles beneath the surface… four …. five …….six……. seven miles, the pressure continues to build. Under normal circumstances you would be crushed, but not today. Finally you reach the bottom of the trench, it is a dark and lifeless place. As you swim upward, you can feel the pressure lessen on your body.

Finally you come to the edge of the continental slope on the other side of the ocean and can see it rise towards the surface. As you move up the edge of the slope, you start to see light above you. You continue swimming until you reach the surface of the water. Open your eyes, your journey is over.

Global warming is caused by excessive amounts of pollution (mostly CO2) in our atmosphere. Under normal conditions some of the heat from the sun is absorbed by the Earth, but most is reflected back into space through the atmosphere. When excessive amounts of CO2 and pollutants enter the Earth’s atmosphere less of the sun’s heat is able to escape and more is redirected back to Earth, causing global temperatures to rise.

If the Global Warming increases too much in the future, the average temperature of the Earth might rise as much as 10°F.  Drought, hurricanes, forest fires and extreme temperatures are what we call Climate Change. We are seeing the effects of Climate Change throughout the world. Also, the rise in temperature might cause melting of the polar ice caps. When this happens, sea level will rise and flood most of the cities located on the coasts, including New York City, Los Angeles, and San Francisco.

The average person can do a lot to reduce this problem. The burning of fossil fuels (oil and gas) at power plants and in automobiles is a primary cause of global warming and climate change. Individuals can conserve energy by reducing electrical usage in their homes, buying fuel-efficient automobiles, car-pooling, and using mass transit. Planting trees is another important activity that will help reduce Global Warming and Climate Change. Trees absorb carbon dioxide (CO2) directly from the air, and thus reduce the amount of CO2 in the atmosphere. 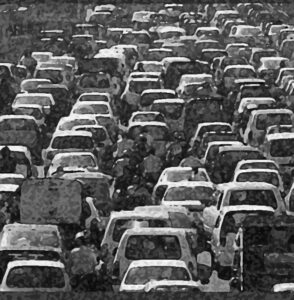 What Is Your Carbon Debt?

Every year humans are putting larger and larger amounts of carbon dioxide (CO2) into the atmosphere by driving automobiles. Living plants that absorb CO2 cannot process the amount of carbon that is being emitted into the air. To deal with this carbon debt, there is a growing conservation movement to plant more trees on our planet.

Download the following worksheet  to determine how many trees you should plant to pay your family’s carbon debt for their automobile. The trees may be planted over several years since they will continue to remove CO2 from the air for over a hundred years.

What is Your Carbon Debt?

Key for Features of the Ocean Floor