All photos by Old Naturalist, unless credited to another photographer. 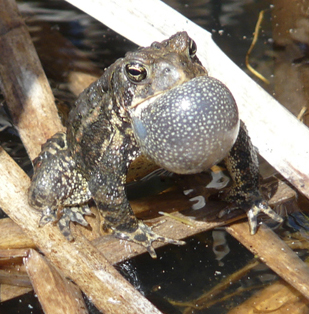 American toad calling in May. 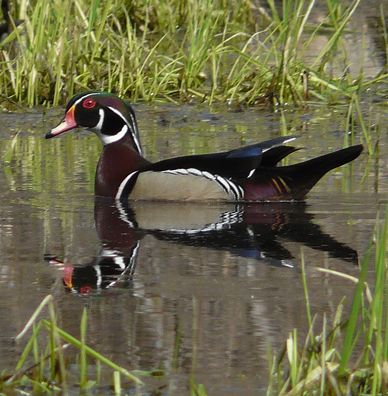 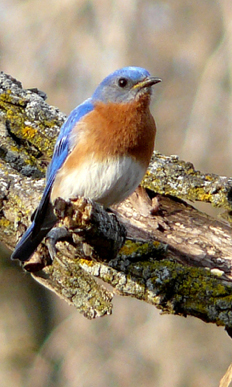 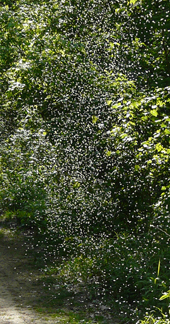 A gnat cloud in early May.

Download the Signs of Spring Activity. Answer the questions using the text below.   Click here for the PDF. 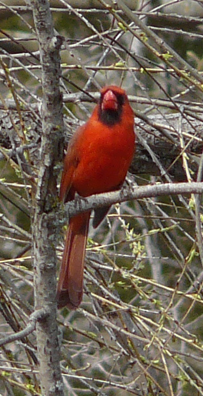 The cardinal begins singing its spring song in mid January to remind us that winter will end at some point. Its song, “what-cheer,cheer, cheer”, is a blessing to hear on cold winter mornings. Both the male and the female sing to announce to the world that they are setting up a nesting territory in the area.

In early March, the cardinals and chickadees sing constantly in the morning, filling the neighborhoods with a welcome sound. 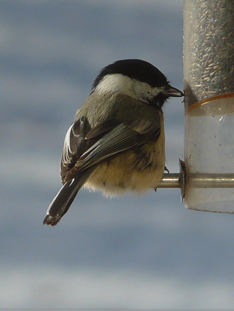 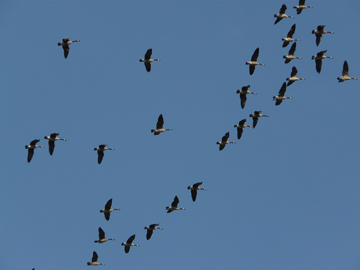 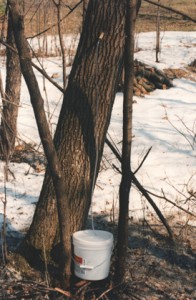 A box elder tree being tapped for sap.

In early March, when the temperature goes above 40° F, the sap begins to flow in the maple trees. The sap is collected and the water in the sap is boiled off to make maple syrup. The smell of boiling sap is one of the “smells of spring”. It takes forty gallons of maple sap to make one gallon of maple syrup. Sap flows in all trees, but it is only sweet in trees from the maple family (silver maple, sugar maple, box elder and red maple). I have made syrup from each of these trees and each tastes very unique.

Maple syrup was discovered by Native Americans hundreds of years ago. In late winter, the tribes would move to their spring sugaring camp. Native Americans did not initially have metal pots, and they used birch bark containers to catch the sap. The sap was boiled down by putting hot rocks in the birch containers.

The return of the robins occurs in mid March. For many Minnesotans, seeing the first robin signals the beginning of spring. The males arrive ahead of the females and stake out their territories. They begin singing “Cheeriup, cheerily, cheeriup” soon after their arrival. Male robins often return to the same area in successive seasons. So the robin that is in your yard, may have been there last spring. 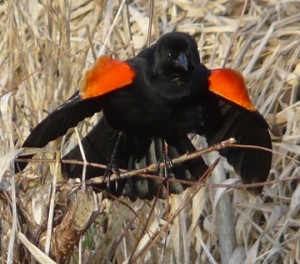 Red-wing blackbirds return to Minnesota by mid March. Their call, “O-ka-leee”, can be heard in our wetlands. The males return a month earlier than the females, and set up the nesting territory. 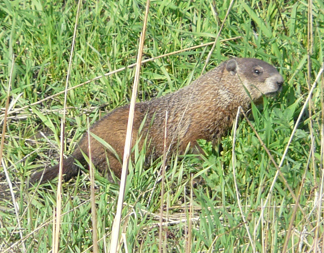 A groundhog feeding in early Spring.

We look for the first groundhog in mid March. Groundhogs go into their winter dens by early October and remain there for five months. During its state of hibernation, the heart beat drops from 200 beats per minute to 7 beats per minute; the body temperature drops to 38°F; and it breathes about once every 6 minutes. During hibernation, groundhogs are not eating and lose over 40% of their body weight. It is a miracle that they survive at all! 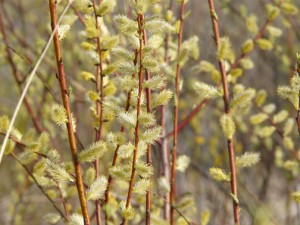 In late March, if the temperature goes above 40° F, the pussy willows magically appear in our local wetlands. The pussy willows are the silvery flowers of the willow tree. 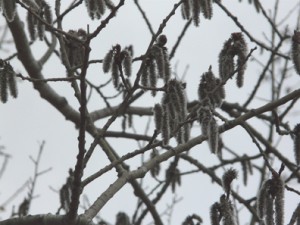 Quaking aspen flowers are called catkins and hang down from the trees before the leaves have developed. Catkins are visible in early April. After a week or so, the catkins fall to the ground. Many casual observers are fooled when they see catkins on the ground and think they are worms. 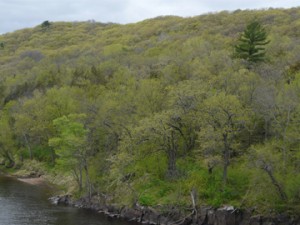 From mid April to early May in the upper Midwest, the tree canopy has what noted naturalist, Jim Gilbert, calls the “green tinge.” After the leave buds swell and young leaves emerge, the landscape starts to turn from gray to green.

Some butterflies hibernate as adults under the loose bark of trees. When the temperature gets above 50° F, usually in late March, spring butterflies leave their winter homes and feed on early wildflowers and maple sap. 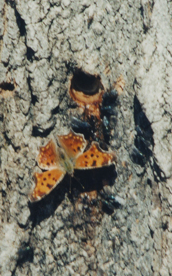 An anglewing feeding on maple sap in late March. 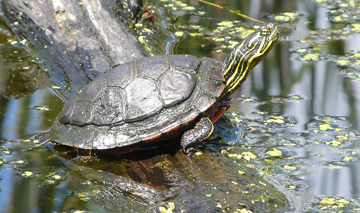 The first painted turtles are usually seen sunning on logs by mid April. If it is a warm sunny day, above 65° F, in mid April, turtles will most likely be out.
Turtles are cold-blooded, which means their body heat is generated from their surroundings. Reptiles do not create their own heat internally, like mammals do. The reason they are sunning is to increase their body temperature so that they can move around quickly and digest their food.

From late April through May, the woodland wildflowers are in full bloom. Trillium, bloodroot, jack-in-the pulpit, wild ginger, and bellwort are a few of the special wildflowers that make their appearance before the leaves are on the trees. 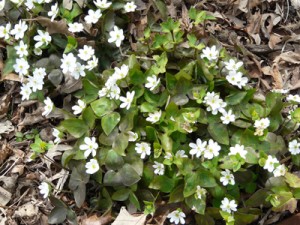 Woodland wildflowers are special because there is only a small window of time to see them and then they are gone till the following spring. 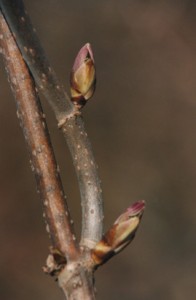 In mid April when the temperature goes above 50° F, the buds begin swelling in the shrubs and trees. After the buds swell, the new shoots of leaves and flowers appear. Elderberry buds which are pictured on the left, are the largest and most colorful of our native plants.

Forsythia is one of the first flowering plants to bloom. Look for Forsythia to be in bloom in the last week of April.

The frogs begin singing as soon as the ice is out in the ponds, usually in early April. The frogs come to the ponds to breed and the males “sing” to attract females to the pond. At times the sound can be extremely loud around a frog pond in the spring.

The first species of frog to come to the pond is the wood frog which makes a “clucking sound”. If I played a tape recording of a male wood frog in a pond, a male might aggressively come right up to me and begin calling. Also, wood frogs are quick breeders, staying in the pond for only a few weeks. 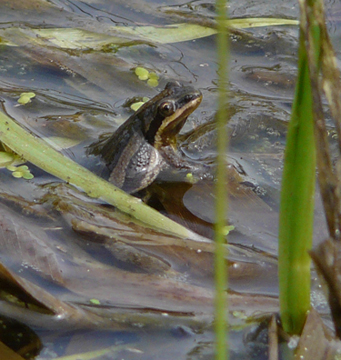 The chorus frog is the second frog to mate in our ponds (early April in the upper Midwest). These are very small frogs, but when they are calling in full force, the sound can be overwhelming. Chorus frogs sound like crickets, but don’t be fooled, most crickets start calling in mid summer. Chorus frogs are difficult to locate, even if there are several hundred in a pond. I have spent hours trying to photograph chorus frogs only to see a few of them. Both chorus and wood frogs freeze solid over the winter at the water’s edge and begin their spring mating ritual as soon as they thaw out. 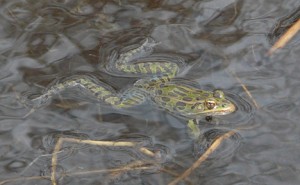 Leopard frogs migrate from deep lakes to ponds in mid April. During this time, they can be seen hopping across roads and lawns. The call of the leopard frog sounds like “snoring” coming from the pond. They begin breeding the third week in April.

One of my favorite sounds in nature is the trill of the American toad. It is hard to believe that a warty toad can make such a beautiful sound. The first toads are usually heard the last week of April. 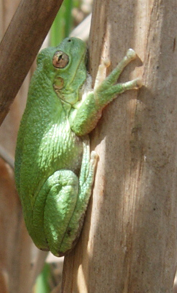 The gray tree frog comes to the ponds late, usually mid May. Tree frogs hide on cattails during the day and then crawl down into the pond and sing at night. 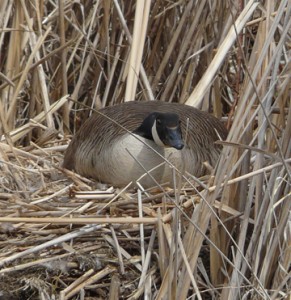 Canada geese mate for life and they set up their nesting territory after migration. Nesting begins in late March and the female remains on the nest for 28 days without food. She will lose 1/4 of her body weight during this time. The male remains nearby, watching for potential predators like a raccoon or fox. Geese nest on top of muskrat huts or hummocks that are above the water level of the pond. 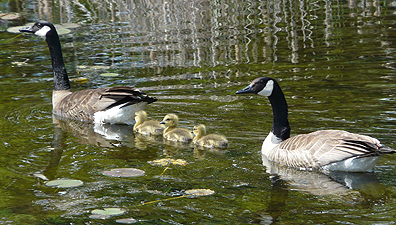 The goslings are born around the first of May. Soon after they are born, the goose family leaves the nest. A male can be told from a female by the thickness of the neck. The female has a thinner neck than the male. In the picture on the right, the female is in front and the male is in the back.

The northern oriole and rose-breasted grosbeak return to Minnesota the first week of May. May 1st has been called “Oriole Day” in Minnesota to recognize the event. 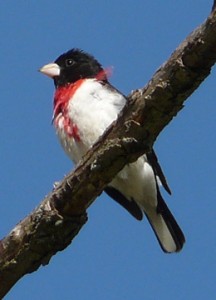 Since orioles eat fruit, many birders hang orange slices on their feeders to attract migrating orioles. Both birds have long distance migrations, since they spend the winter in Central and South America. 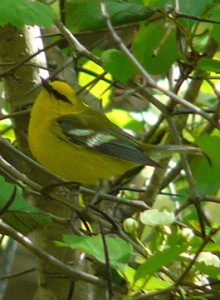 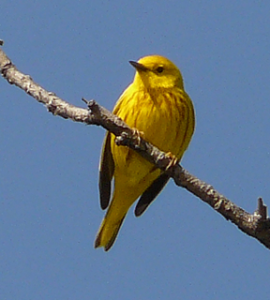 During the peak of the warbler migration (which may last only a day or two), a birder may see over a dozen species of warblers, flitting from one tree to the next. The most common warbler is the Yellow-rumped warbler. 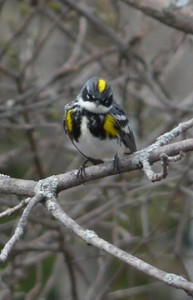 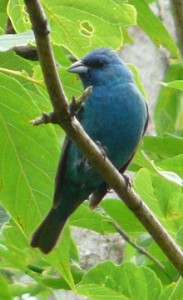 If you have never seen an indigo bunting, you are truly missing out. If the light is right, the shimmering blue color will amaze you. Indigo buntings return to upper Midwest in May. They are a small bird, but are very active and visible in the trees. Their call from the trees, sounds like, “See-see-here-here-peter-peter”. In the spring of 2012, I counted 6 pairs of indigo buntings calling in my woodland park. 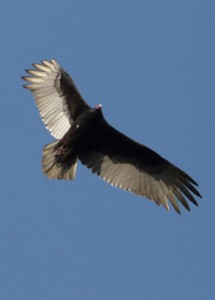 If you see a very large bird (up to 6 foot wing span) soaring in the sky, it is either an eagle or a turkey vulture. A turkey vulture constantly tips its wings in the wind, and the wings make a “V” if you seen the bird head on. Turkey vultures usually remain perched until the air is warm enough for the thermal winds to carry them upwards, high into the sky. Incredibly, a vulture may glide for entire afternoon without flapping its wings. 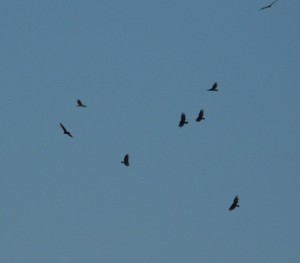 A “kettle” of migrating turkey vultures soaring on the warm thermal winds.

Vultures do not spend the summer in the Twin Cities area, but migrate through in early April. The highest yearly count of vultures at Hawk Ridge, in Duluth, was 2243 birds (2003). The vulture population, nation-wide has increased in recent years.Vultures nest on cliffs and ledges and make a simple nest in the dirt, laying 2-3 eggs.

This program is dedicated to Jim Gilbert, who has collected data on the “signs of spring” for over forty years. Jim’s work and his resources have been an inspiration and support to me.