Oceanography Lesson 4 – Rivers in the Sea

Oceanography 4 – Rivers in the Sea

From: Whales in the Classroom – Oceanography
By Lawrence Wade

The ocean currents of the world play a very important role in our ocean system. The currents move throughout the oceans like the blood that moves through a body. They are “rivers in the sea” and they circulate ocean water throughout the world. Although the oceans are surrounded by continents and have been given special names (Pacific Ocean, Atlantic Ocean, Indian Ocean, etc), the water is actually mixed by currents into one huge planetary ocean. In fact, if you could follow a drop of ocean water, you would find that it would travel from one end of the Earth to the other. 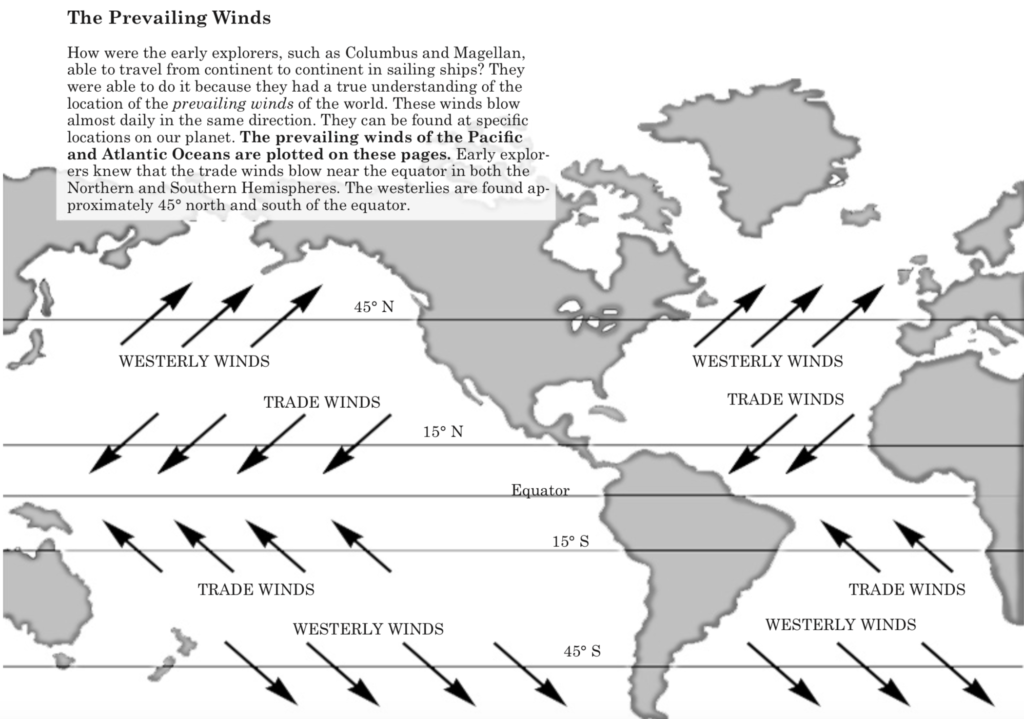 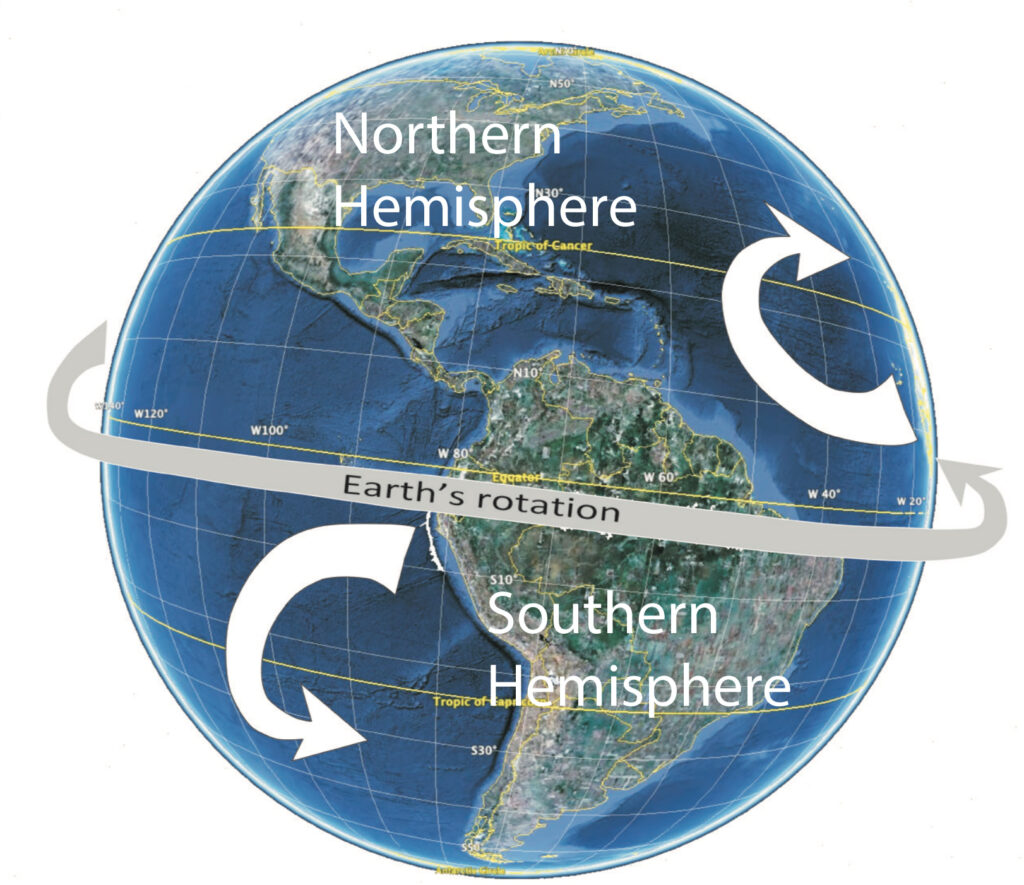 Use the key at the end of the post to determine how well you did on page 40. 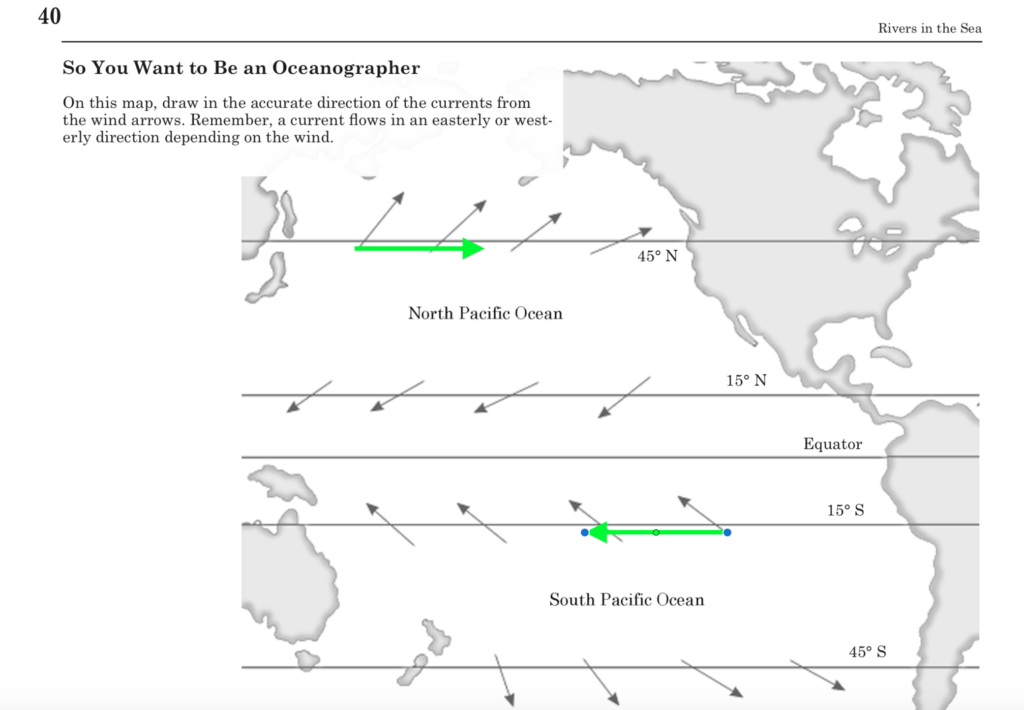 When a current comes in contact with a continent, the water builds up and must either flow north or south. The direction the water takes depends upon the Coriolis Effect. As you know, in the Northern Hemisphere the currents moves clockwise and in the Southern Hemisphere it move counterclockwise.

Download page 41. Now complete the flow of the North Atlantic current system by drawing an arrow to show the direction the current flows after it comes in contact with Europe and North America. 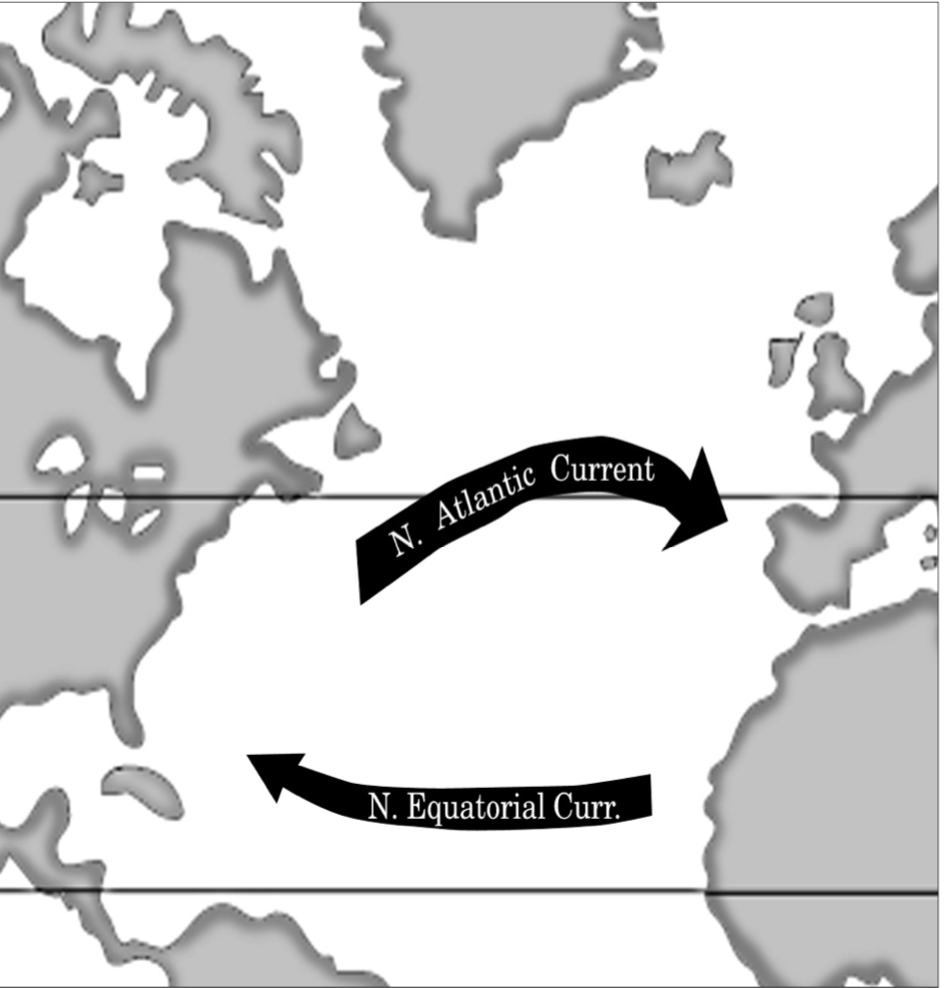 Use the key at the end of the post to determine how well you did on page 41.

Now are you ready for the “big challenge”? You will be plotting the ocean currents in the Northern and Southern Hemispheres of both the Atlantic and Pacific Oceans
Buenos suerte ( good luck)!

What to Do:
Download pages 42-43. Apply what you have learned in the previous exercises and complete diagram below. The South Equatorial current in the Southern Pacific Ocean is completed for you.

In addition to plotting the currents, label three “Current Superstars”. 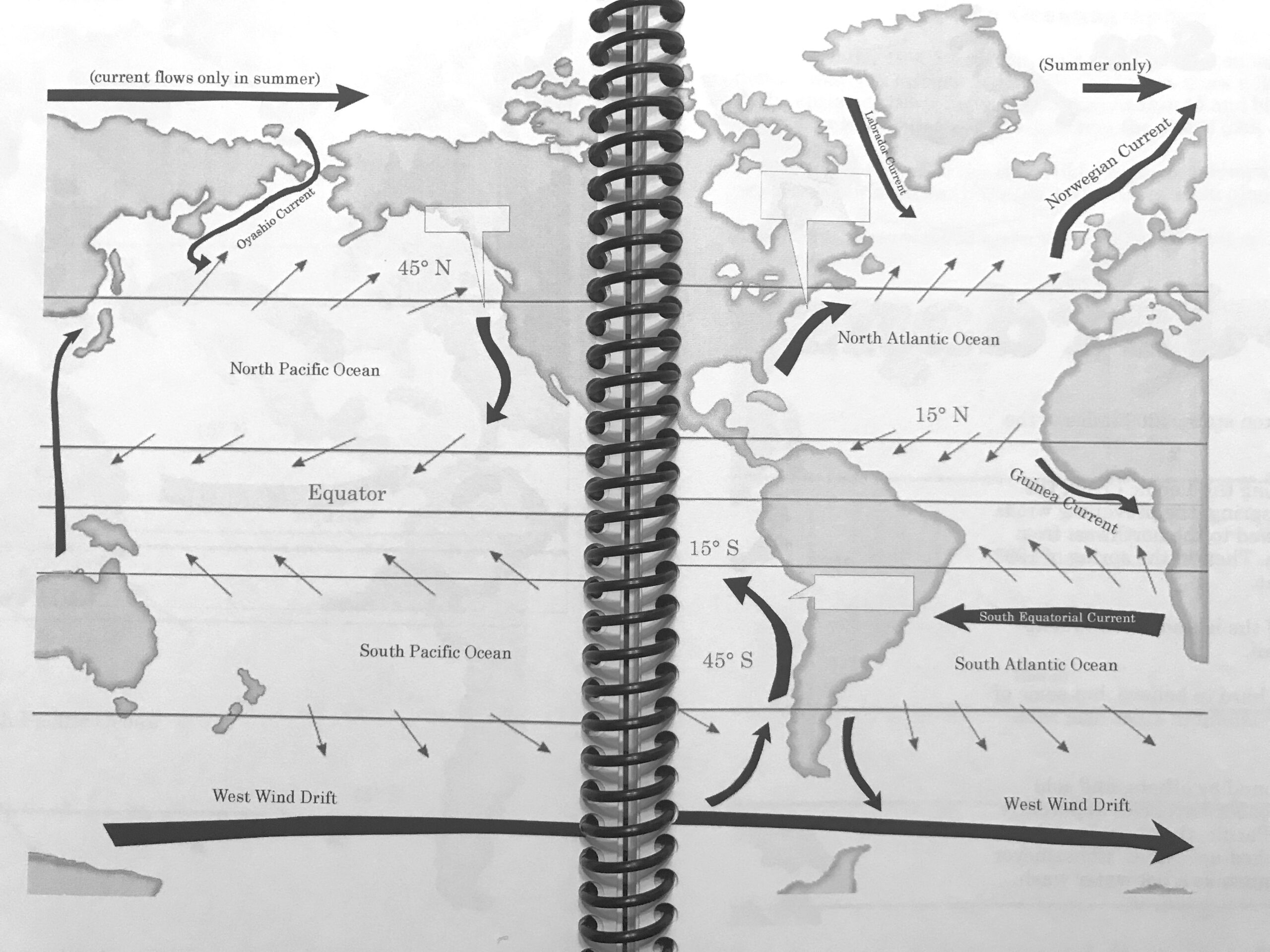 Use the key at the end of the post to determine how well you did on pages 42-43.

Keys to the exercises. 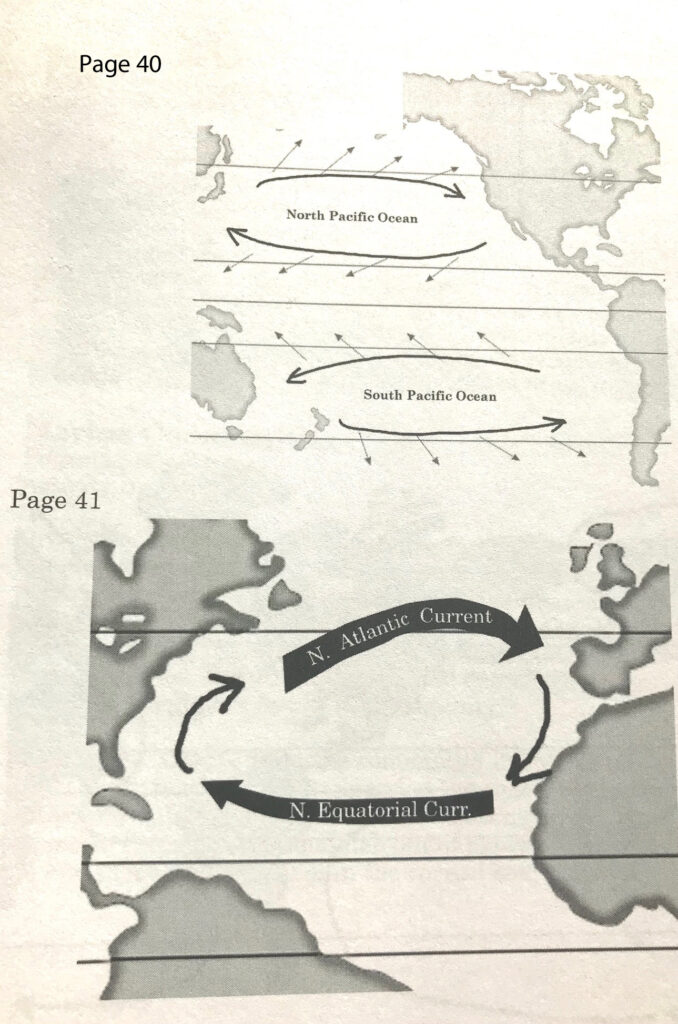 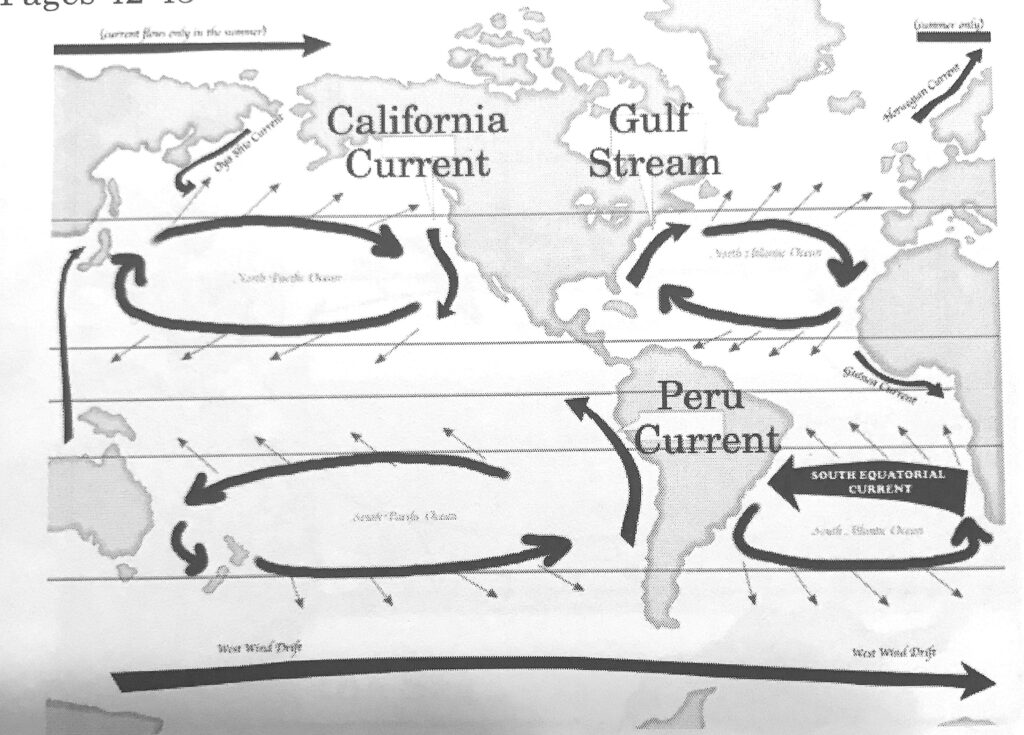