I am thrilled to share this posting that includes the voices of so many people who love nature. I hope you have time to enjoy the creative energy that they have expressed through their photography, stories, poetry and art.

Holly Einess is a naturalist and contributor to the Minnesota Landscape Arboretum Nature Notes. 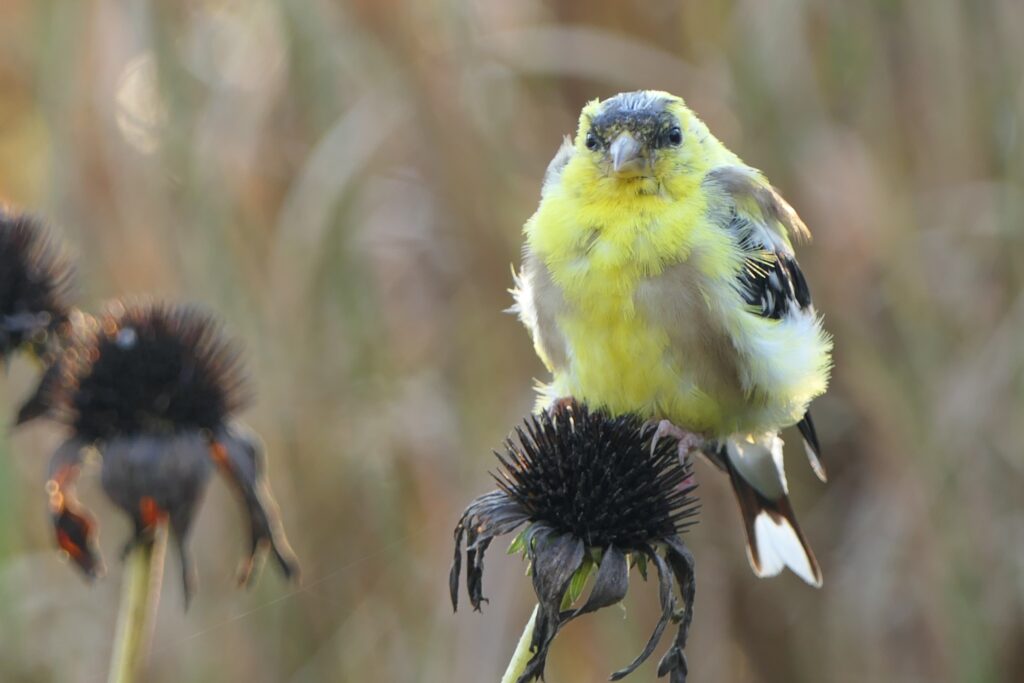 I took this photo of a goldfinch in September as he was feasting on coneflower seeds. I love how fluffy and bedraggled he looks as he’s transitioning from his bright breeding plumage to his more drab winter colors. What is it about birds that I find so charming? That makes me want to know them? I took up birding several years ago with a local Audubon chapter, and while I now can identify more than the usual suspects (robins, cardinals, crows, and chickadees), I feel as though my appetite for avian knowledge will never be sated. What a challenging endeavor it is, to become an expert birder! Not only do the males often differ in appearance from the females, the juveniles can have their own look distinct from the adults. And then there’s breeding vs. non-breeding plumage, migratory vs. non-migratory… A naturalist I know once said, it’s not so important that I  hang a name on every bird I see. It’s about being out in nature, or even my own backyard, noticing the life around me and getting curious about it. Expert or no, sharing habitat with these feathered miracles brings me untold joy, and for that I’m very grateful.

Dale Antonson is a frequent contributor to Old Naturalist.

Back to the Garden
A global pandemic and climate change. Difficult headlines to avoid. To relieve ‘cabin-fever’, people are returning to the outdoors. 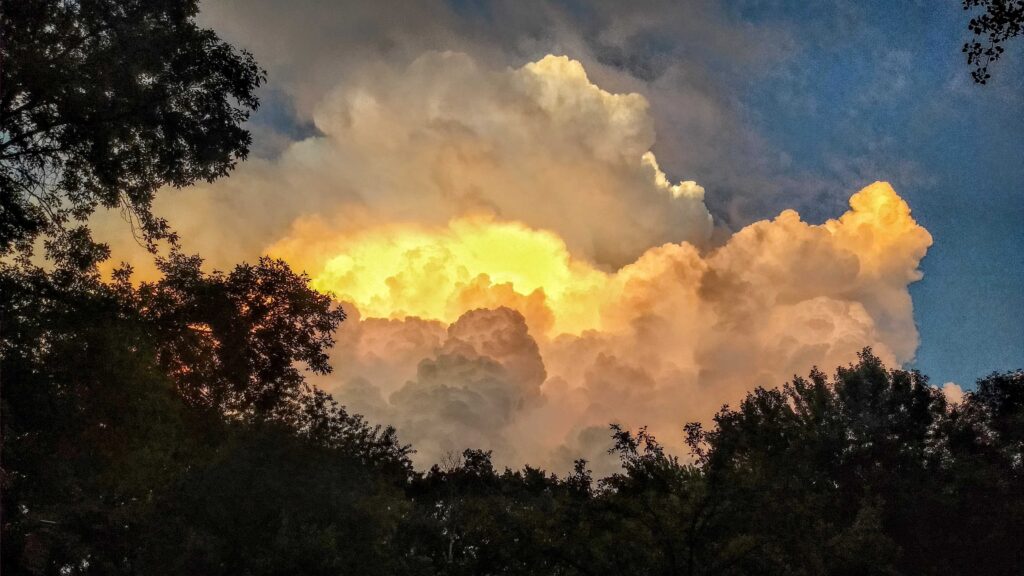 Clouds above my house.
Photo by Dale Antonson

There are many more people out walking, biking and paddling these days. When I was recently hiking in a state park midweek, I saw many families hiking the trails through the forest. The Earth offers ever changing opportunities to notice what’s going on around us. 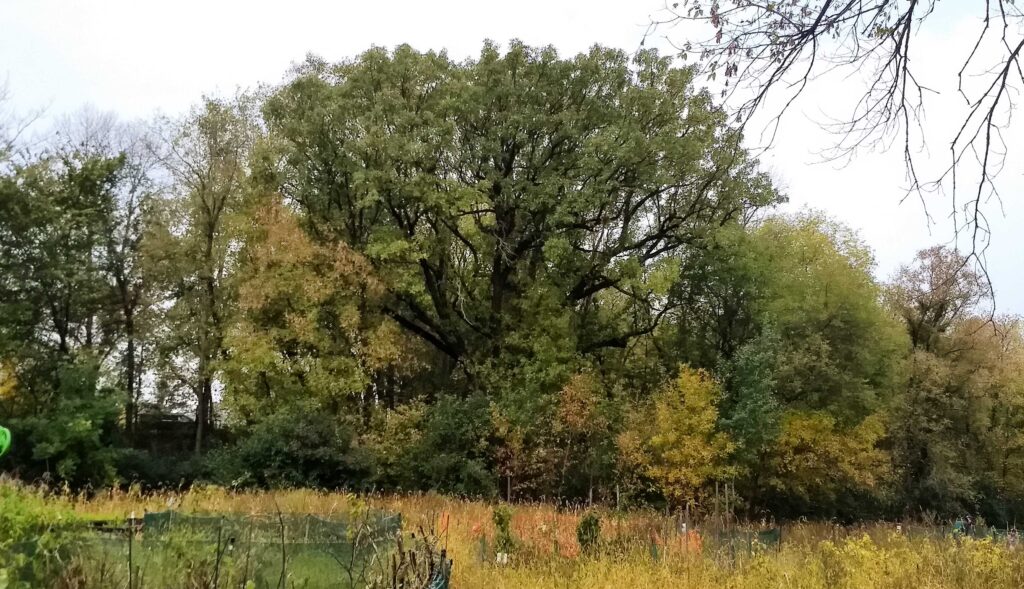 Observation of the world we’re part of can provide an endless commercial free show of wonder. Entertainment by nature. It is a hidden Blessing in these changing times. 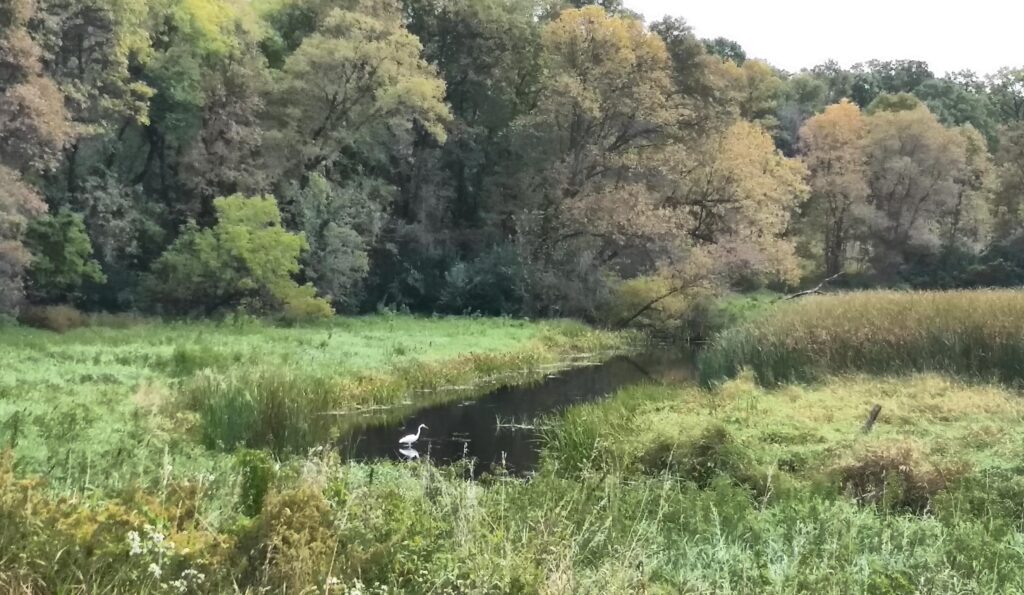 An egret in Purgatory Creek
Photo by Dale Antonson 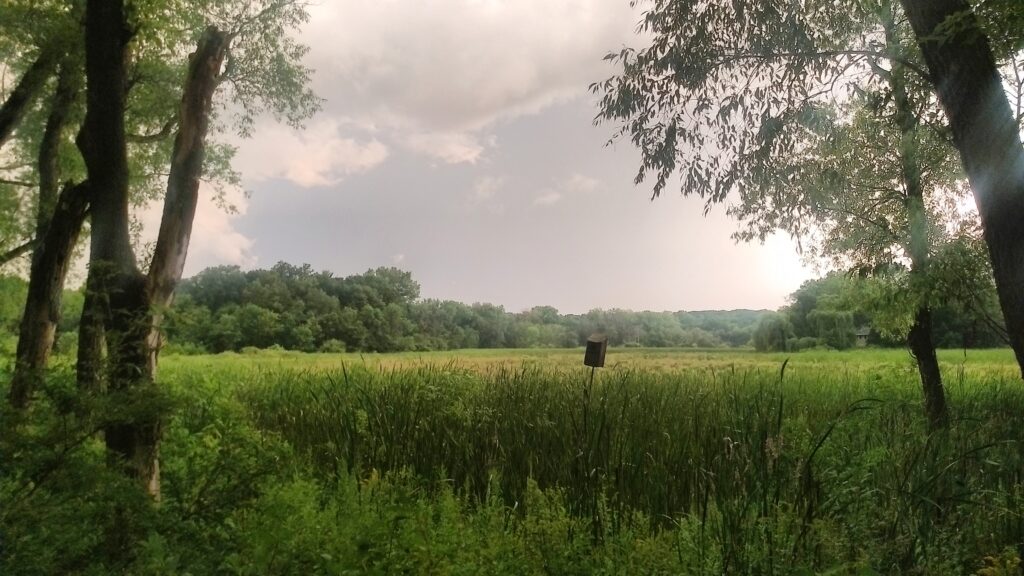 Across the street from my house.
Photo by Dale Antonson

This work was inspired by a late afternoon walk this summer at Staring Lake in Eden Prairie, MN. It was rainy all day, the clouds were finally breaking up and the sun came streaming in through the vegetation. The sun caused an ethereal, misty effect shining through the wet trees. It was a magical moment. 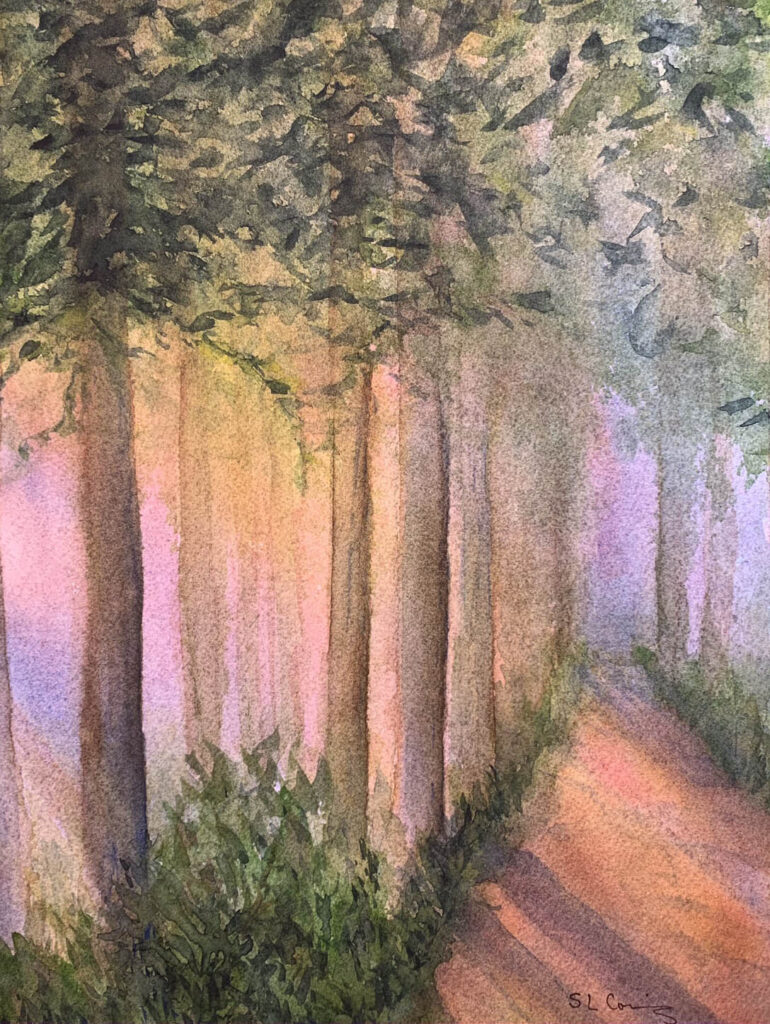 My third graders and I went on a noticing walk and happened upon a rabbit “murder” scene. It was incredibly interesting and I literally had to pull some of them away. There were bones sticking out and all of the organs and intestines had been removed and placed next to it. We made our predictions regarding what happened and then, real close to the scene we found this feather.

With the feather in hand, we made some guesses regarding which bird of prey could have done this to the rabbit. While looking through feather guides, the children debated between the feather belonging to a red-tailed hawk or a great horned owl, but could it possibly be a Cooper’s hawk? Barred owl and bald eagle came into the discussion as well, but were quickly removed from the list.

Our class reached out to the Minnesota Tracking Club with our two main predictions and heard back from them: “Sherlock and Watson were investigating a murder when Watson called out to Sherlock, ‘I found a knife! It must be the murder weapon.’ Sherlock in a calm voice replied, ‘My dear Watson, just because you found a knife in the kitchen, do not assume it is the murder weapon.” Are you sure the feather is associated with the crime scene?” I read the response to the students and one student jumped up, “We don’t know that the rabbit died from a bird of prey!” The search was on; what bird could have left a feather this large, and not be a bird of prey? After much discussion and a little bit of research, we solved the mystery. Have you? 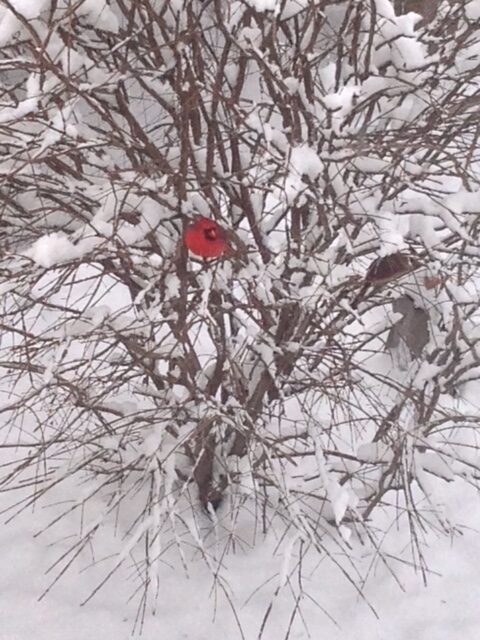 their artwork formed in time and wind

stretch their arms in praise.

And so we also stand as naked fragile souls

before our Maker , seeking His embrace.

Their art-formed trunks in shapes grotesque or elegant broken lines

groan with only a rusty, frozen leaf to blow

in brittle memory of a past life.

These spirited statues in motionless frost

And so I view in quiet awe their majesty

a lesson in frozen time.

they quietly teach the lessons of the universe.

Stripped of life, save a fragile leaf or two,

in bitter cold each branch moans and snaps

Helpless and trusting they stand waiting for nature’s next event

when bubbling life inside decorates with new spring greens

and clothes the forest once again.

And so I stand, as do we all, as God’s little works of art

Shaped by tragedy and time yet filled with life waiting to be reborn:

“clothed in the newness of life”.

Most of these photos were taken within a couple of blocks from our house. 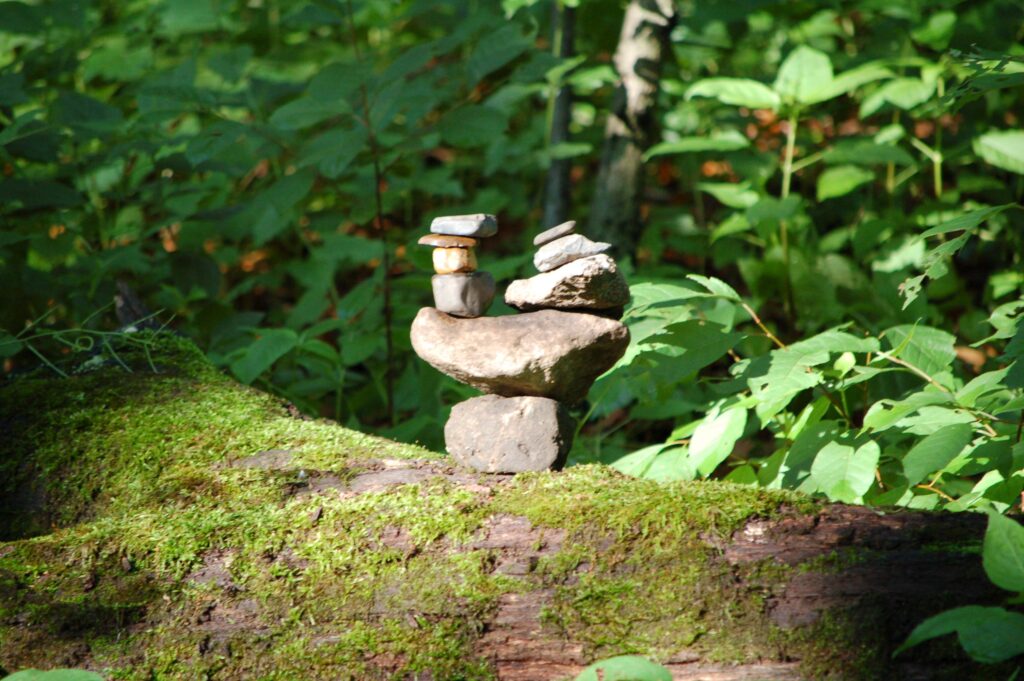 Being outdoors is one  of the only places I would rather be during this period of confinement. 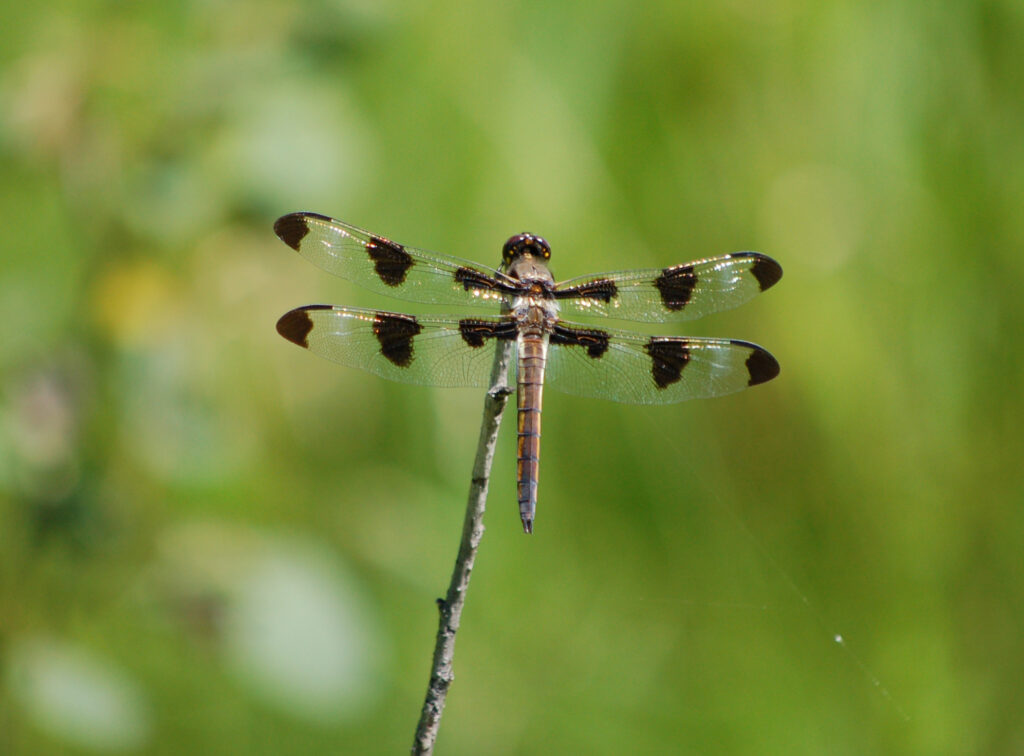 Nature is really all that counts after  waking up (not including family and friends).

Rather a tree than a human?
Not in all cases, but I think you know what I am saying. 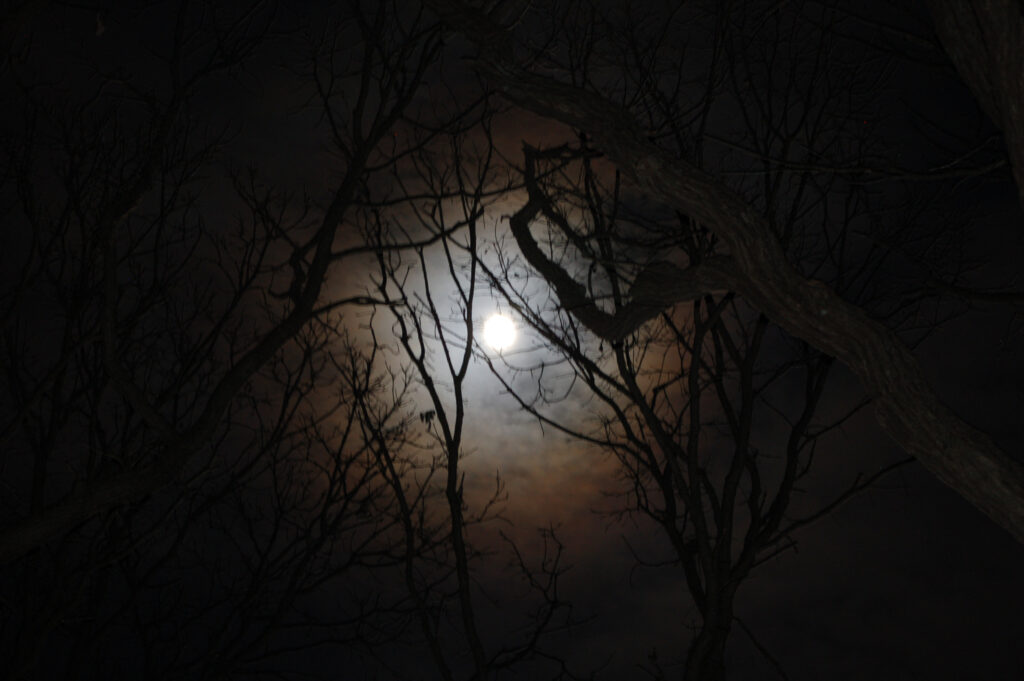 Alex Munoz is a frequent contributor to Old Naturalist.

These are Grizzly bear cubs, mother was killed in Montana, the cubs were donated to a sanctuary for wildlife, near flagstaff, AZ. Where they are being raised to date. 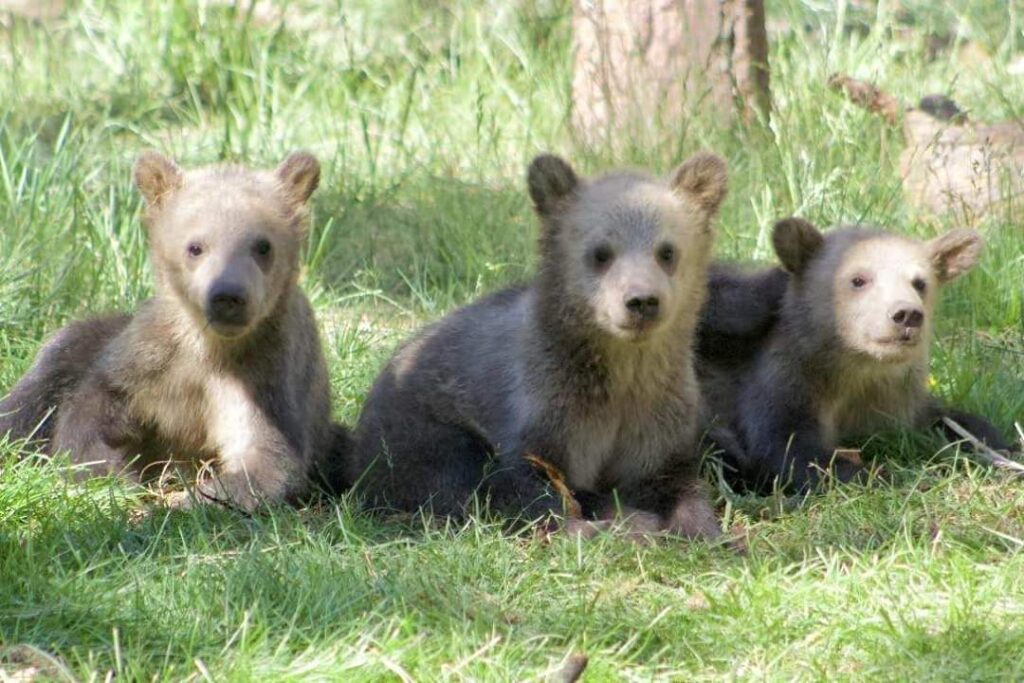 Animals
Carnivore, herbivore, omnivore
Some of them squeak – some of them roar!
When they get older they start to walk
Start to grunt and start to hunt.
Some animals are endangered species,
These kind of animals need more space.

This entry was posted in Connecting to Nature, Nature Poetry, Photography/Art. Bookmark the permalink.

2 Responses to Finding Balance in Nature