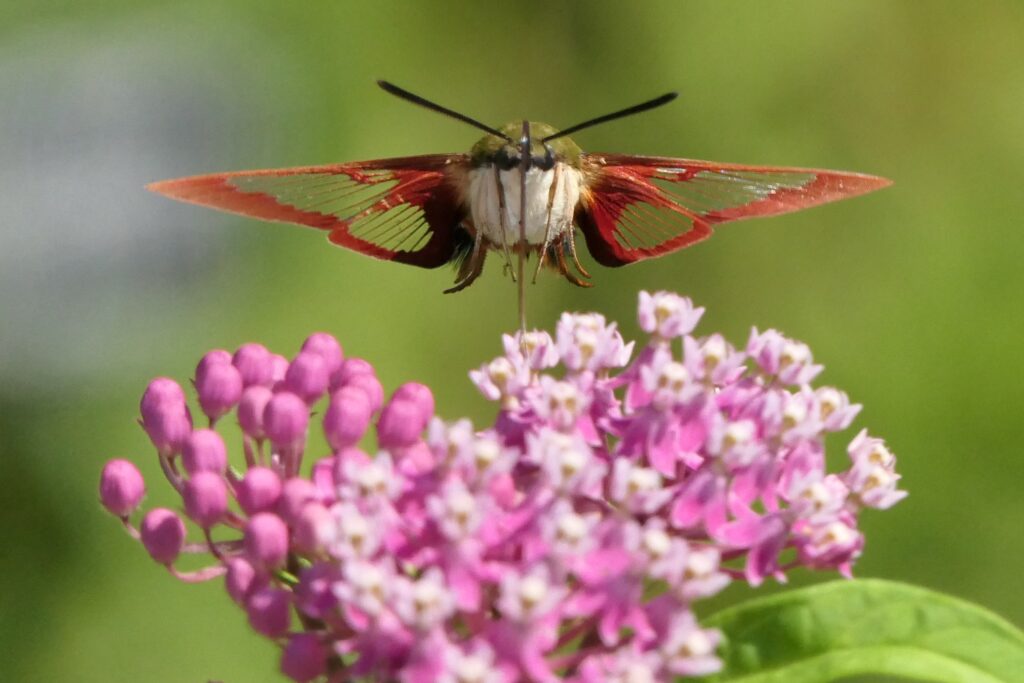 Sometimes I get to spend time with a creature that seems too cool to be real. While walking at the MN Landscape Arboretum last July I glimpsed a hovering something drinking nectar from swamp milkweed blooms. Was it a hummingbird? Some kind of large insect? When I tried to get a closer look it took off, and I was left feeling both disappointed and frustrated; I wanted to make the acquaintance of that mysterious, winged creature!

Lucky for me, later in my walk I spotted another, and this one was in no hurry to leave my company. Lots of photos and a little research later, I determined that my new friend was a hummingbird clearwing moth. How did such a marvelous bug come to be?! The see-through wings, the furry segmented body, the impressive antennae and improbably long proboscis? I’m just happy to know this little miracle exists, and hope to meet many more such wonders in future wanderings.
Holly Einess 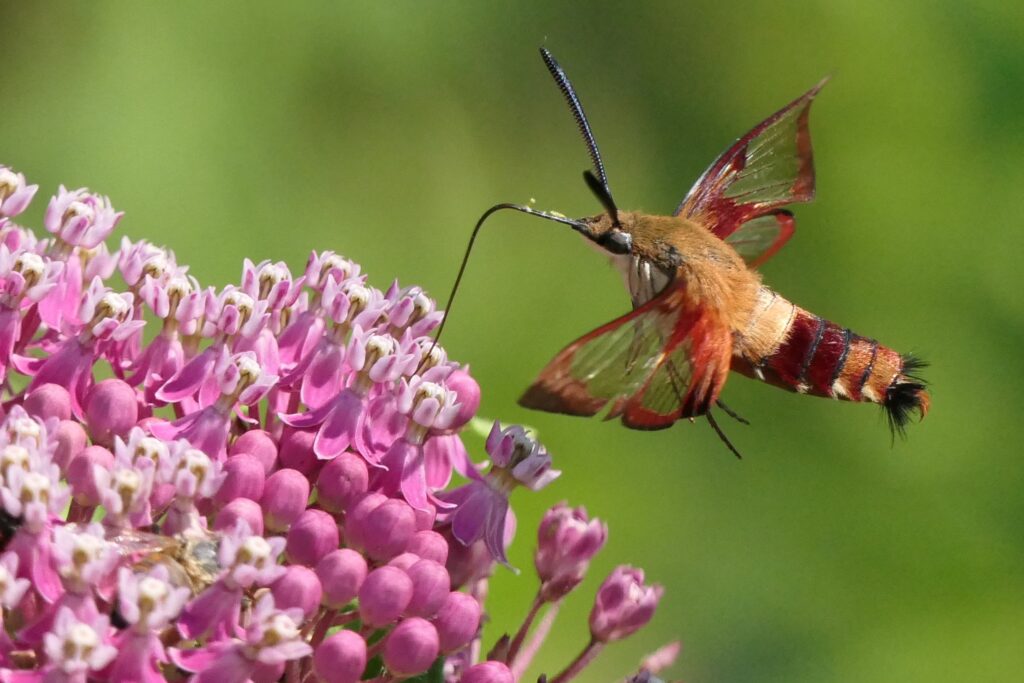 Last night a female cardinal left our bird feeder and flew into our patio door window. It fell to the snow and was barely moving. Remembering what you once taught my Kindergartners, I grabbed a bath towel, picked it up with the towel and brought it inside with me. I sat on the sofa, in front of the fireplace, with this precious one, wrapped up and on my chest. I stroked it’s small head with a finger and it’s eye opened and it looked at me. I whispered, “Don’t worry, I’ve got you.” I prayed that it would survive. It closed it’s eye and there was no more movement. What a blessing for me that I got to spend it’s last earthy moments with her!

It meant so much to me because I am a hospice volunteer and I’ve learned how important it is for people who are dying to not have to die alone. I wanted to do that for the beautiful cardinal. 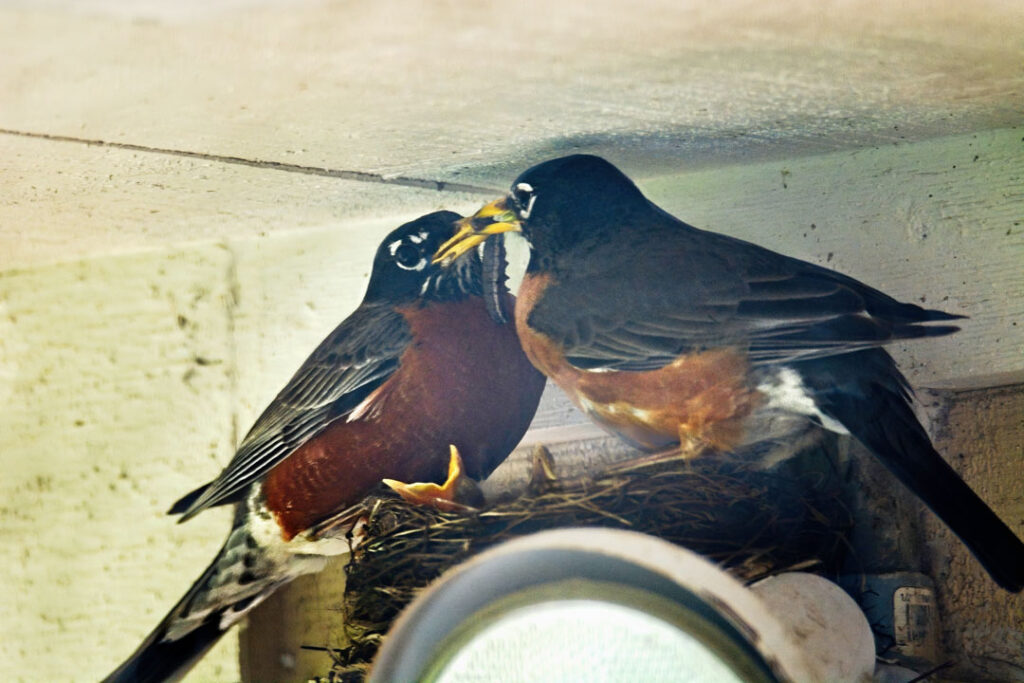 I didn’t know that male and female Robins are so maternal! These two have nested on a floodlight next to my home-office window for the last three years. Both apparently forage for nesting material and food, but while his partner is building the nest, he constantly brings her nesting material and earthworms or grubs. When laying starts the mother rarely leaves the nest and the father doubles his food-gathering efforts. After the bright-blue eggs hatch, both parents look after the nestlings. However, after they feather, the male increases time spent tending them, I expect so the female can re-build her strength for the next laying – at least two times over a Minnesota summer. What an inspirational partnership.
Ken Brown 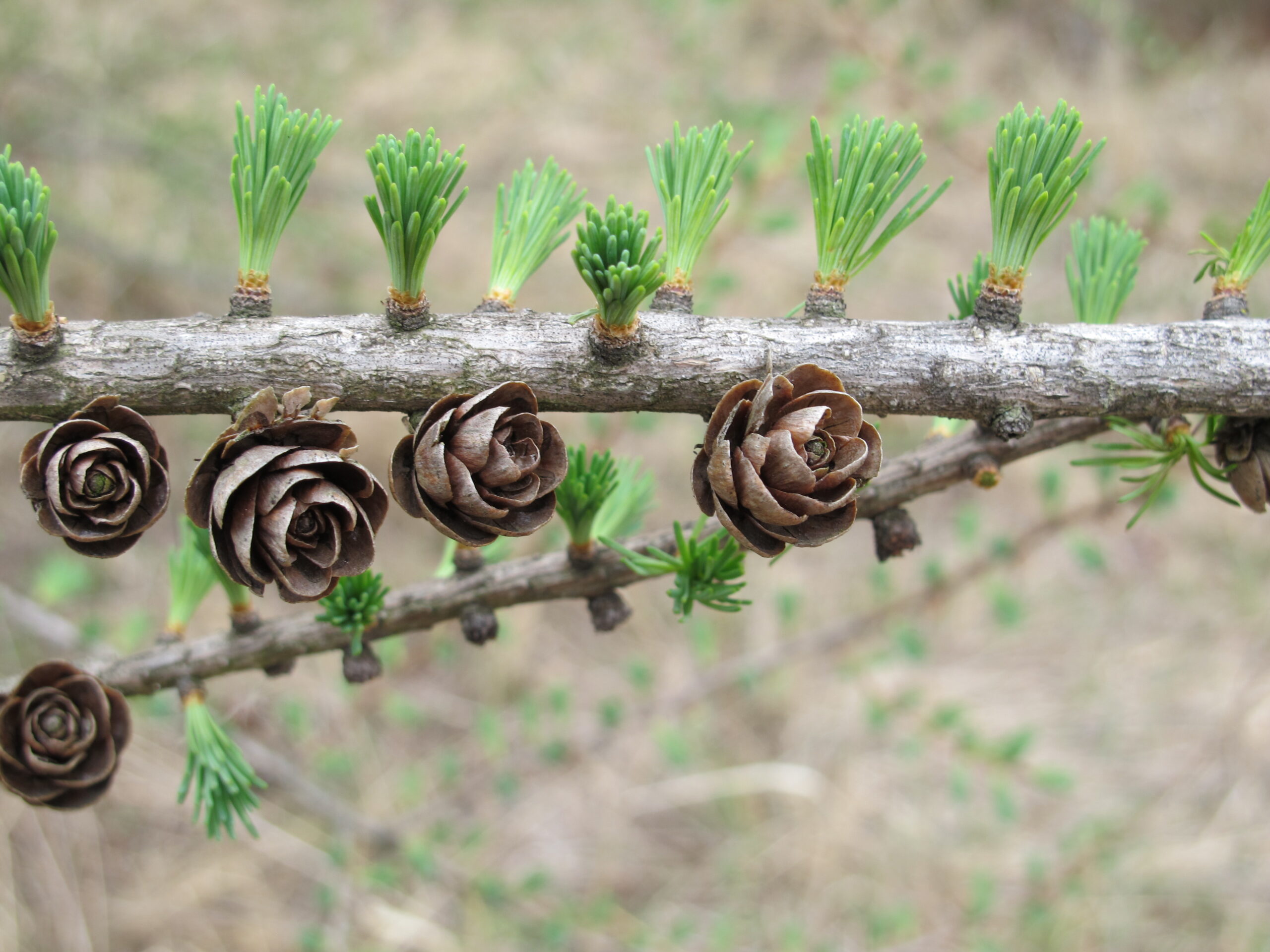 Moments are fleeting, and there are no exceptions to that in the natural world. ‘Bud break’ is a special time to glimpse the awakening of life in the plant world, but we have to take the time to stop and allow it to be discovered. Take a moment in time to pause and really look around you, and your spirit may be lifted.
Angie Adamek 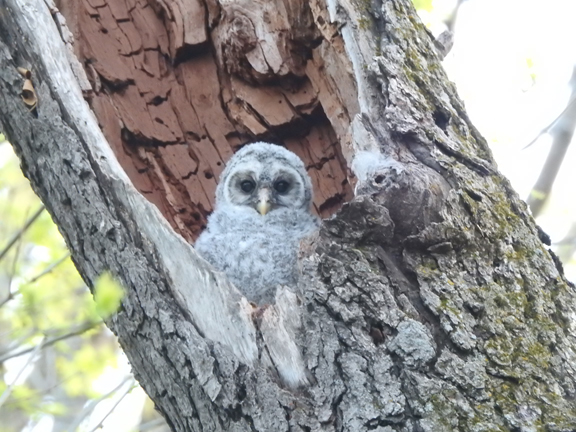 Hello little one
Stay safe in your cozy tree hollow
May you be taught well by your elders
And take your place as the tiger of the woods
You are a blessing to behold.

I have been teaching kindergarten and 1st grade students from Gatewood Elementary about animal tracks. Together we can not help but get excited at every little mark we see in the snow. The best part is when these tiny people learn a few tracks and passionately pass their skill onto everyone who will listen. They don’t care that Mom or Dad had a long day. It never occurs to them that the grown-ups already know what a rabbit track looks like. All they know is that they discovered something wonderful and they need to share it with the rest of the world. Get out there and pass a little something on to the next generation, the future keepers of the wild things. You won’t regret the time spent. 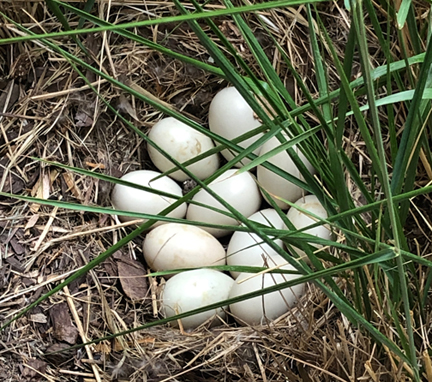 One morning as I walked out to get our paper, a movement startled me along the front of our house. It was a female duck and she flew off.   Within a week we had spotted her a couple more times. I realized that she had found a spot right behind one of the tall Karl Forester grasses. The date was June 10th.   Each day I spotted an egg but then she would leave and I thought she might not come back. She did return. On June 18th, I made sure not to scare her but I did get close enough to see that she had 10 eggs in the nest.   I wanted to know what to expect and found a web site that discussed the life cycle of a mallard. https://www.allaboutbirds.org/guide/Mallard/lifehistory

One of the things I learned was that after all the eggs are laid, the mother duck sits on the eggs continuously. The gestation period is approximately 28 days. I wanted to help her be successful in this most important job. Since she would sit on the nest all day I put out a shallow container of water and another of cracked corn.   Each day I would replenish the water and add corn as needed. She seemed to know I was not going to harm her. I also talked to her softly and gave her daily encouragement. I kept track of the days on the calendar so I would know when the eggs would hatch. The weather turned extremely hot in mid June and one day I noticed it looked like she was panting. The website mentioned that extreme heat is dangerous to the eggs and the mother duck.  The location she had chosen was in direct sun so I decided that I would set up some sort of shield to give her some relief. After trying various things, I set up a portable table over the top, a cardboard cutting board in front and some large beach towels draped over the top. I also plugged in a small fan, which allowed her to have some circulating air. Needless to say, this was not attractive and caused some neighbors to comment.   When they heard about the mama duck and her little family, they were very supportive and would inquire about her well being. I noticed that she would leave every evening between 5-7 p.m. 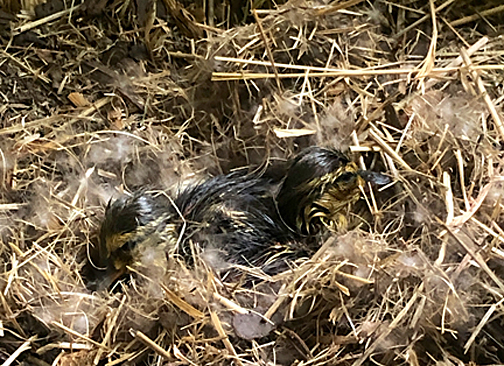 Around 5:30 on July 8th I went out to replenish water and food. Mama was gone but as I got near, I noticed that something was moving in the nest. I realized it was 2 baby ducks and they had hatched out!   I was so excited!   The next morning I had an eye Dr. appointment at 7:30 a.m. As I sat in the waiting room my husband sent me a text with a picture of mama duck and her 10 little babies heading for the small lake a block away. He said the smallest chick had a difficult time keeping up with all the others and mama was loudly quacking to keep them all in line. I was so disappointed that I missed her departure but I was happy to know that they all hatched.   The next morning as I joined my neighborhood friends for our daily walk, we passed by the small nearby lake. We stopped and scanned the water. Towards the middle amongst the lily pads we saw a group of 10 tiny ducks with a mama duck.   I don’t know if I helped her that summer… but she sure helped me.   There is a quote I found that speaks to me:

“ When I finally got my ducks in a row, I realized that they aren’t even my ducks!” 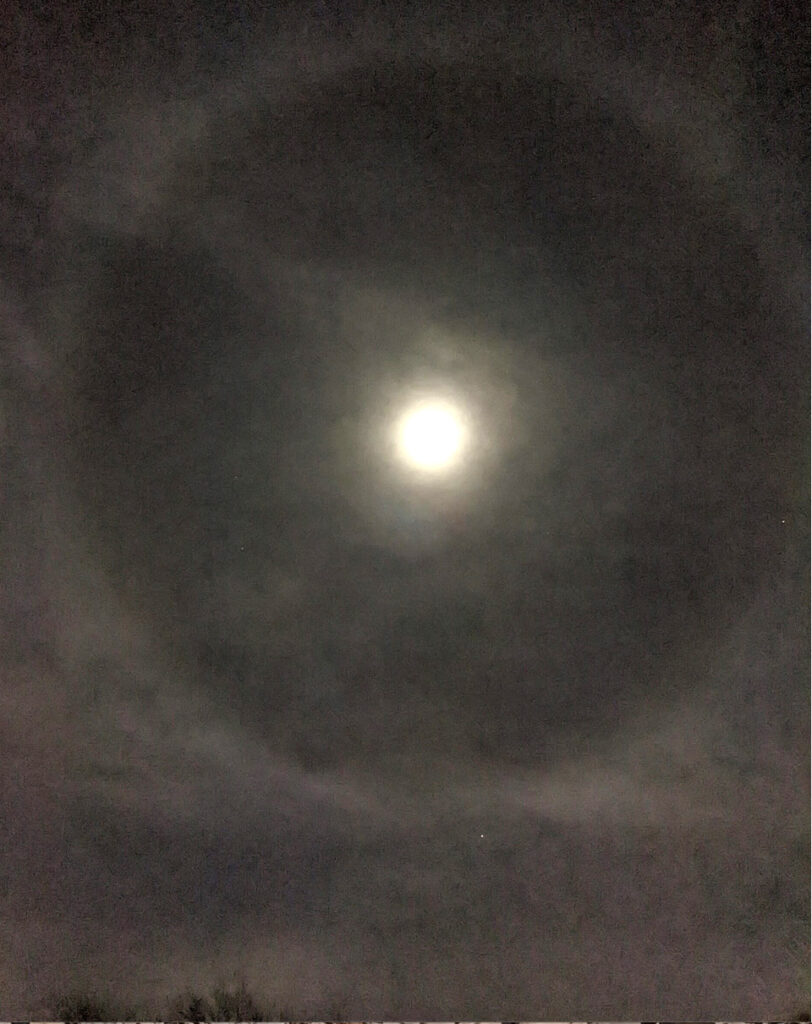 Doing for others  –  Dewey Hassig

“What you do for yourself dies with you; what you do for others lives forever”. Sharing garden produce with the Orchard Park Childcare kids.
Dewey Hassig 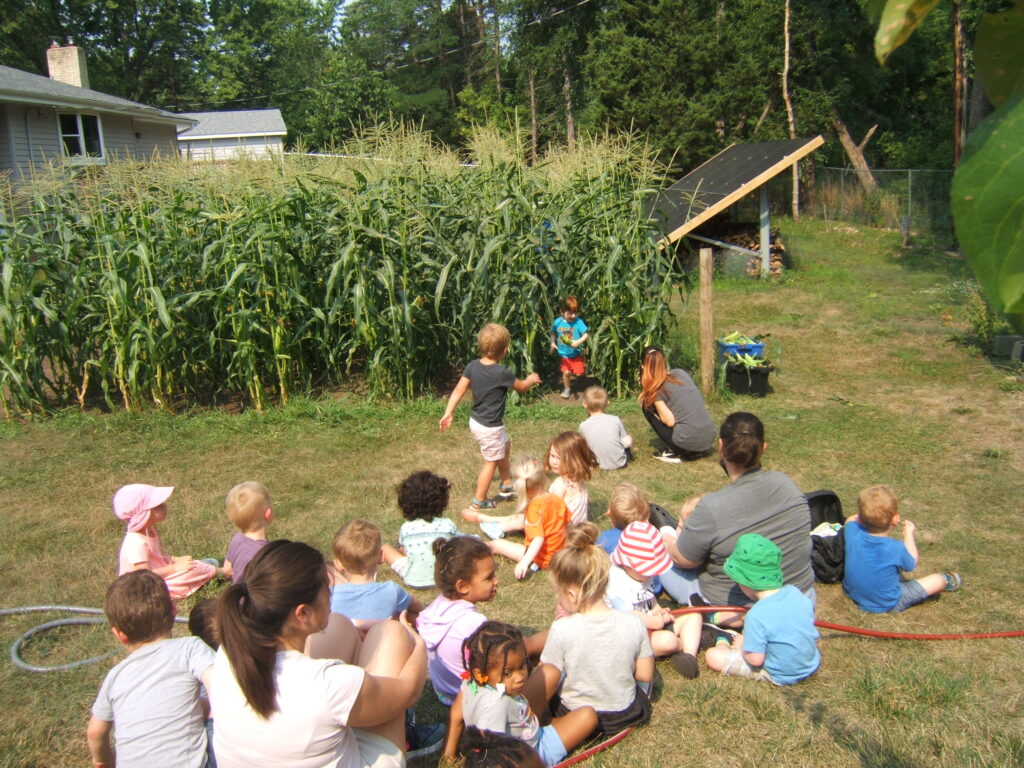 My alarm clock is a pileated woodpecker. Every day between 7:30-8am, I hear its call and know it is time to get up and start my day.
Lawrence Wade

4 Responses to Discover Something Wonderful