Our Trip to Bert’s Cabin by Curran Ikhaml 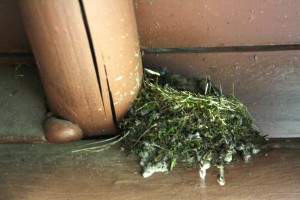 “My family went to Bert Cabin’s at Itasca State Park.  We saw a phoebe nest in the part that holds the cabin together.  One time we saw the phoebe with a moth in its beak for the babies in the nest.  The babies were part furry part feathery.  We heard the babies cry, they always got louder when they saw their parents with food.

One of the phoebe parents.

The two phoebe parents were very busy feeding the two hungry babies.  The parents liked to swoop their tails in circles on our stuff, like our camping chair or the picnic table that was at Itasca.”

This entry was posted in Birds, Nature Notes, Summer. Bookmark the permalink.