How a small group of people stood tall for the lowly honey bee.

“Birds and nature, in general, provide me with such spiritual joy and a sense of connection that it was only natural to feel the urgency of this latest environmental issue. It is a problem we humans created; it is a problem that we can and are obligated to fix”. – Judy Chucker 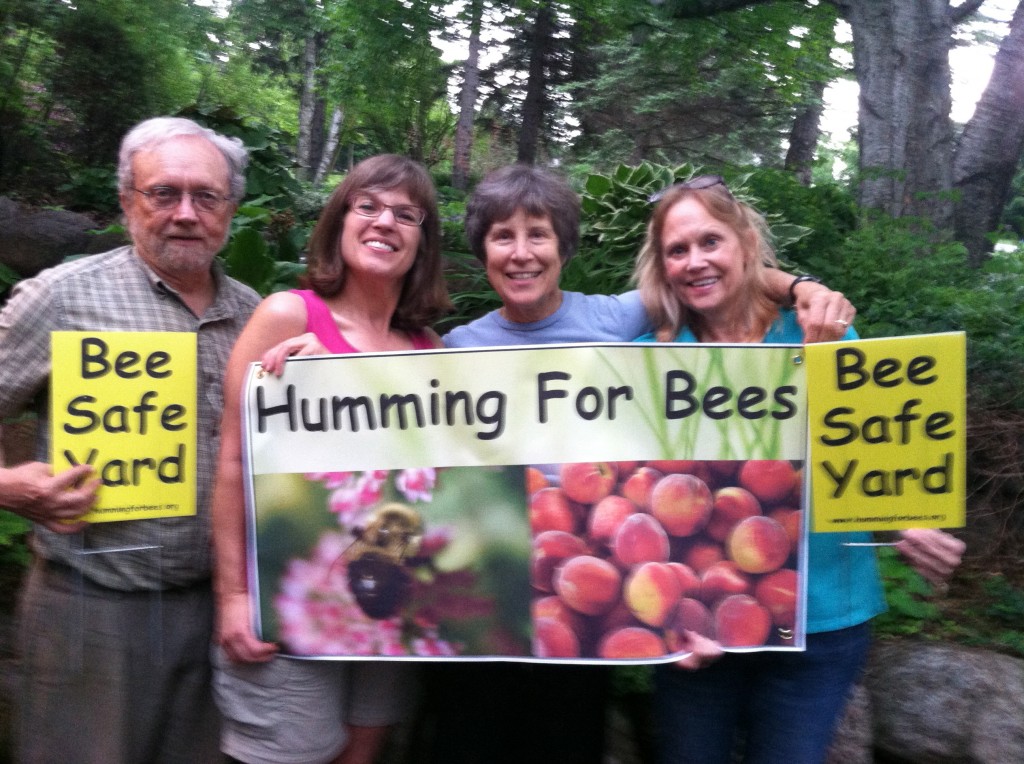 “Working to help bees keeps me sane in an insane world.  It keeps me connected to others who care.  It saves me from isolation and despair.  It challenges me to grow and step out of my comfort zone.  It gives me hope.  And at this time in history I feel it is my moral duty to be hopeful and act on that hope.  I can’t do everything at once, but I can do “something” at once—my “something” is working with others who care, to help bees.  My heart is full and I am hopeful.”  ~Patricia Hauser

At the end of December 2013, a group of us who were concerned about the disturbing reports we had heard about honey bee die-offs began meeting. Our group formally became known as Humming for Bees and we met at local libraries. This is our story.

We decided our focus would be to educate ourselves and others, bring change to one small city, and then expand to other cities. Since Patricia Houser and Jeff Dinsmore lived in Shorewood, MN, the group decided to target the town and try to pass an ordinance, banning the use of neonics. They went to countless meetings with city council members, the mayor, networking with people who were interested in helping. Patricia, Barbara Goodman-Fischtrom, Judy Chucker, Lu Harland, and Melissa Hochstetler spent countless hours “tabling” at special events and educating people about the problem. Jeff Dinsmore and others spent hours making “Bee Safe Yard” signs. The yellow signs have popped up in a number neighborhoods.

All of this work, has made a difference. Last month, on July 28, 2014, the Shorewood City Hall passed, “A Resolution Endorsing ‘bee-Safe’ Policies and Procedures”.

Below is an excerpt of an article that appeared in the Star Tribune:

In the growing movement to better protect honey bees, Shorewood has become the first city in Minnesota — and, leaders say, the third city in the nation — to pass a policy encouraging the planting of bee-friendly flowers and restricting certain pesticides. 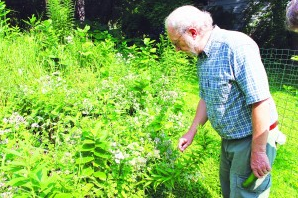 Jeff Dinsmore tends some of his “bee friendly” plants
http://sailor.mnsun.com/2014/08/08/shorewood-becomes-a-bee-friendly-city/

Becoming a beekeeper, I realized more and more, the huge importance of bees and pollinators in our environment and food production. With the current, and dominant methods for pesticide use in agriculture and even less controlled use in our urban/suburban environments, there must be a shift in practices to ensure our health and the vibrancy of our environment.
Jeff Dinsmore

With all of the research we were doing on honey bees and pesticides, Jeff Dinsmore took on the task of creating a website that was a resource for like-minded people. The website includes “bee-safe” nurseries, good plants for pollinators, the latest information on pesticides and honey bees. (Go to: www.hummingforbees.org/). Probably the best resource we found was the TED talk by Marla Spivak, from the U of MN Bee Lab (go to: www.ted.com/talks/marla_spivak_why_bees_are_disappearing). 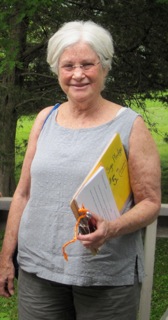 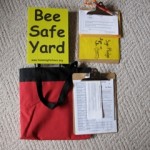 “There is so much abuse going on environmentally and I’d ask myself, “Where do I begin? What can I do ? How can I make a difference??? The bees made it possible for me to simplify and focus on an issue of great importance, so I got involved”…Barbara Goodman Fischtrom

In the process of educating ourselves, we became aware of problems around systemic pesticides. Below are excerpts from an article that appeared in the League of Women Voters MN Newsletter by our leader, Patricia Houser:
(http://www.lwvsouthtonka.org/uploads/8/4/7/2/8472689/ask_b4_u_buy.pdf)

…In the early 90’s a new family of insecticides, neonicotinoids, was registered with the EPA. Many people are now referring to them as “neonics.”

“Neonics” have become both ubiquitous and implicated as one of the key factors of CCD or Colony Collapse Disorder of honey bees world wide. They’ve also been linked to harming native bees, other beneficial insects and pollinators. In addition, there is growing concern for birds and aquatic life in relation to this family of insecticides.”

One thing we learned is that most agricultural seeds, including corn, soybeans, and sunflowers are treated with neonics. Alternately, most bedding plants and perennials supplied from commercial nurseries are sprayed with neonics to survive shipment and assure good presentation at retailers. Neonics are a systemic pesticide. As the plant grows, its roots, stems, leaves, and flowers hold the insecticide and the plant remains toxic (for a long period of time) to any insect that uses the plant, pollinators included. So if you want to purchase a plant that pollinators would visit, there is a good chance that the plant was treated with a neonic. “Humming for Bees” decided to query retailers and nurseries, and express the need to purchase neonic-free plants. 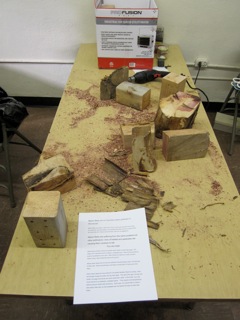 Patricia’s article continues:
There are nurseries and garden centers that have either been pesticide free from the beginning or are now talking with their growers and suppliers about the history of the plants they are buying. This is not easy and in some cases impossible. It’s hardest to determine the history of bulbs and cutting-grown plants because they come from all over the world and often have gone through multiple distributors before arriving in the U.S.

Some venders are refusing to buy plants (annuals and perennials) that have been treated with neonics. Some are planting their own organic seeds and refusing to use any neonics on them during the growing process. Many are still accepting and selling plants that have been treated with neonics and in some cases are still using neonics on their own plants. This is why you should “Ask B4 U buy”. Most nurseries are concerned about this serious issue.

Once I saw the seriousness of the situation it was obvious that something needed to be done and so Humming for Bees will be on my agenda for a while now. It’s been inspiring to see what can be done by ordinary citizens. Lucia Harland 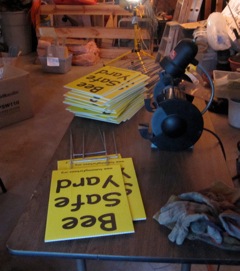 Unfortunately, the “neonic” problem does not appear to have a fairytale ending. Monsanto and Bayer Corporation are probably readying for the roll-out of the next generation of pesticide. Judy Chucker, another “buzzer”, researched the “neonic” problem in relation to birds and other living things. Below is some of her material that appeared in a local Audubon publication  (http://audubonchapterofminneapolis.org/wpaudubon/wp-content/uploads/2009/08/MayJune2014.pdf:)

“The neonic problem is much bigger than the plight of the honey bee–a complex issue not limited to pesticides–upon which a third of our food depends. Historically, birds have not faired well with pesticides. This new class of pesticides is no different. Had any bird the size of a blue jay, grabbed just one neonic-coated kernel of corn, or scratched the dirt to uncover a kernel, that would have been its last supper. While smaller seeds such as wheat treated with the neonicotinoid, Imidacloprid , may also kill a bird. In addition,  it takes only 1/10th of a corn kernel to interfere with reproduction during the egg-laying season by any of the neonicotinoids. 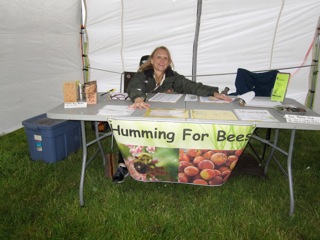 Lu Harland holding down papers- During Art on the Lake tabling

The risks posed to birds by neonicotinoids are not confined to consumption of coated seeds or the parts of the plant that grow from those seeds. Due to neonicotinoid persistence and mobility, the risks extend to aquatic and terrestrial invertebrates, and other wildlife: Neonicotinoids are killing the invertebrates upon which birds depend. Already, scientists such as University of Saskatchewan’s Assistant Professor Christy Morrissey, are discovering surface and

One of the tents collapsed due to wind at the Art on the Lake event.

groundwater contamination worldwide at levels that exceed those necessary to kill many aquatic invertebrates. With a report due in 2016, Morrissey’s work, suggests that prairie wetlands surrounded by croplands such as corn and soybeans have higher concentrations of neonicotinoids. Mineau has suggested elsewhere that grassland birds are in decline more from pesticide use than from habitat loss.

For those of us who feed birds, an investigation into birdseed is still underway. My calls to a popular bird feed store (with 300 stores nationwide) alerted a concerned manager to the potential problem. Over several weeks she attempted to find the answer to this question, but in the end could only offer her confidence in the individual responsible for the company’s seed quality.” 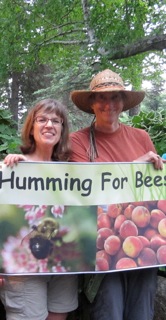 For me, it wasn’t so much about “saving the bees”, as it was about changing our attitudes towards how we treat the Earth. I was continually inspired by the commitment of our bee group and thankful to be around people who worked so hard to make a difference.
Lawrence Wade

This entry was posted in Birds, Insects, Nature Guardians. Bookmark the permalink.

3 Responses to Buzzing for Change