A Naturalist’s Shame – Lessons from Nature 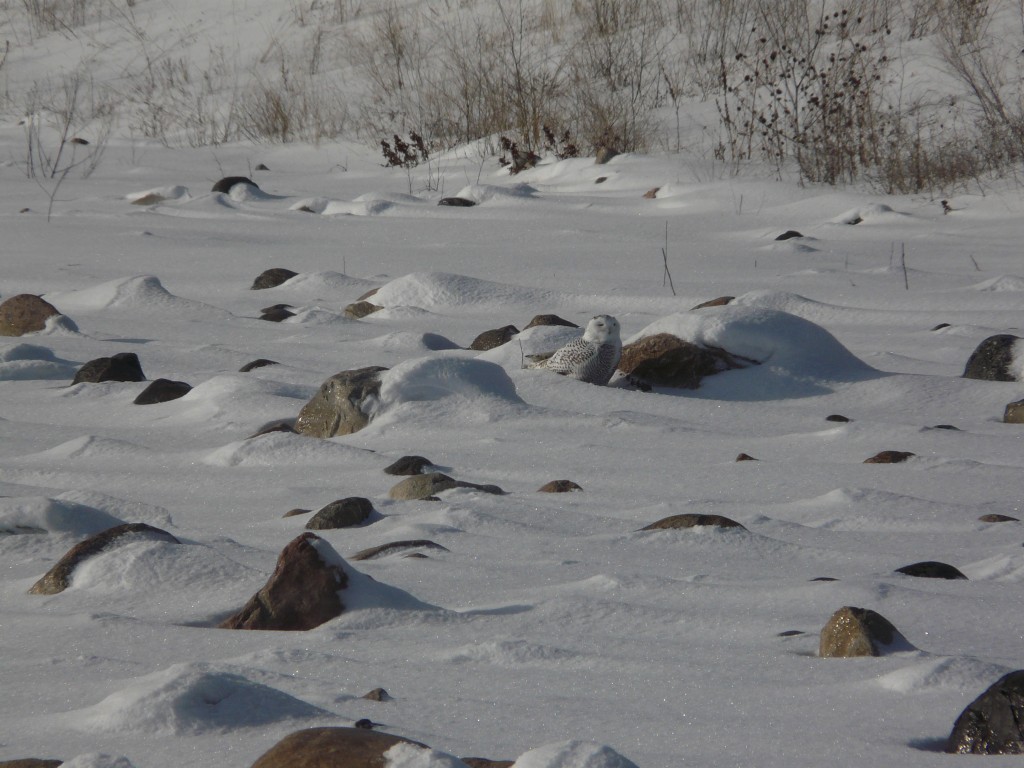 Snowy Owl in the distance

The first event occurred in early January. Someone told me that a snowy owl had been seen near the Arbor Lakes Shopping center about 20 minutes from my house. I went online and got complete directions where the bird might be seen. I had not seen a snowy owl since 1975. They are rare Arctic owls that periodically migrate south into the United States. Last year, I spent two days in Duluth searching for snowy owls and never even got a sniff of one. So you can imagine that I was very excited about the opportunity to see a snowy so close to home.

It was about 0°F when I drove up there and the directions lead me to the edge of a construction site. It was weird getting directions to find a snowy owl and then driving up there, and actually seeing it. When I finally found the owl, it was like seeing a vision from another dimension.

The bird was perched at the edge of frozen lake, protected from the bitter wind. I wasn’t sure what its fright distance was, but I thought I remembered that I could approach the species pretty closely. I marched through the snowdrifts and at about 75 yards, I noticed the bird started to get agitated. Two more steps and the owl took off, moving further away from me. At that point I knew that I was not going to get close to the bird and should have packed up and headed back to the car. But I didn’t do that. I “needed” to get a photo of it. 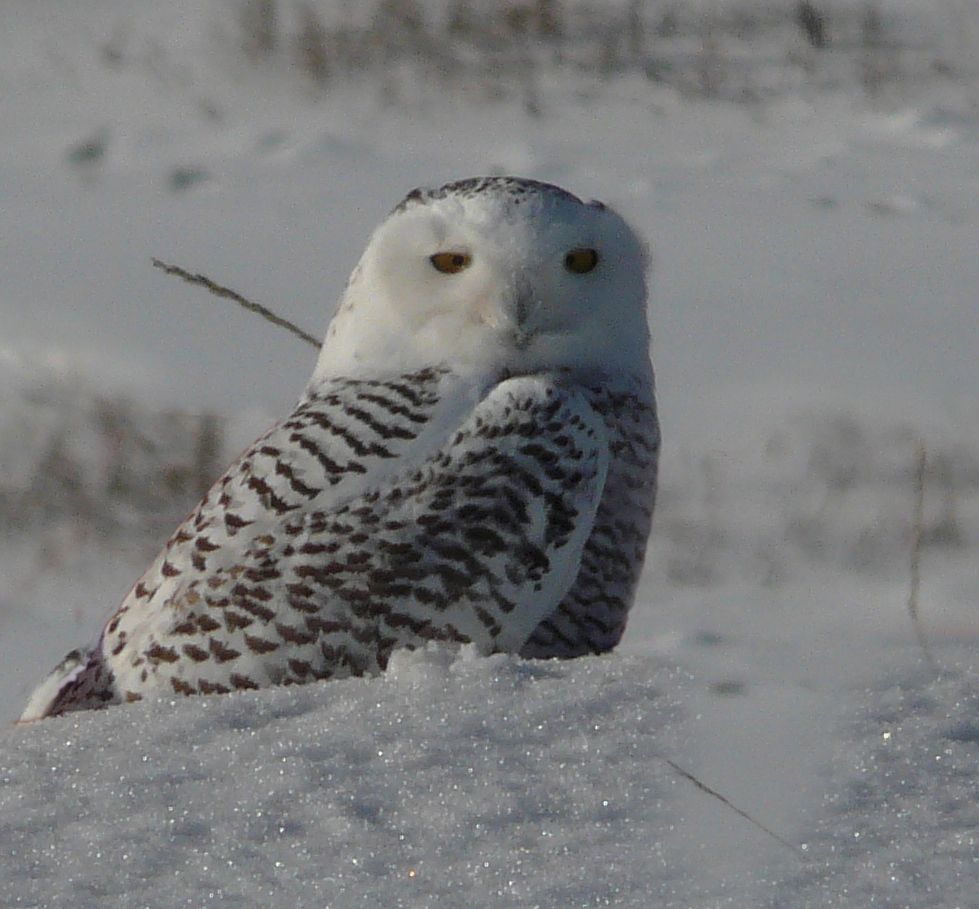 I slogged back up on to the top of the ridge, so the owl would not see me, but I scared it again and this time it flew off, and landed close to my car. I hiked back around and got into my car and approached the owl within 30 feet. I was able to get that “treasured photo” which I plaster on my social media site. I was on “dopamine rush” as the number of hits on my website swelled 10 times beyond any other posting I’d made in three years. I decided to tell my story on a “rare bird  website”, thinking that readers would be very impressed. The first three comments all had the same tone: I was harassing the owl and it was probably in a survival state from hunger and its long migration south. The reader feedback was just what I needed. But it helped me realized that the entire experience had become “all about me” and that the magic of seeing such a beautiful creature was lost somewhere on Facebook. I wanted to take a snowy owl’s photo, but I forgot to “ask” the snowy owl whether he was okay with it. Judging by its fright distance response, I am pretty sure that its answer was “no”. The next time I see something special in the wild, I need to remember that nature is more important than me.

The second event was completely surreal. There is a dam at the headwaters of a creek near my house. During the spring run-off many large game fish from the lake, swim through the dam to spawn. Last summer, I snorkeled in the creek near the dam and was mesmerized by the beauty of the fish I saw there. I felt very blessed to have the experience.  Go to:  www.oldnaturalist.com/an-unexpected-experience-a-fish-tale/. 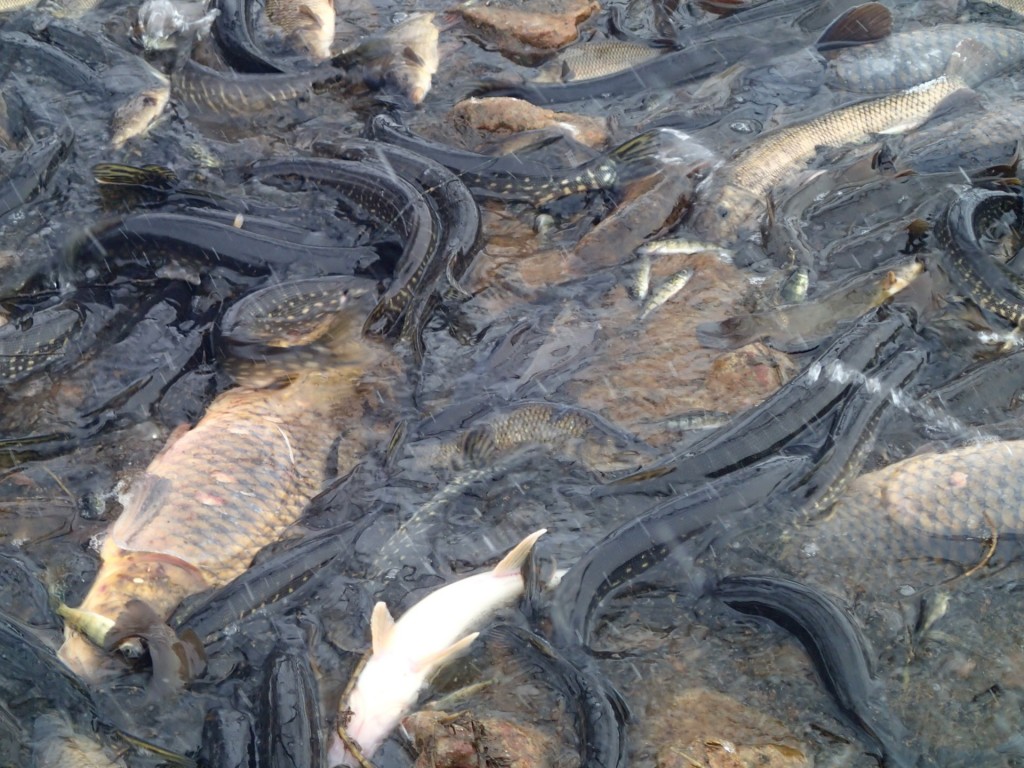 Small pike among dead carp in 6 inches of water.

This story begins during last week of December and the creek was frozen solid. I was up at the dam and noticed some open water. I walked over to explore and was horrified to see hundreds of fish trying to get oxygen to survive in the shallow water. Most of them were bullhead and carp, but there were many game fish. There were some large pike, muskie, walleye and crappie. I decided to attempt a rescue and move the larger ones from the creek side of the dam back into the lake. I went home and got my waders, a net, and an ice auger. It took me about 45 minutes to drill through the ice on the lakeside with my rusty auger. A few times, I wished I had a gas powered auger that would take care of the job in about 30 seconds. 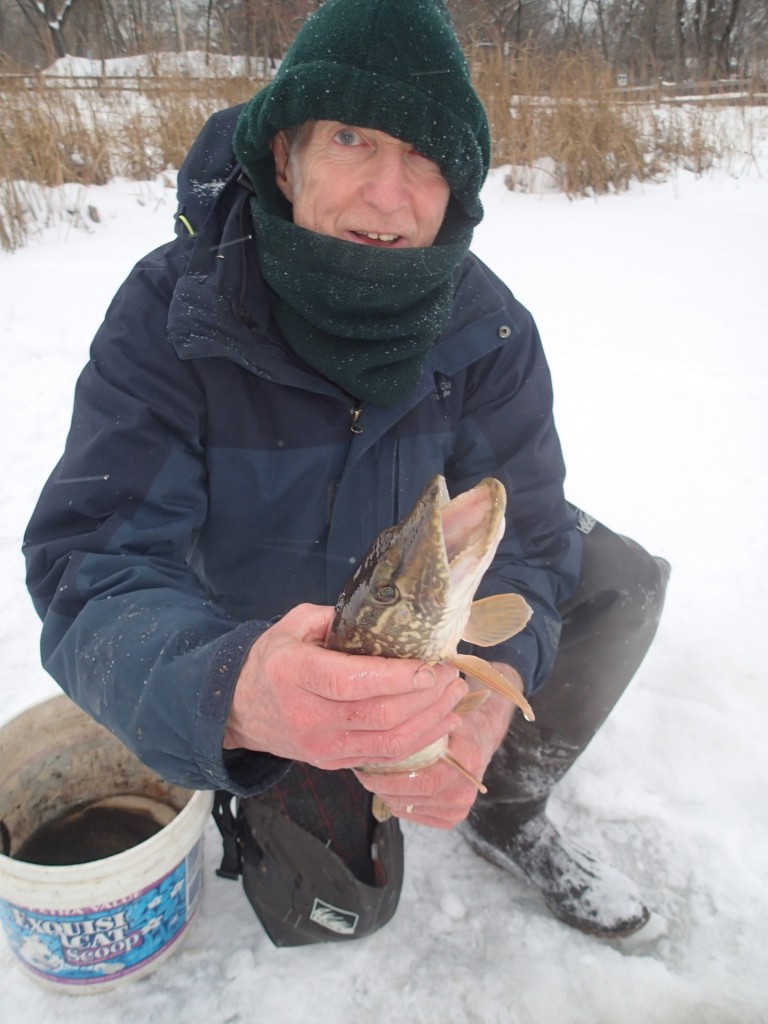 It was an incredible experience grabbing a 3 foot muskie with my bare hands, in freezing water, and then running full speed over to the lake to release it. I have never held such a beautiful and powerful living thing in my hands before. I felt a deep connection with those fish, as they were released back into the lake. The fish were facing imminent death as the January cold snap descended upon Minnesota.

After few hours of the rescue, I began to ask myself was this the right thing to be doing from the lake’s perspective? I was returning large predatory fish back into the lake. I doubt whether it was legal to do it. I feel bad that I might have broken the law, but in my heart I know it was the right thing to do.

Many people would say, “do not interfere, and let nature take its course”.   I don’t believe that those fish were unhealthy at all, they were just trapped.  If I had been with you, I would have done the same thing.  As a matter of fact, when I was a kid we found a spot that was off a creek in a backwater area that was full of spawning big black crappies.  We were fishing, and they weren’t biting very well, but we did catch a few.  Sometime later my friends and I decided to go see if they were still in that spot.  We found that there were even more, they were furiously hungry and they bit every time we cast.  We decided very quickly to take our minnow buckets, fill them with caught fish and have one of us run the bucket to the creek to release them.  We made several trips until buckets of crappies went back into the main creek.  We felt very good about pinching the hook barbs down making the fish easy to release.  That was 60 years ago, and I still feel good about it.  Thanks for jogging a boyhood memory.
Dick

This entry was posted in Connecting to Nature, Nature Notes, Winter. Bookmark the permalink.

8 Responses to A Naturalist’s Shame – Lessons from Nature