Mind in the Waters

Some of us would rather spend our lives underwater. The welcome arms of nature allows us to become part of something that is greater than ourselves.

Editor note: Click the photo to get a full screen view. 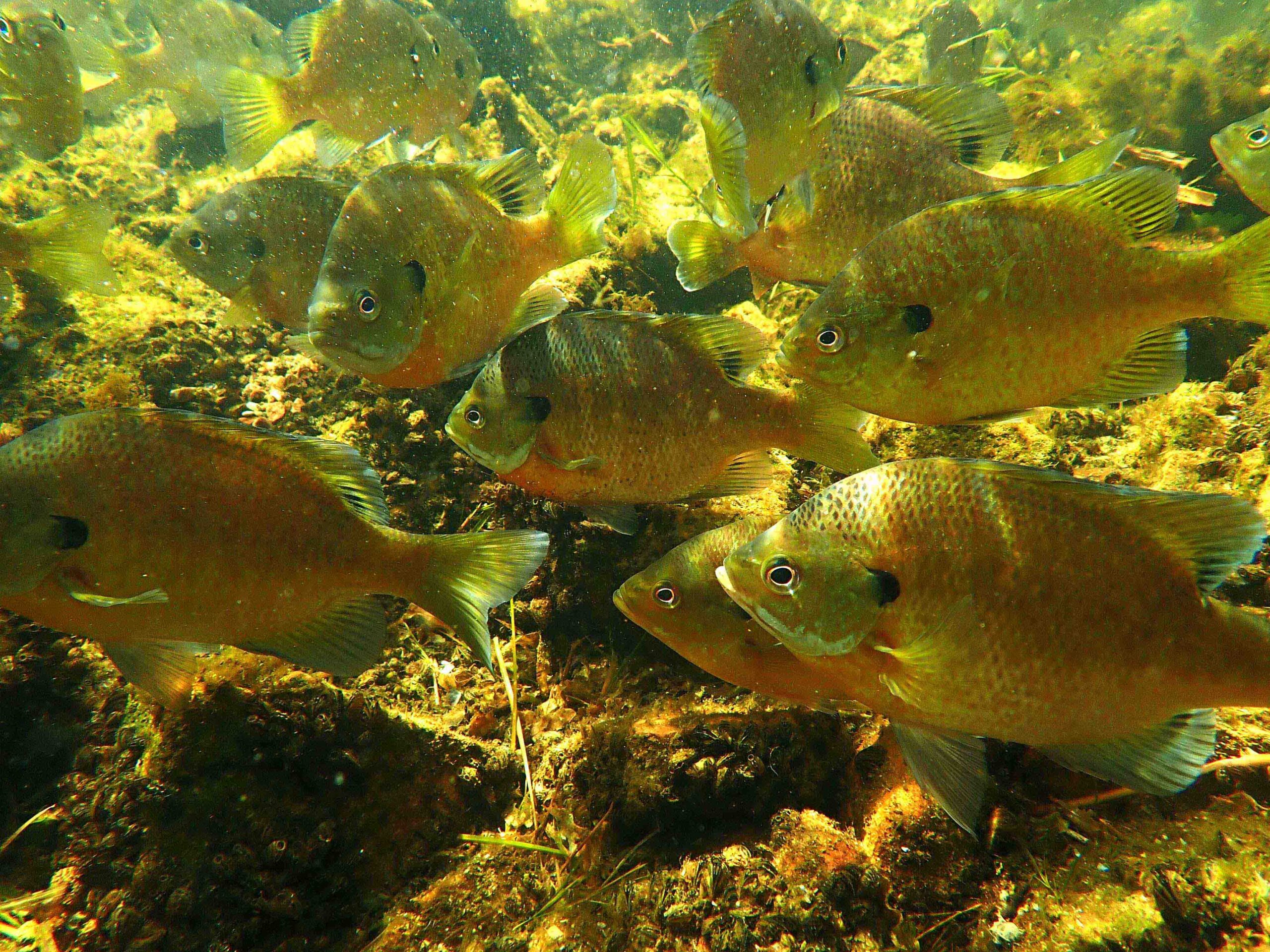 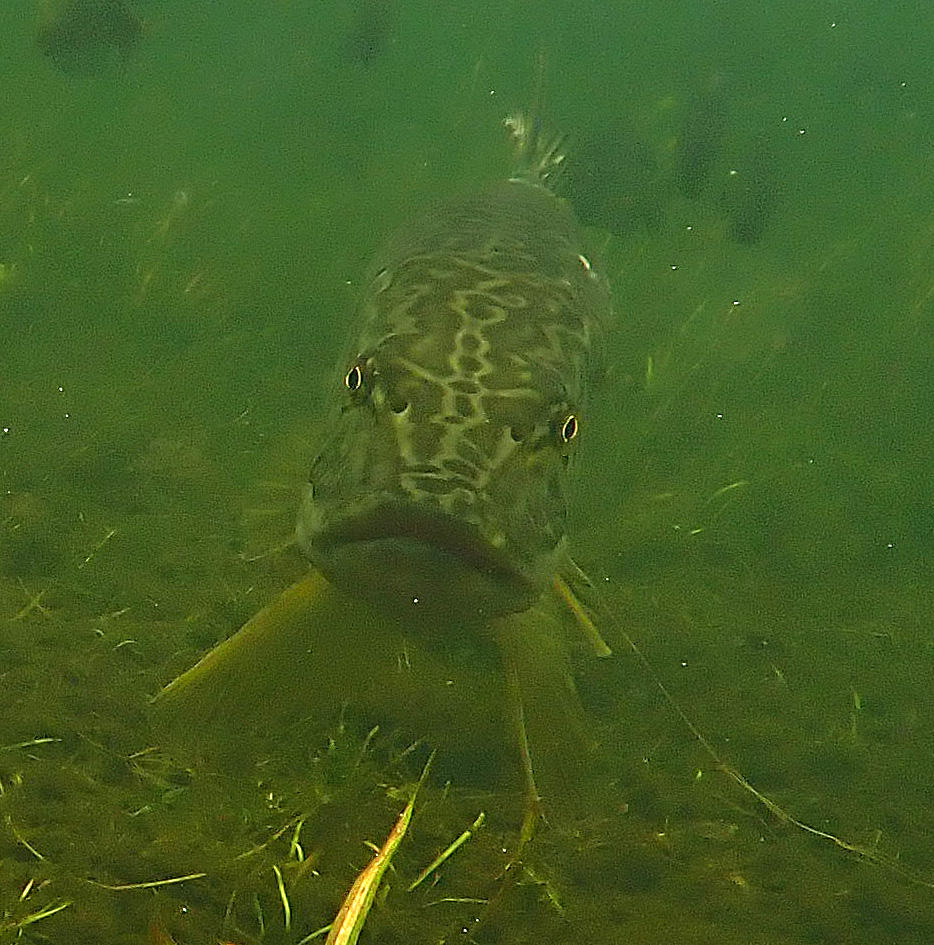 Eye to Eye with a Northern Pike
Photo by Lawrence Wade

Sacred
Liminal
Layers
I take in the surface of the stream –
weeds and lily pads rising above
ducks and fishing bobbers skim
clouds, trees and sun reflect 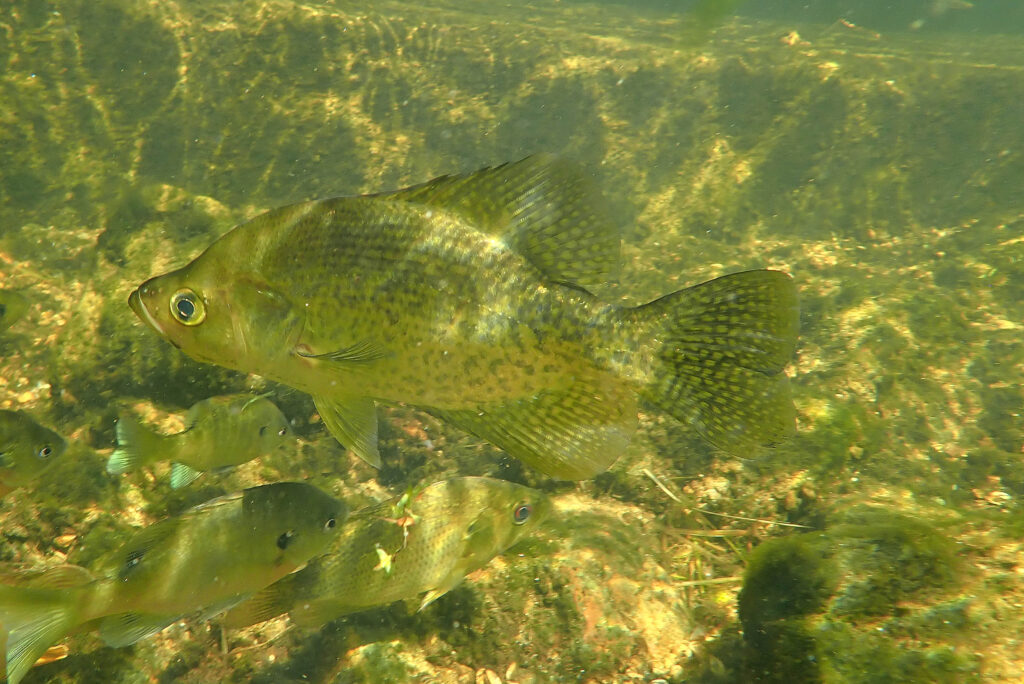 Black Crappie
Angel of the waters
Photo by Lawrence Wade

Lying on the water, masked and snorkeled
aquatic realms and rooms divided by the plants and rocks that were inferred at the surface
Crappies and sunnies, muskies and carp, northern and bass find me curious or frightful
I grasp a branch or a rock to stay as still as the fish do without struggle
To watch in awe and delight, and then follow through ribbons of plants. 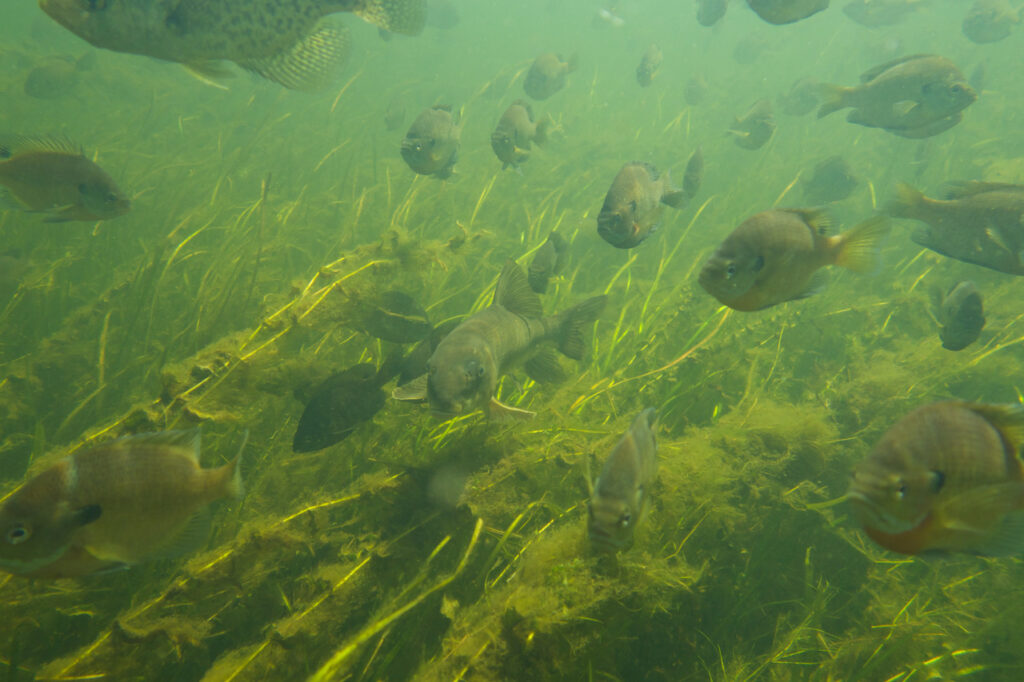 Mixed school of bluegill and bass.
Photo by Jane Ball

To the shadowed spaces beneath a thick mat of algae.
The bigger fish seek this out, sitting at the edge of light and dark
They move into and out of this mystery with ease, appearing and receding
It is their domain to know and for me to ponder what riches reside there. 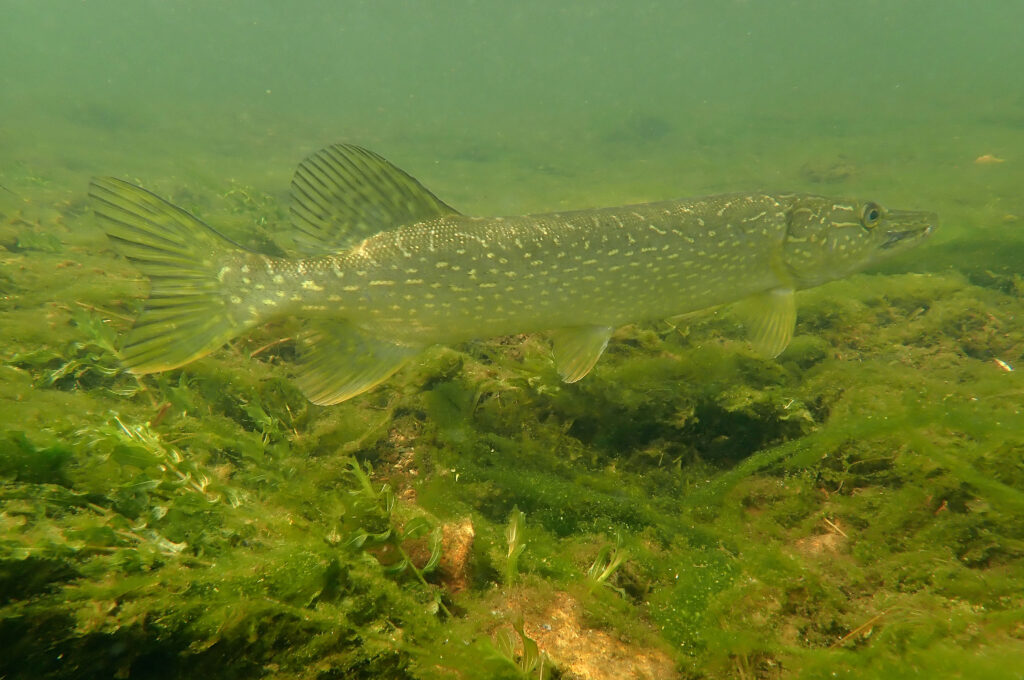 The silty water of mid summer allows clear awareness of only the closest myopic view.
A few fish glide into this layer of clarity
More are softened and less and less defined as the distance grows
Reminding me of my own limited consciousness.

Rupturing the surface I return to the air and earth.
With its familiar breath and vision
I drip with evidence of the liminal sacred layers beneath
My heart and mind open, grateful, elated by this venture across boundaries of awareness.
Poetry by Cynthia Eyden 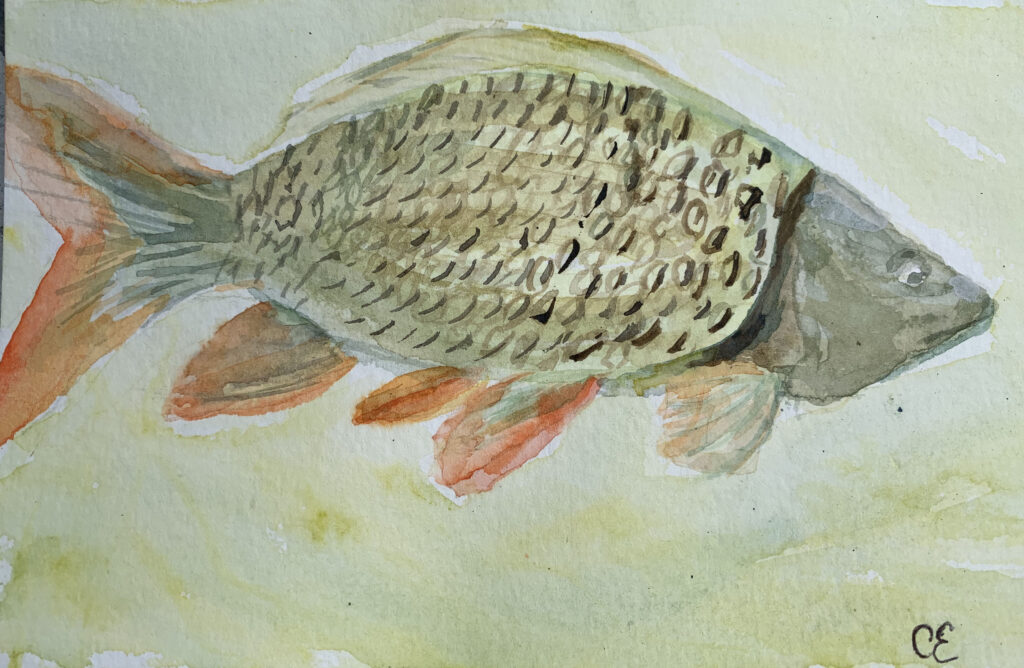 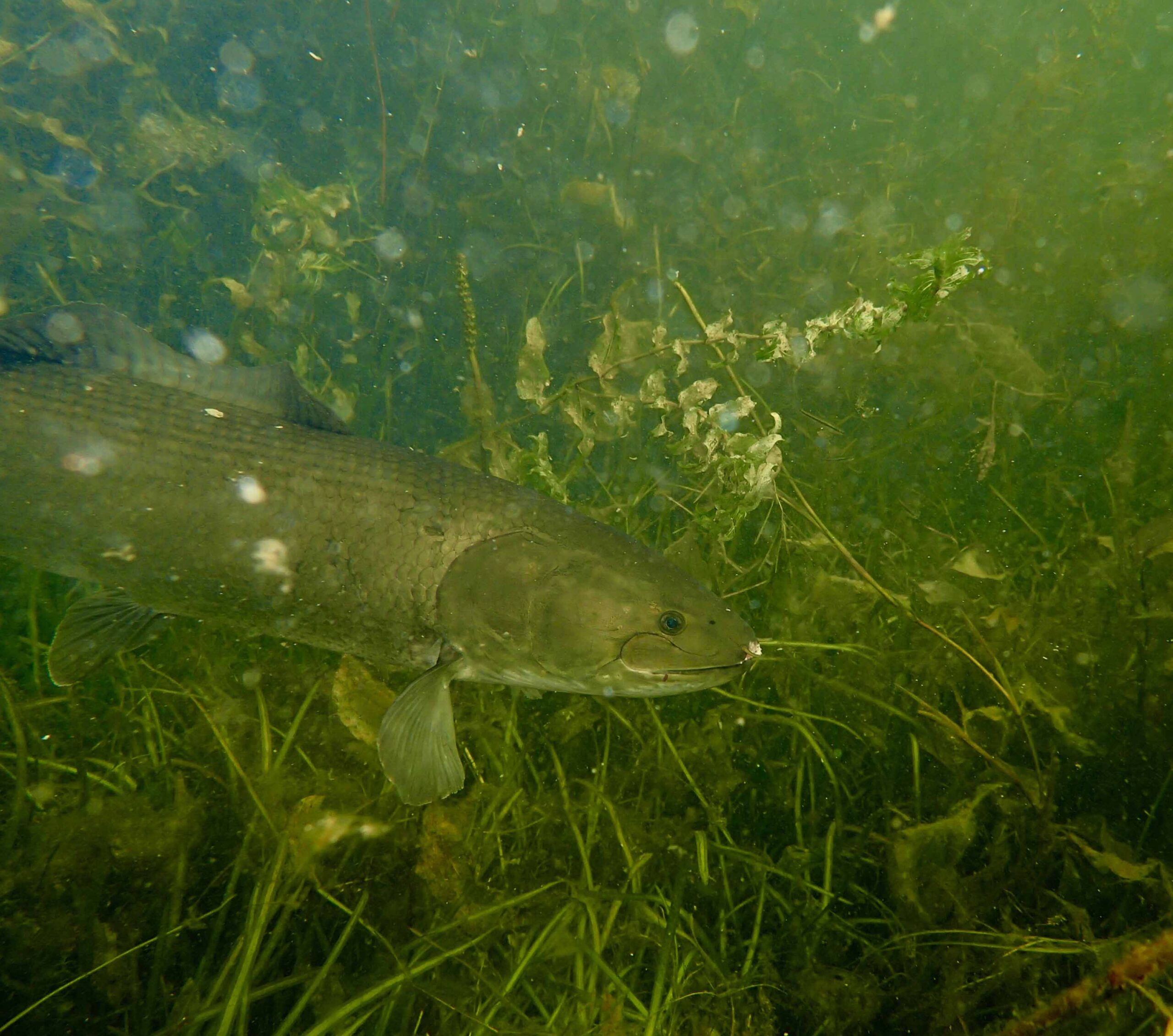 The bowfin or dogfish is snake-like. It is a primitive fish that was around during the time of the dinosaurs.
Photo by Jeff Saslow

Under surface of air, trees and grass
Underwater, creek water
My insides open up to a fluid world
That has a different pulse
My frenetic stiff awkwardness slaps the weeds, rocks and tadpoles
Until I settle, watch and wait
Using my flippers to gently move
I then drift in and out of currents
As my land thoughts recede I am lulled by the undulating movement of water, plants and creatures. 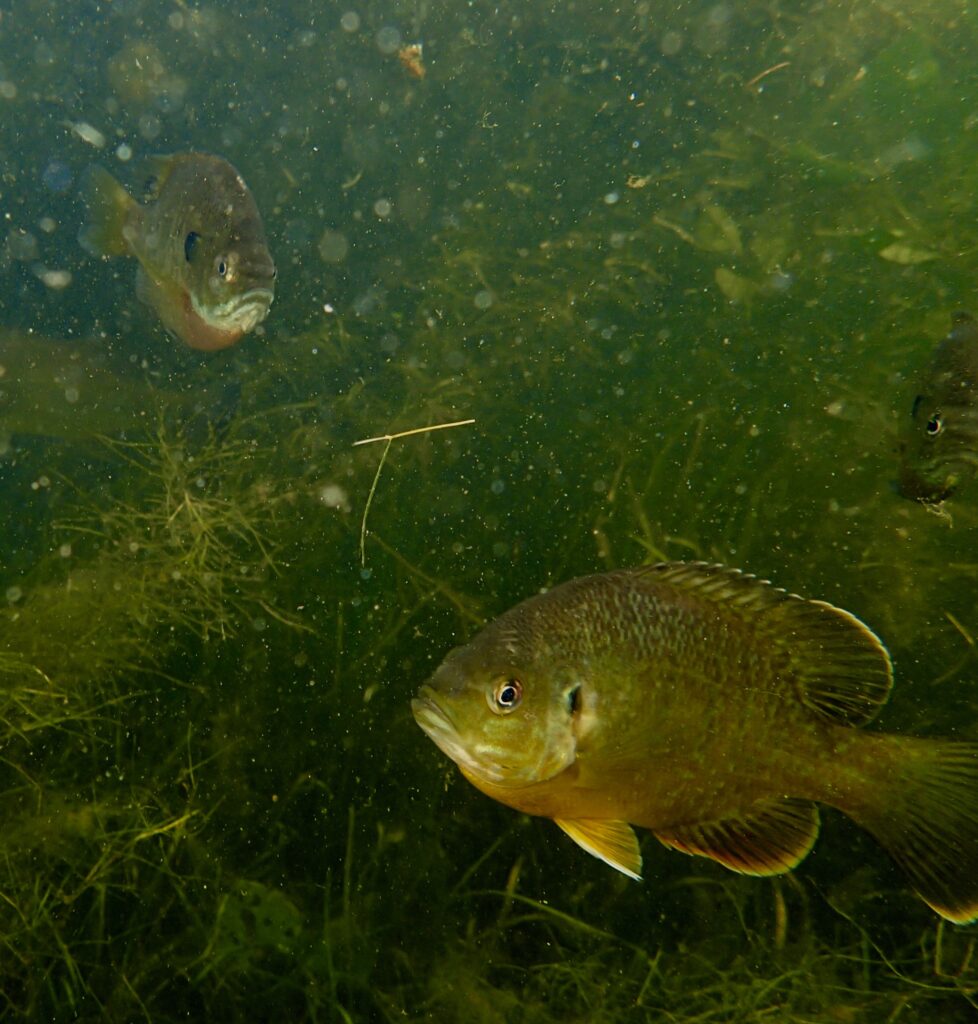 It is not until later that I am aware that my heart is open
My body has become electric
I am two feet away from a bluegill
She is staring at me for a long while
Her gills are moving water in and out
Mesmerized, my sides gently ache
As we breathe together 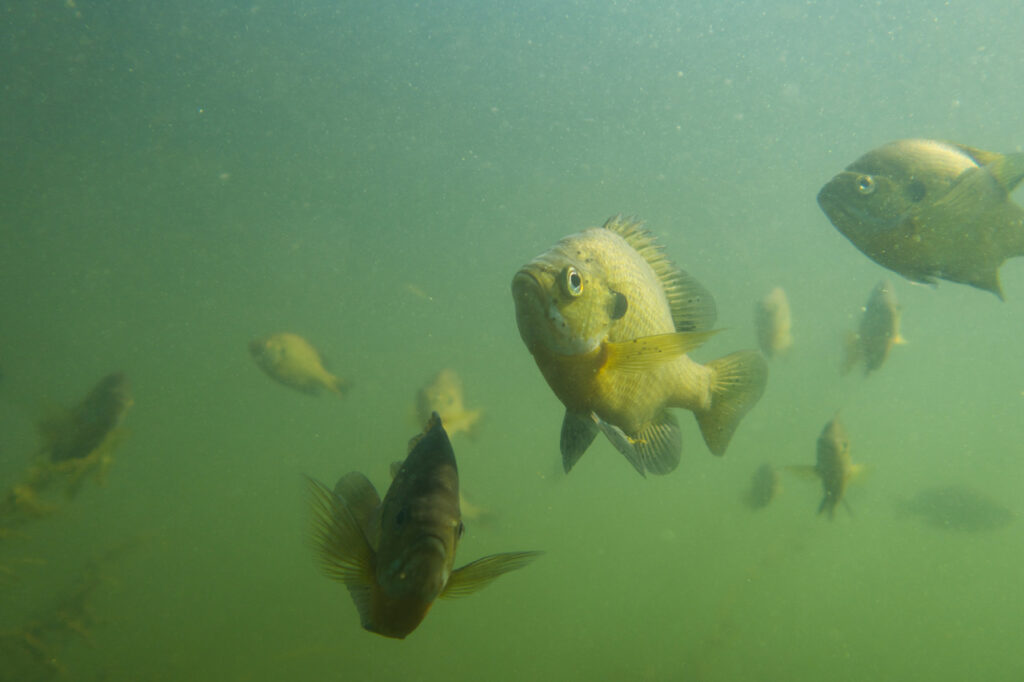 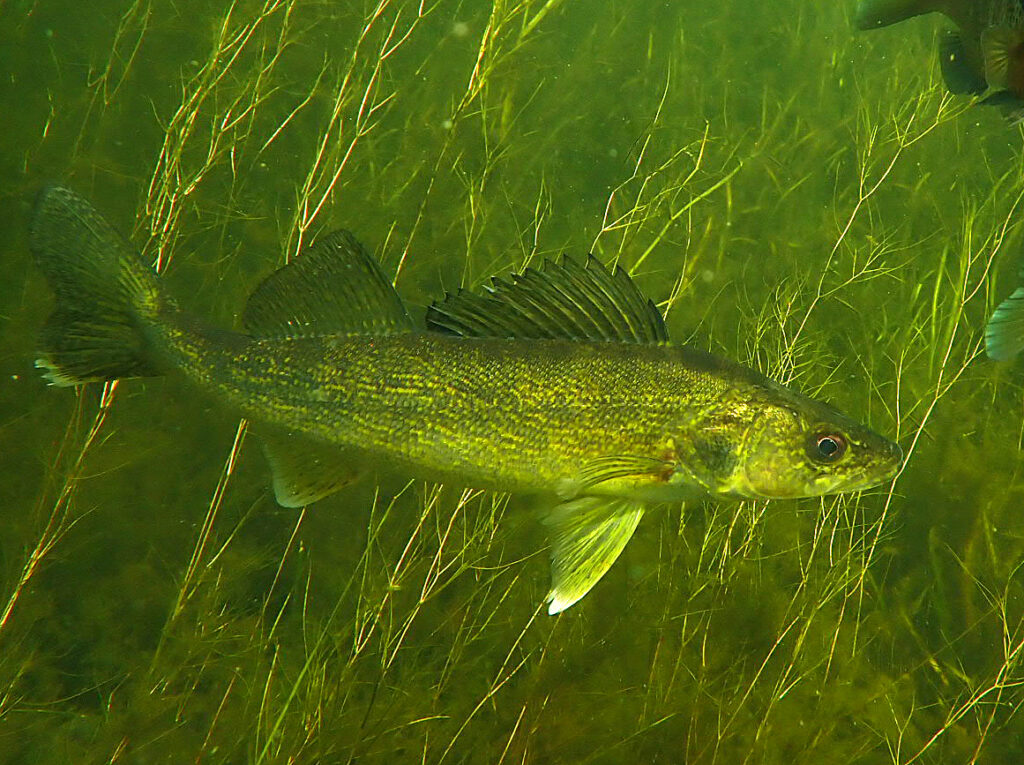 Have you ever had a walleye swim right up to you and look you in the eye? It changes you.
Photo by Lawrence Wade 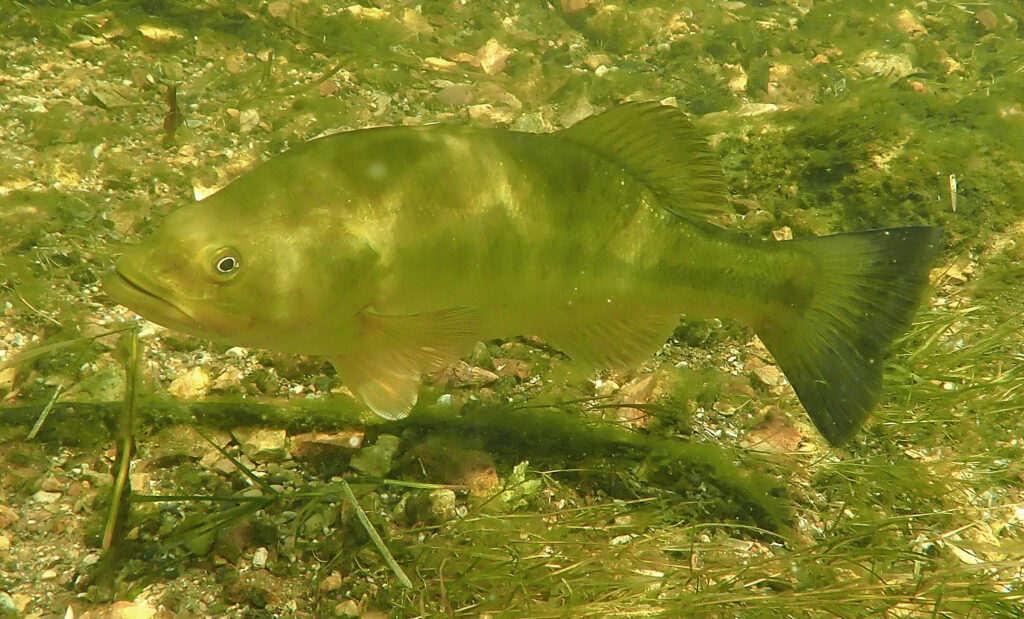 The big bass swam right past me and the light danced off its back.
Photo by Lawrence Wade

Paranoia has stepped in where
Covid has left off
No one gets away free
Even though we posture the charade of control
It is today, tomorrow or next week or . . ?
We don’t know

Restless
The news announcer’s mouth
Bites through our security blanket

Restless
When November comes
Will the blanket keep us warm?
How about in January? 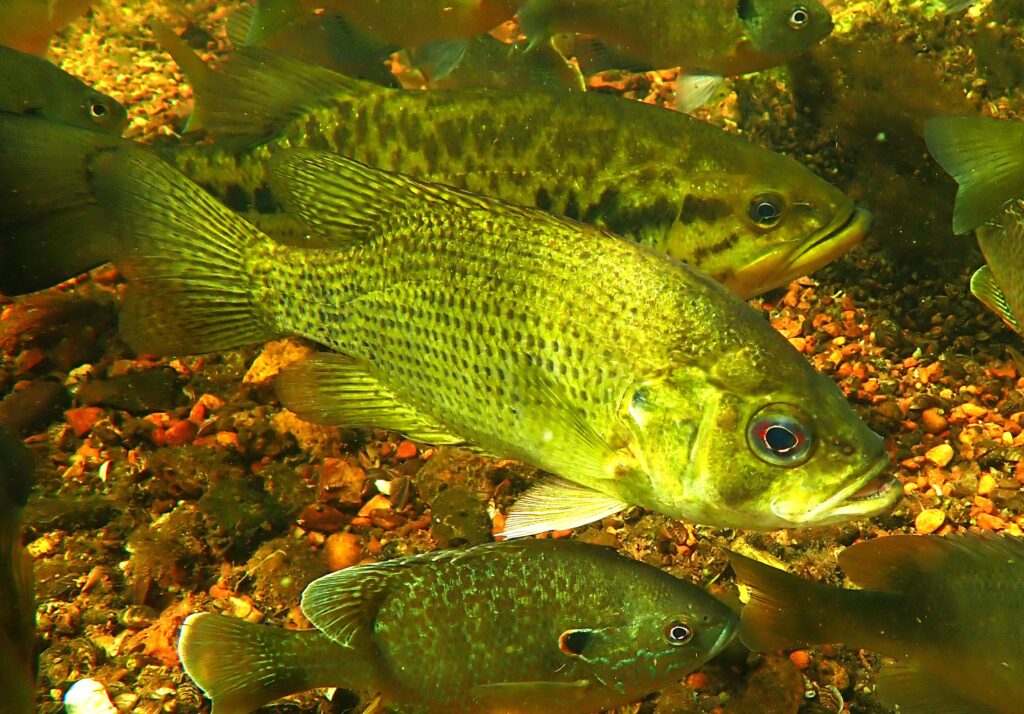 The rock bass is in the sunfish family. It can be identified by its reddish eye.
Photo by Lawrence Wade 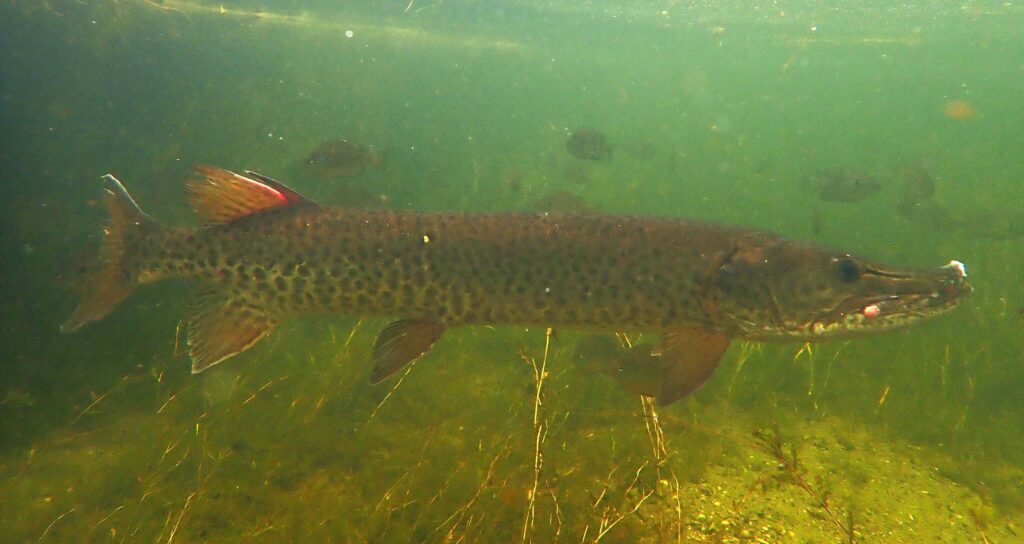 We saw this fish several times during the summer. It had sores on its mouth from being “caught and released”. Its left gill flap was torn off. The fish was roughly 4 feet in length. A lion in the water – A top predator. 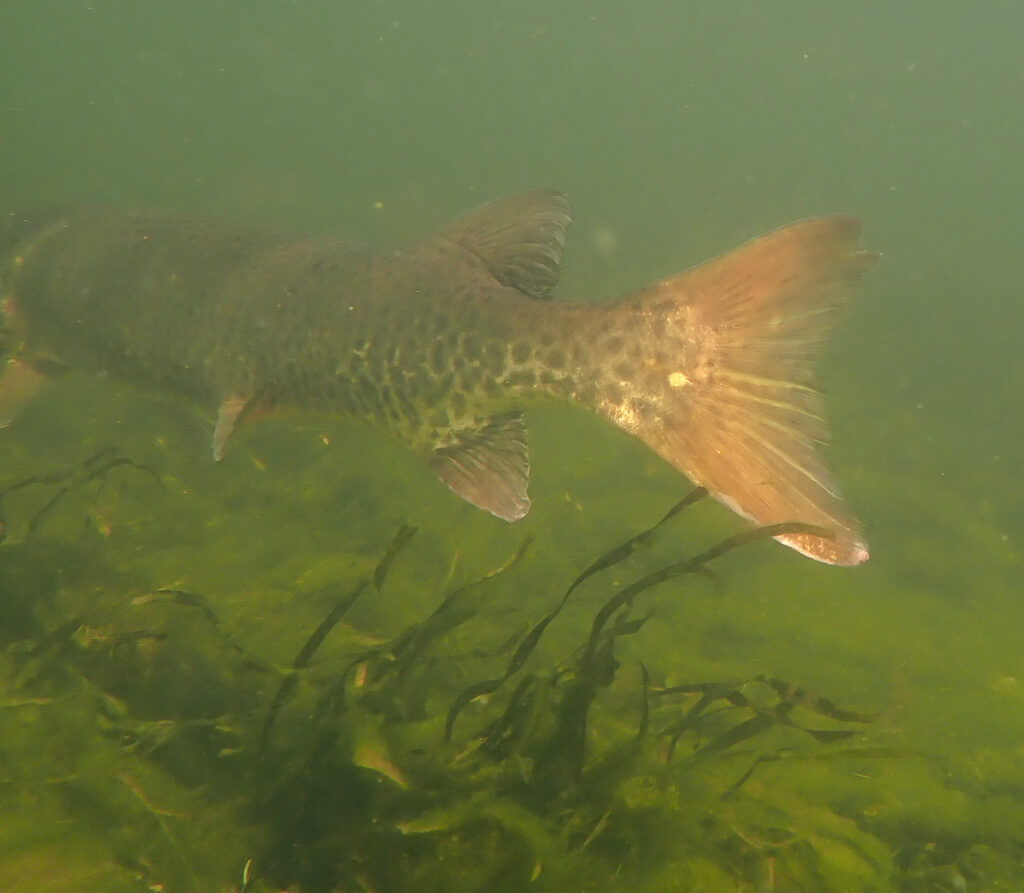 The muskie slowly swam away.
Photo by Lawrence Wade

Reader and contributor, Paul Gagner shared: “When we lived on Gray’s Bay (Lake Minnetonka),  12 years ago, there was a “friendly” muskie that I could feed and pet it’s head! It also had a scar on the top of it’s back. It may have been attacked by another fish or hit by a small prop.”
Paul also added, “Did you know that the grooves that emanate outward along the snout is a sight line for lining up prey?  Amazing creatures, eh?” (click on photo to enlarge.) 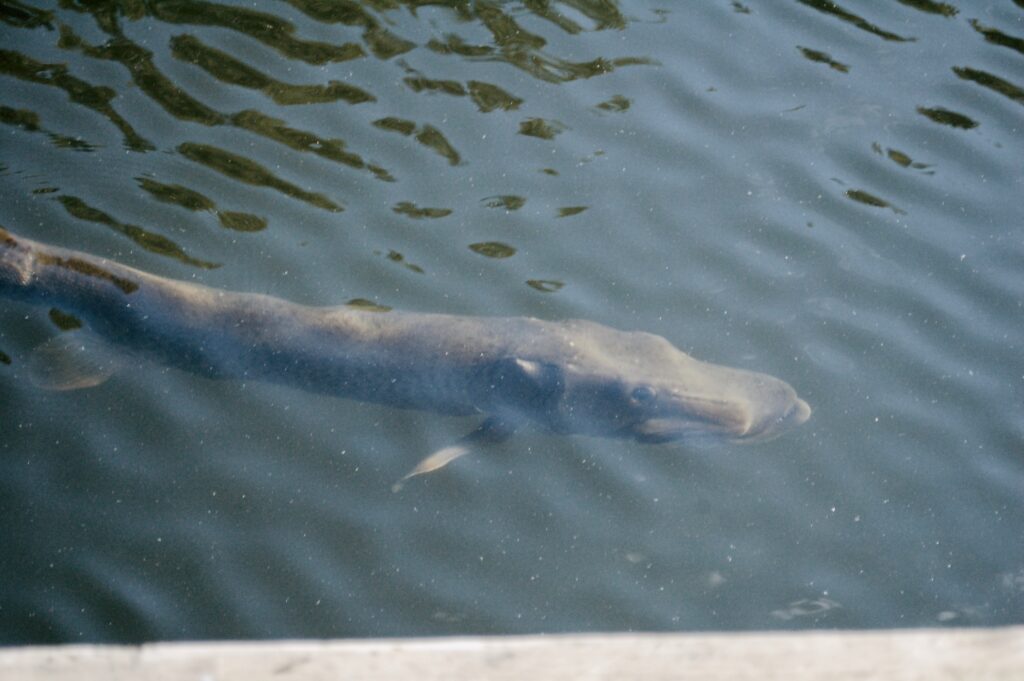 This entry was posted in Connecting to Nature, Nature Poetry, Photography/Art, Summer. Bookmark the permalink.