Why did the Turtle Cross the Road?

Stories of guardianship and caring for the Land

A Snapping Turtle in a Bit of a Predicament

by Linnea Palmstrom. Linnea will be a Freshman at UCSB. Previously, she contributed another story about rescuing some turkey eggs from  flooded Nine Mile Creek. Go to:  www.oldnaturalist.com/flood-rescue-a-guardians-tale/ 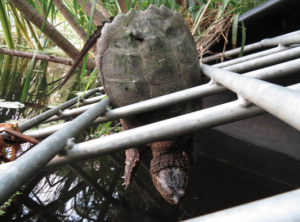 The snapping turtle is wedged tightly in the drainage pipe grate. 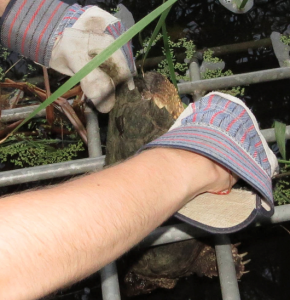 The turtle sticks its front legs out to prevent me from pulling it out of the grate.

It was just another day going to Nine Mile Creek by Edina High School. I had enjoyed walking around the wetlands area by the lower fields and it was getting late, but I decided to make one last stop to a man-made pond to look for a mallard mother and her ducklings. When I got there, I discovered that a snapping turtle had gotten stuck in a grate covering the entrance to a drainage pipe. The poor turtle was hanging upside down with its bumpy shell wedged firmly between the bars of the grate. At first I wasn’t sure if it was alive. As I walked closer I saw its head move up out of the water, and I knew it could still be saved. I wanted to help it and went home to get some leather gloves to make sure that I had some protection. When I got back, the turtle hadn’t moved. I grabbed the back end of its shell to pull it up and out of the grate; however, the turtle didn’t want to help me. It kept sticking its front feet out to stop me from pulling it away from the bars. It would also kick my hands with its hind legs and threaten to bite me – thankfully its position and the bars of the grate stopped its long neck from reaching me. After a couple of minutes, I finally freed the turtle. I slid it next to the water and it quickly swam away. Though the snapping turtle was irritated at me for helping it out, in the end, I think it was happy that I did.

Why did the Snapper Cross the Road?
By Steve Casper, Eden Prairie, MN

Photo by Paul Vitko. To see more of his work go to: paulvitko.com

The other night around midnight I was driving in Edina near Minnehaha Creek when I saw a car pulled over in a strange part of the road. As I drove by I could see in the headlights that a young man was trying to herd a big snapping turtle back to the creek. I pulled over and gave him a hand- it wasn’t easy. If you pick up a snapper  by the shell, it may not be able to bite, but it can still get you with its sharp claws!

Anyway as we got him back, the fellow said this was the second time that day he’s moved her. He said he’ll be driving down the same street again in the morning and he hoped not to see a dead turtle. I said I’d be coming by again the next morning, too. Well it’s been about 3 weeks now, and no dead turtles on that stretch of road- always glad to see that!

Blessed By My New Friend, A Silver Maple
By a teacher from the Hopkins School District

On a particularly emotional day, I was sitting outside on my patio soaking up the sun and listening to the sounds of nature. After awhile, I focused my gaze on a silver maple tree that sits in my backyard. I was looking not directly at the tree, but beyond it. Suddenly, I could see the maple’s energy field, a yellow hue that outlined each branch. As soon as I started thinking about what I was seeing (rather than feeling it), the field would vanish. On and off for about an hour, I received this loving, accepting, and calming energy. My new friend, a maple, blessed me that afternoon. It said to me, “You are connected. You are not lost.” Before I went inside my home, I thanked my friend for the gift it gave me. Every day I go outside or see my friend from my window, I am filled with gratitude.

Eye to Eye with a Dragonfly
Amy Flatten, Project Get Outdoors
www.facebook.com/pages/Project-Get-Outdoors-Inc/137770441949 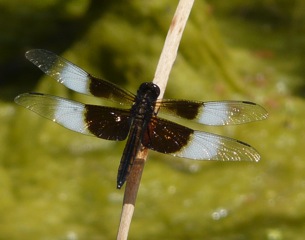 About a month ago, I was offered the option to catch and identify dragonflies, by Juliane, a dragonfly enthusiast. In actuality, it was an offer to run around with a large bug net chasing dragonflies. They were zooming past with the utmost speed and were true aerial acrobats. It was remarkable to watch them!  Upon the first successful catch, Juliane demonstrated how to very carefully remove it from the net by grasping its wings. In doing this, we were able to get a closer look at the insect. I appreciated her care for such a small creature!  As I stared at it, the dragonfly unblinkingly stared right back.  How large the world must seem to such a small creature as this! But what a large predator it would be, if I were the size of a fly – yikes!  We proceeded to look at how close the eyes were to each other, any unique markings on its sides, tail and face. She would lead me to a picture in her key that would match.  Yes, I will remember my one-on-one time with an experienced dragonfly enthusiast, but I will also never forget carefully holding these wild insects and wonder what’s on their mind as they are happily released.

When was the last time you really looked at an insect? Maybe it’s time to have your own insect encounter and delve into the six-legged world! 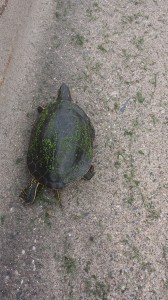 I was walking around Normandale Lake this afternoon when I got to the boat launch area, I saw this turtle trying to cross a two way road with a car exiting the boat launch onto the road.  I stopped traffic, and the turtle turned around and headed back toward the lake.  It was still slowly walking along the boat launch road, and I followed it.  I kept saying, “Come on turtle” and each time I did it started to walk faster.  When it got to the curb, I gave it a little nudge, and it climbed onto the curb and out to the lake.
I saved a life today -it feels great!

March 12, 2013 – The kestrel and I sat in front of the windowed wall in our wildlife viewing room at the nature center for 45 minutes (his favorite place in the world). There were a lot of birds and squirrels to watch. A goofy turkey watched us with his beak right up against the window. The kestrel spent 15 minutes preening, making himself very beautiful. He spread his wings and tail, and “talked” a bit. Scratched his head and ended up with a rakish feather hanging over his eye – made me laugh. He was a happy little boy that day.

March 13, 2013 – End of story…yesterday I got to look into the eyes and soul of a special little bird. Today his soul has been set free. After 15 years of being an excellent ambassador for his species, and helping us to educate thousands upon thousands of people, our kestrel’s spirit is now free to soar. He will be greatly missed, but we were honored to share in his life.

Where Smart Birds Nest
Dewey Hassig – Dewey is a beekeeper in Minnetonka. 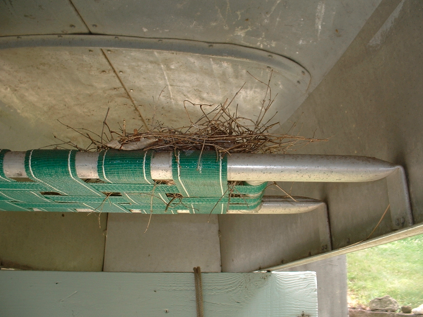 Cardinal nest on the seat of the underside of my canoe.

I won’t be canoeing this spring. My canoe is upside down on a rack on the back of my garage, and a Cardinal has made it’s nest on the seat. At least that Cardinal has a dry spot to nest.” (Editor Note. Dewey sent this to me in May and I saw him a month later and he said that the Cardinal abandoned the nest with one egg in it and re-nested on the opposite seat).

This entry was posted in Connecting to Nature, Nature Notes. Bookmark the permalink.