Posted on September 3, 2012 by Lawrence Wade 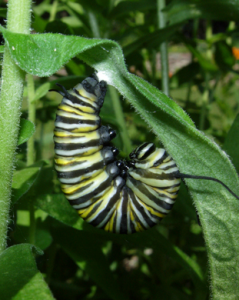 There wasn’t a big going away party last week, but there should have been! The monarchs have left for their wintering grounds in Mexico. It was a rough summer for the monarchs, probably due to the lack of rain here. Most summers, I see monarchs every day gliding on the wind currents, and moving from one flowering plant to another. This summer, I saw very few monarchs. In August there is usually a spike in the population before they migrate, and this summer it was not the case. I know I’ll see some stragglers or maybe a last wave of orange, but their great journey has begun.

Today, I went west to Schaefer Prairie, hoping to catch up with the monarchs, and be in their presence one last one time. There were a few stragglers at the prairie, but the big show was not the monarchs, but the prairie itself. The subtle, but deafening sound of the crickets, the native sunflowers and big bluestem swaying in the gentle breeze; a white tail buck, pheasant and more.

In past years, my experiences with the migrating monarchs have been mixed. A few years   back, at the MN Landscape Arboretum, I saw a clump of thousands of monarchs in the trees, only to return the next day with a school group and the butterflies had moved on. 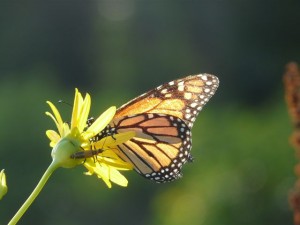 Another year, I was working at a school on the north side of Lake Minnetonka, and there was a south wind blowing.  I discovered about 50 monarchs feeding on New England Aster near the school. The south wind continued for 3 days and the number of monarchs ballooned up to several hundred. They could not make the lake crossing in the strong south wind. I changed my teaching program for the week, and started bringing students out to the asters and the monarchs. It was a magical teaching experience orchestrated by nature: monarchs feeding and students totally captivated. On Friday, I brought my last group out there, and the monarchs were gone. The wind had shifted to the north, and they must have got up into the wind. The students were devastated that the monarchs were not there. I was secretly hoping they had made it all the way to Iowa by nightfall.

Where are the orange travelers headed? Midwestern monarchs travel to the Sierra Madre 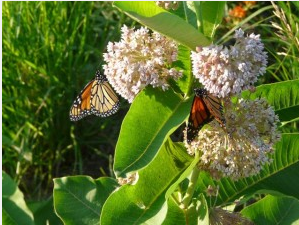 Mountains in Central Mexico, a journey of over 1500 miles if you live in Minnesota. I have never seen the monarch wintering grounds, but if I had a “bucket list” it would be one of the top ten places I’d like to go. Photos of monarchs in the Sierra Madre shows pine trees “dripping” with orange, and visitors have to watch where they walk, so as not to step on resting butterflies.

My wife and I were in Guadalajara, Mexico last summer, and the “monarca” occupies a special place in hearts of the Mexican people. We saw numerous sculptures and paintings that were adorned with monarchs. The monarch has a special place in my heart, as well. I say good-bye to my orange friends,  “Vaya con dios. Voy a ver a ustedes el junio proximo.” 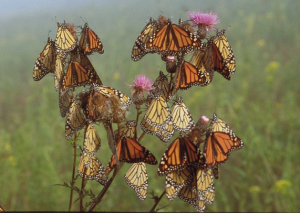 This entry was posted in Insects, Summer. Bookmark the permalink.