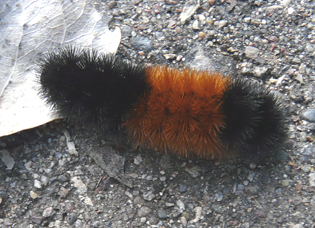 Wooly bears are fuzzy caterpillars and tend to appear in great numbers when the weather gets warm in the fall. They are the caterpillar of a small white moth known as the Isabella Moth. Kids love to handle them because they are so fuzzy. In late September, I start looking for wooly bears in my neighborhood. If it is a warm weekend, you are likely to see them on hiking trails. Wooly 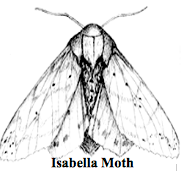 bears eat small weeds and one of their favorites is plantain, a common lawn weed. 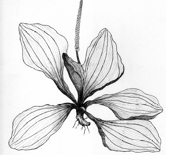 There are many studies that you can do with wooly bears at home.
1. What do wooly bears like to eat? Go outside and collect some plantain from the lawn as well as several other weeds. Put them in the containers and leave them over night. What weed did they prefer?
2. Wooly bear races: Line up the wooly bears in the center of a circle and see which one gets to the edge first.
3. Do wooly bears prefer light or dark places? Create an environment to test this question.
After a few days wooly bears must be returned to the place they were found. 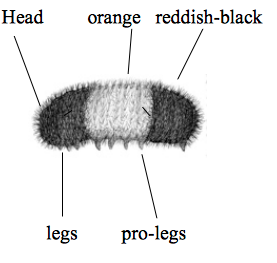 If you find a wooly bear, check the size of the orange and black bands and predict the winter based upon their observations. Do not remove the animal from its habitat, but note the pattern observed and make a tally by the pattern seen on the chart below. If you make some observations about wooly bears, post a comment on this website. I will post a final tally and make a prediction for the winter by October 20th.

Last year, in 2011, I did not get many reports of wooly bears. Although my sample size was small (14), 50% of the wooly bears seen predicted a mild winter. Do you remember last winter? It was very mild.

This entry was posted in Connecting to Nature, Fall, Insects. Bookmark the permalink.