What is Your Eagle Story? 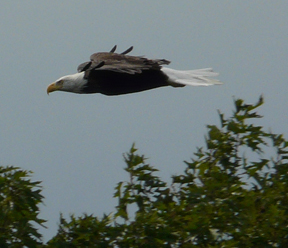 During the afternoon of Xmas eve, we were in my house in the Eden Prairie suburbs preparing for dinner. A neighbor came to the door to let us know that an eagle had landed in a tree in our backyard. It was munching on a squirrel that was secured in it’s claw. Racing back into the house I grabbed my 35mm digital camera with a telephoto lens and was lucky enough to snap some images to record that fabulous moment, I was within about 30 feet of where it was perched.
Earlier that afternoon, a large coyote had run across our backyards…

This entry was posted in Birds, Fall. Bookmark the permalink.

3 Responses to What is Your Eagle Story?