My Teacher has Four Legs

Editor note: Gretchen and Dick Alford are people from the Dog Tribe and each share their story.

Gretchen:
I just returned from the second of our twice daily walks in the back woods with our now 8 year old British yellow lab Bravo, and decided to reflect on what others might describe as a routine experience.  It’s never that with Bravo, however; as each morning and late afternoon provide new scents, sounds and adventures different from yesterday and ‪tomorrow and impossible to replicate. 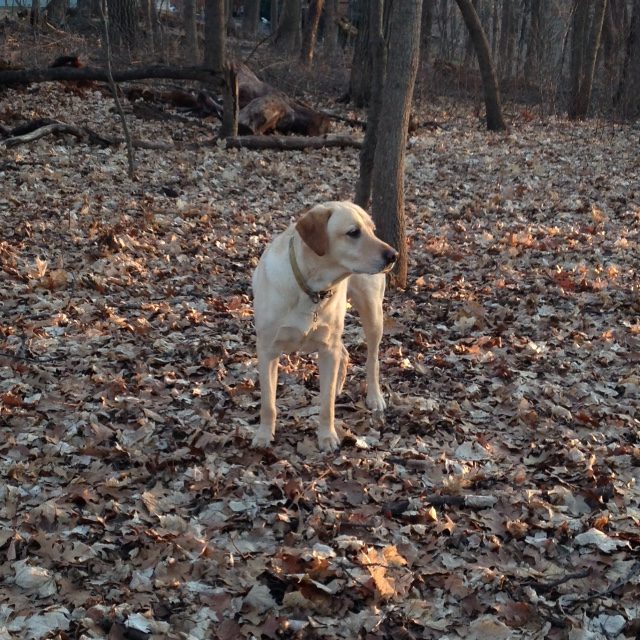 The seasons change the woods in such remarkable and subtle ways as do the light, bird sounds, squirrel chases, other dogs, neighbors on walks and kids exploring.  I get to learn and appreciate on a daily basis both the complexity and simplicity of life.  My teacher has four legs, bright appealing eyes, a constantly sniffing nose, ears that can hear through windows and doors and a body that moves effortlessly through the woods’ terrain.  If I didn’t need to occasionally reign him in with my words to avoid his going into the roads that surround this little piece of heaven on earth, no words would be spoken at all to communicate fully and oh so clearly.  What a connection, what a gift, what a day brightener no matter what the weather.  I’m more in touch with the universe wherever and whenever I am with Bravo than at any other time. “Bravo to that”!

Dick:
Having had 6 labs in the field with me over the years, some attributes of each stand out in my memory. All had exceptional hearing, noses and retrieving ability. For half of the 21st century, our latest, 8 and ½ year old British yellow lab Bravo, has stolen my heart like none other.

When we chose him from the litter, we were told he would eat as fast as possible taking no prisoners. After inhaling the contents of his food bowl twice daily ever since, he proceeds to push it aside to capture any kernels that might have escaped. Yet, when we’re at the dinner table, this aggressive eater sits patiently and silently, large brown eyes fixed on the prize, hoping to lick our plates at meal’s end. That same stare shows up around 4:30 every afternoon, as he finds us and reminds us it’s time for a walk and supper.

On mornings when I attempt to sleep in, he goes downstairs to retrieve a shoe which he then brings up to the bed and drops on my chest. “Time to get up, Dad”. I then ask him to “go get the other one”. Sometimes he hits the mark, but often I’m presented with any one of my shoes or slippers he can find in a hurry. He also senses my moods, and quietly retreats to the stairs or loft if there’s tension in the air. He completely understands many hand gestures and one syllable voice commands. 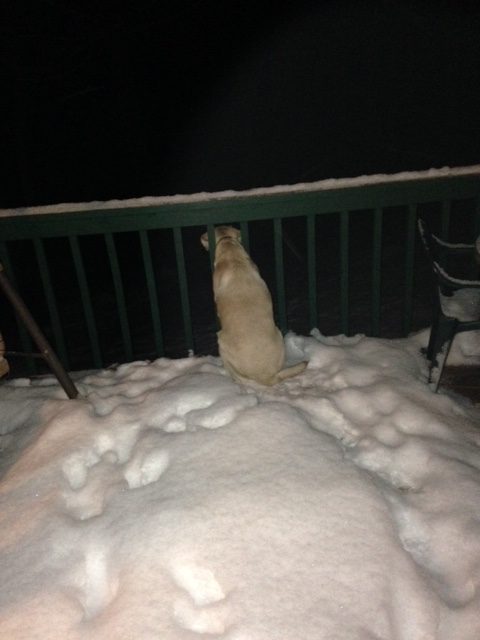 One morning he followed me with my cup of coffee out on our deck, and as usual put his head through the railing so he could stare out at the small woods that is our back yard. He soon spotted and heard the only rooster pheasant I’d ever seen in that woods. He quickly spun around, raced back in the house and headed upstairs. When he returned, he spoke to me without a sound. He sat in front of me, head and pleading/proud eyes poised upward, with a stuffed pheasant in his mouth that he had retrieved from his toy basket. He then squeezed the toy so it would make a squawking sound. Clearly he had made the connection and presented me with the next best thing any master would treasure.

This precious dog knows us, and is still teaching us to this day with his passion, perseverance and grit!! 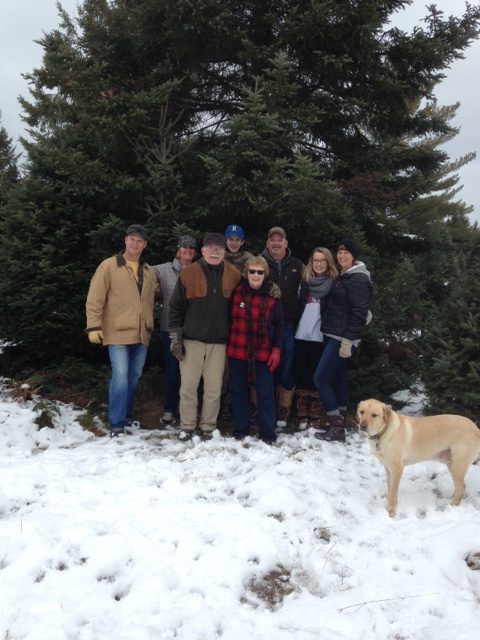 This entry was posted in Animals, Connecting to Nature. Bookmark the permalink.

2 Responses to My Teacher has Four Legs