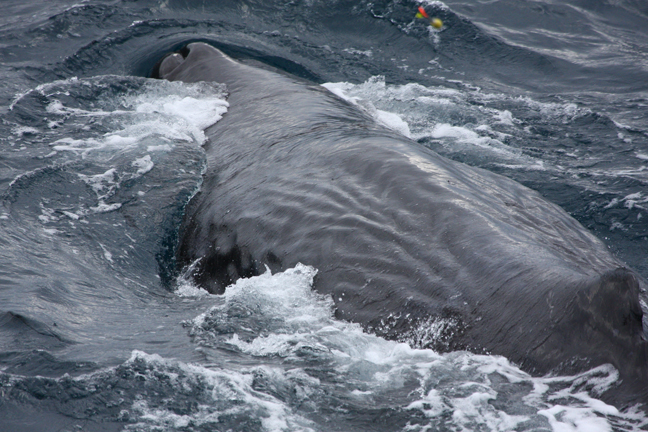 A sperm whale swimming away from the ship. The blowhole is at the upper left hand corner of the photo.
Photo by James M. Cotton, NMFS

Mom’s the Word
Robert Pitman, Whale Biologist, NMFS
I was aboard a Japanese research vessel and we approached a pod of sperm whales. The adult females were 30 to 35 feet long, lying side-by-side and moving slowly away from our vessel.
We had cut the engines and just by chance our vessel glided to a stop where the group had reassembled. Just as we were getting ready to leave, we noticed for the first time that there was a newborn calf in their midst.

Our tiny calf was spasmatically flailing at the sea surface with a tail it clearly had not gotten the hang of yet. It looked like a newborn fawn trying to get up on wobbly legs for the first time. 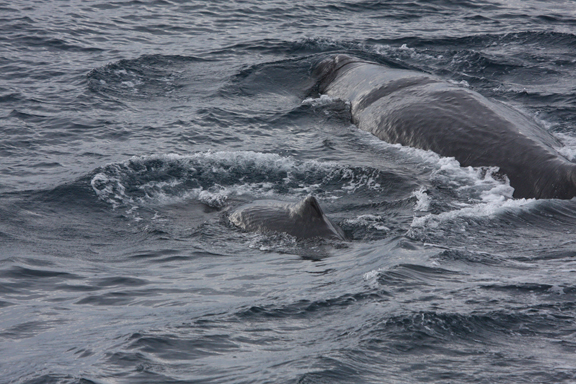 Then, an utterly miraculous thing happened. One of the females appeared to suddenly become aware that the struggling calf was positioned between her and the ship only meters away. She dropped her massive lower jaw, carefully took up the calf in her mouth, and rolled over, depositing it on her other side, putting herself between the boat and the baby!

There was stunned silence onboard our vessel. Everyone on the boat had connected to what just happened: a concerned mother had, without a moment’s hesitation, put herself between her young and a perceived threat. I was standing on the bow and immediately swung around to see everyone on our little expedition staring at the water, visibly shaken. We engaged our engines and slowly pulled away. 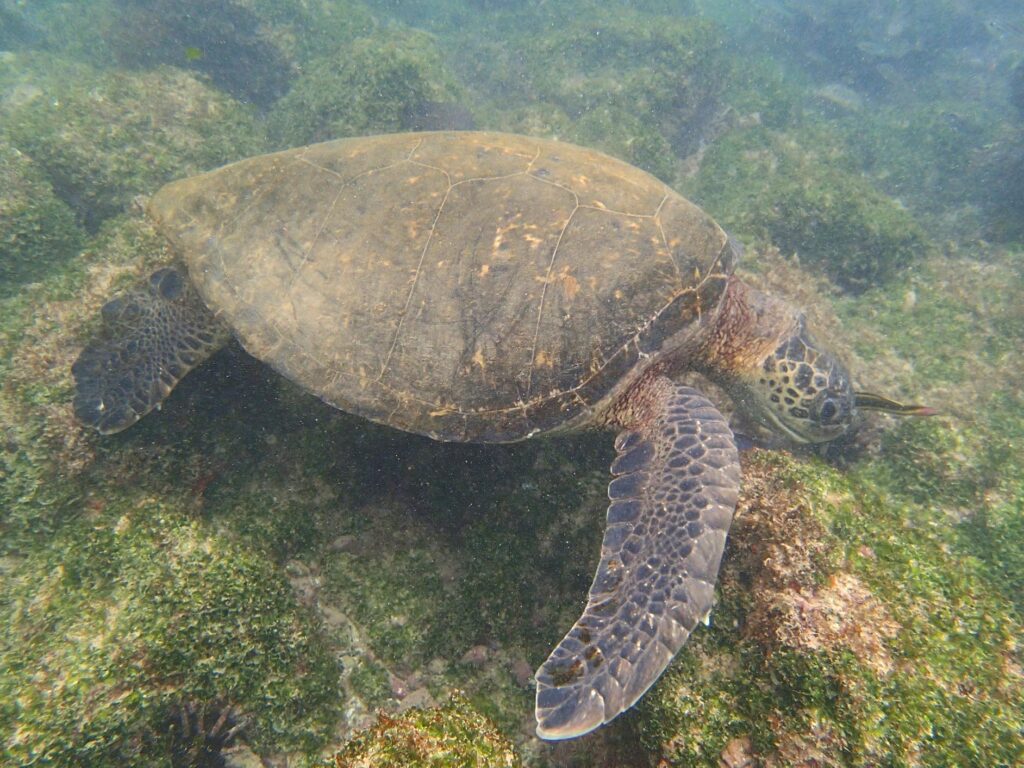 In 2018, I was honored to visit the Galapagos which are truly enchanted islands.  Often I felt like I was walking in a dream and wondering whether the experience was real. Being so close to this beautiful green sea turtle was the high point of my snorkeling experience.

Contributor Alex Munoz contributed the following story:
I once had encounter with a large sea turtle, It’s back was green with a light undercoat, I was swimming 100 ft from shore at the pier in Ventura, California. We swam together for about 5 minutes, I was astonished at how graceful it was and huge in comparison to  myself at age 17. An experience I have never forgotten.

This video is from the Sea of Cortez, Baja California and was shared by Diane Kaplan, Jen and Jordan Ganley.

“I felt excited to swim with the whale shark. It was humongous and I thought was it going to suck me up.” Jordan Ganley, 7 years old.
“All my fears disappeared when I saw how gentle the creature was.  The animal was so HUGE under the water.”  Jen Ganley.
“I had to swim on the side of the whale shark and keep up with it because  it could slam me with its tail. My entire body felt this intense calmness and excitement all at once. The whale shark was so powerful and calm. The whale shark  was on some level connecting with me.  It allowed me to share its presence like I was another fish. The whale shark touched me deeply and I felt at ease with it.”  Diane Kaplan 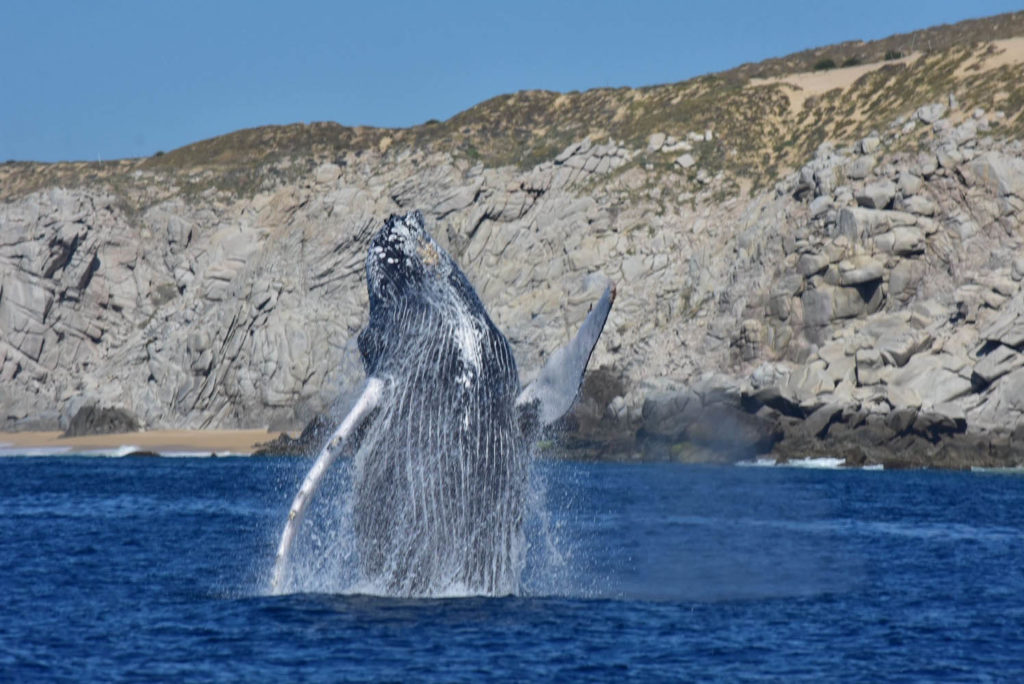 “Getting to see these majestic, gentle creatures breaching was incredible. Of course, I know that whales are huge, but it wasn’t until they breached that I got a real sense of their size.”  Jen Ganley 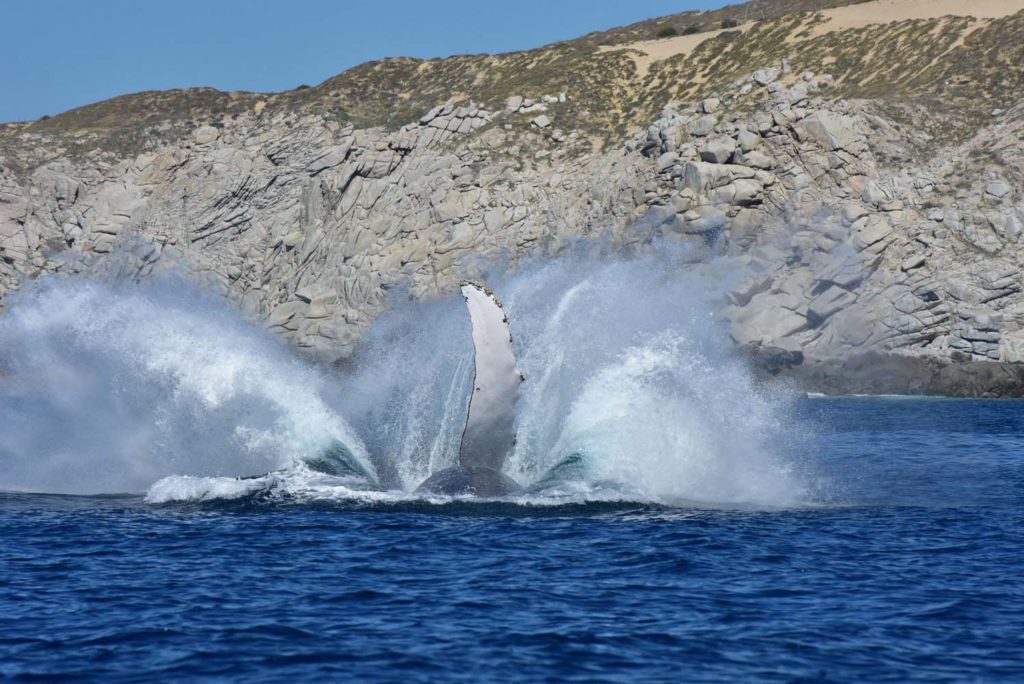 Diane Kaplan’s observation of  the humpback whale’s breach:
“It is impossible not feeling the powerful energy that emanates from Humpback Whales.  When you are close and they breach the full size and power of them is amazing.  Everybody always gasps and “oohs and ahhs” when their bodies slam against the water.  Tremendous gift.”

This entry was posted in Connecting to Nature, Whales & Oceanography. Bookmark the permalink.